We didn’t do a whole lot of fishing that Saturday, choosing to fish the morning at the cabin and then spend the afternoon watching football and sampling the rest of the beer we brought.  Little did we know it would be Les Miles’ last game, but I couldn’t have imagined a more fitting way for him to go out. 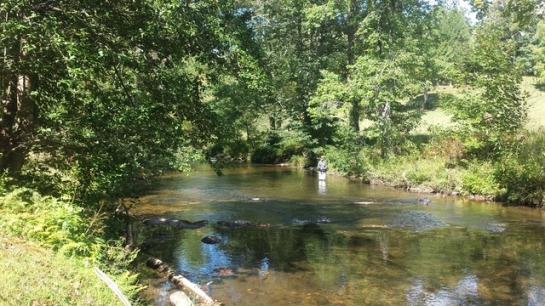 The fishing was still tough at the cabin, probably one of the least productive trips we’ve ever had there, but all it takes is one good fish to make a day, and lucky for me that fish crushed a woolly bugger I was swimming through a normally productive run.

It wasn’t a typical cabin trip, but we still had a blast.  It felt good to get out and hit some smaller water this time and remind myself why that was a big part of our trips in years past. I do enjoy kayak fishing, especially sightfishing redfish, but there is something about small stream wade fishing that makes it my absolute favorite type of fishing.

Listening to the local sports talk radio station at lunch here in the field and found out that today is the 10 year anniversary of the “Bluegrass Miracle”, one of the greatest plays in LSU football history. I definitely remember where I was when it happened too. I was a freshman at LSU, watching the game on TV at Aunt Lisa & Uncle Johnny’s house in Kenilworth, LSU had blown a big lead, wondering how we let this happen, to Kentucky of all teams. There wasn’t much hope for us with 2 seconds left and 80 yards to go, but when Marcus Randall bombed that 70 yard pass the stars aligned and it ended up in Devery Henderson’s hands, he then split the defenders and raced to the endzone, with Kentucky fans littering the field in early jubilation. One of the greatest plays I’ve ever seen on television and absolutely unbelievable when it happened. Watch it below and be sure to check out the piece that Jaques Doucet of WAFB just recently did for the 10 year anniversary:

Another home game this past Saturday for the Tigers meant another day of tailgating and Saturday night in Death Valley. Lots more opposing fans in town this past weekend and none of them were a-holes, so I wouldn’t mind having Washington on the schedule more often. Amanda and I are pretty bummed we didn’t make the trip up to Seattle a few years back, but it was right around our wedding. LSU played much better this week and really looked solid on all fronts; should be another great year for the Tigers. Here are some pics from the day:

Lunch, as prepared by the 10oz. tailgaters. 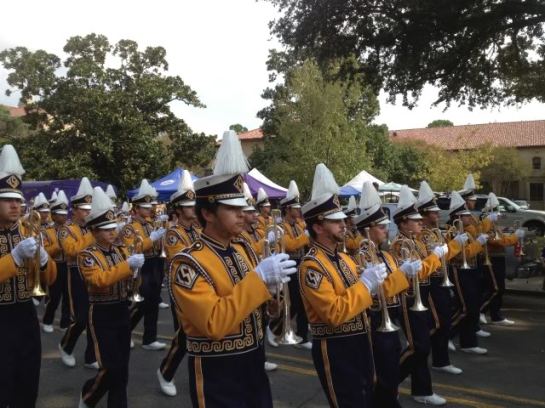 Actually made it over to the other side of campus to check out the band practice the cadence, then march toward the stadium.

Pleasantly surprised at our view from the upper deck. Really enjoyed that cool front too.

I won’t make next week’s game, but it’s for good reason. Blake and I head to Colorado Thursday on a trip that has been dubbed as Blake’s babymoon. Never heard the term until this year, but I embrace the idea. Gotta get one last trip in before life get’s real.

September Saturdays in Baton Rouge mean one thing – tailgating for LSU football games. First game of the season brought North Texas to town. Interesting to note that the past three trips by the Mean Green have accompanied hurricanes. Perhaps we should stop scheduling them. A brief photo sequence of the day’s events:

It was fun, look forward to the rest of the season. We didn’t play as well as I’d hoped, but maybe the team is just holding back for the rest of the SEC. A little better opponent comes to town this weekend with Washington, so we’ll see what happens. Geaux Tigers!

Isaac has pushed through Louisiana now and we made it through the storm surprisingly unscathed. We never lost power and received no damage that we can tell thus far. I can’t say the same for friends and family in Laplace who did receive some flooding, but everyone is safe and alive and that is really all that matters.

A screenshot of the storm as it made it’s way through Louisiana on Wednesday. The green pushpin is where we live and the eye is just to the south. The eye passed just to the west of Baton Rouge.

We had some shrimp in the freezer that needed to be cooked just in case the power went out, so we made shrimp enchiladas, and yes, they were delicious.

We got at least 5″ of rain on Wednesday, I don’t know the exact number since my gauge tops off at 5″ and I didn’t empty it until Thursday. Since Thursday we’ve gotten another inch. We’re still getting bands of storms coming in from the Gulf, which speaks to the size of this massive Cat 1 hurricane. Our rivers are swollen too, flooding is the biggest concern now. I don’t think I’ll be able to make a river float for awhile. Most of the rivers I fish are in the Florida parishes, which were among some of the hardest hit with rain this past week.

The silver lining in all of this is that there is still a Tiger game Saturday night. Can’t wait! (photo MORGAN SEARLES / The Daily Reveile)