Day 3 we woke up, packed up, drove by a better looking stretch of river that we didn’t fish last afternoon(the perils of having never been somewhere) and turned to head over another pass en route to our next destination and hopefully some Colorado River cutts.

It was another scenic drive and we even got to see the tail end of a moose as he hightailed it through the woods, no doubt spooked by the rally-inspired driver of a rental Kia Sorento.

This time instead of hitting the creek high up in the watershed, we went a ways down the road until we found a fishy looking pullover lower down on national forest land.  It was hard to see much of the creek from the road as it was being shrouded by vegetation, but what we did see we liked.  Deep undercut banks and lots of bends – this stream looked to cater to our style of fishing quite nicely. 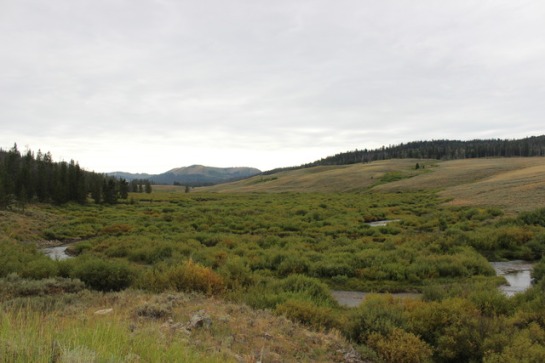 I swear, that feeling you get when you pull up on a place you’ve never fished and it just looks flat out gorgeous will never get old.  We suited up and hit the water and in short time Blake’s line was tight.  He caught a little one early to take that pressure off then followed it up with a brookie. 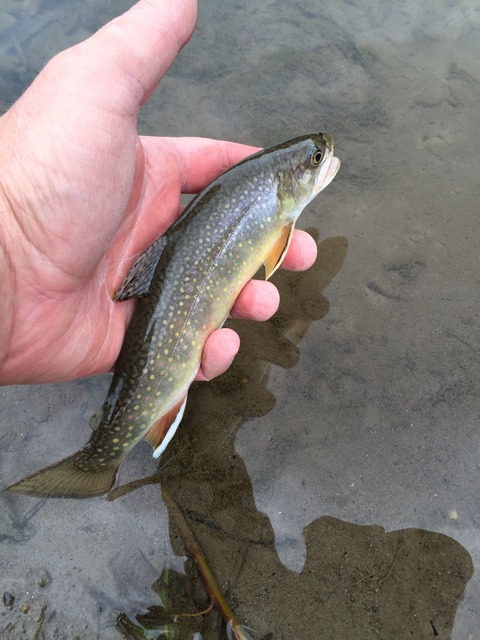 I followed suit and caught a cutthroat of my own. 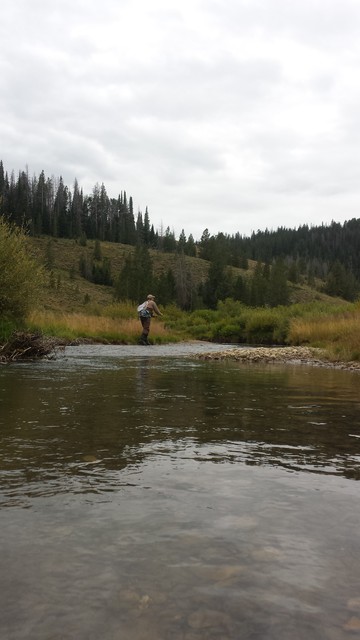 One Colorado River cutthroat down and the pressure was off for me as well.  Blake caught another small fish, only this one looked a little different, more like the Snake River variety – maybe a cut-bow? 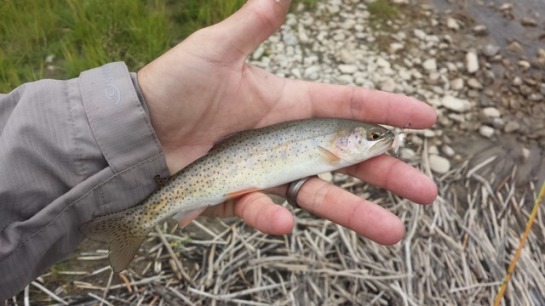 The streak of small fish ended when I tied into a good cutthroat.  It was the fish of the trip for me up to that point and was a real treat on the glass 3wt. 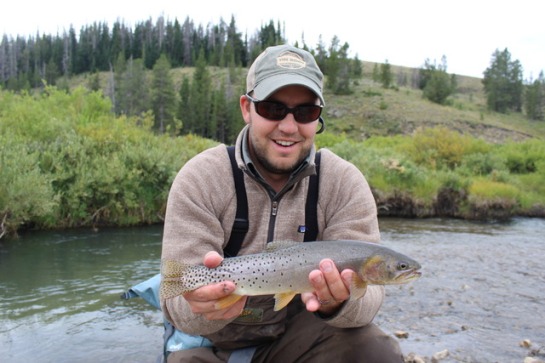 I’m not sure if I had even released my fish before I hear Blake saying he’s got one on in the next run.  I look up and see his 4wt glass rod doubled over and he is locked into a good battle trying to keep that fish from tucking back up under the cut bank.

No time to celebrate my catch as I was quickly called  into action to net Blake’s beast.

It was a beautiful fish, dark green on top and bright orange on the bottom.  You could tell this fish ruled the roost.  After back to back solid cutthroat we thought it may be about to turn on, surprisingly those were the last two cutthroat we caught out of this river.  The fishing did get hot, but not for cutthroat.  These guys took over.

I went up to the car to get a snack and it was like someone flipped a switch.  Brookies in every hole. 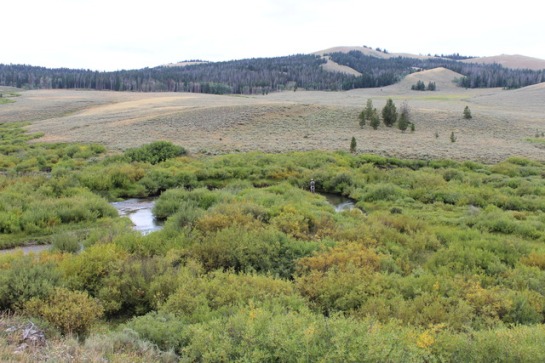 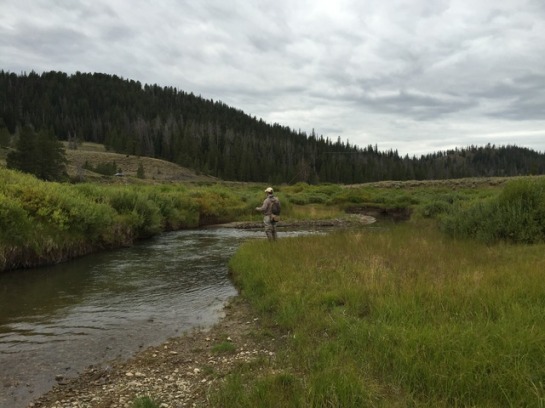 After a while we decided we had enough.  It was fun, don’t get me wrong, but that wasn’t the target species and we were starting to get hungry for lunch anyway.  Had those have been cutthroat, we may have stayed and fished all day – that’s how much we enjoyed that stream.  Nevertheless we headed into town, passing numerous large ranches on the way and a few pronghorn as well. 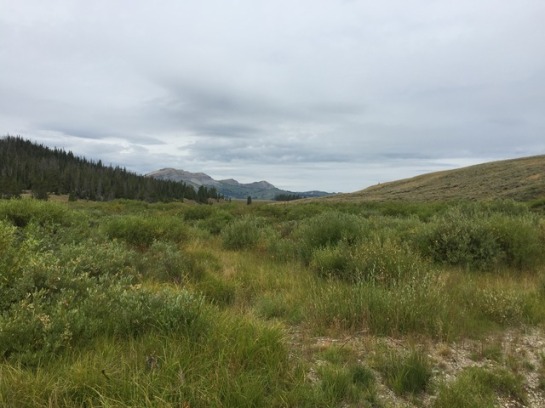 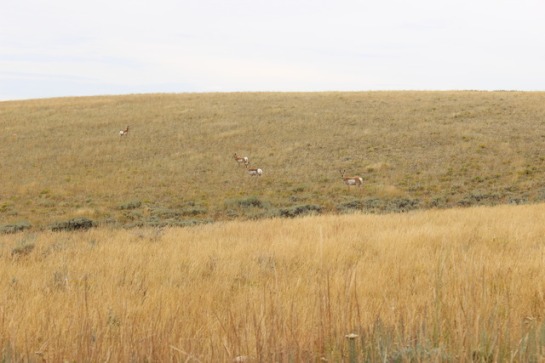 It was nice to get into town, get a new ice chest, hit the local fly shop, top off the fuel on our ride and get a proper meal in our bellies.  The local brewery was the only logical place for someone like me to eat.  I was surprised to hear 12 beers to a flight was an option.

Where else can you get a 12 beer flight for only $12?  You can’t beat that deal anywhere – Wind River Brewery in Pinedale made a fan out of me.  None of the beers disappointed and the burger was solid.  Sufficiently full we pressed on.  The plan was to camp and fish the Green that afternoon, but the clientele and windy weather at the campground we wanted to stay at convinced us to move on.  We decided we had enough time for the scenic route to Dubois and hit the road.

Near the top of the pass we crossed over a creek in a meadow that was unlike any other we’d seen.  It was slow, with sandbars and a dark tannin stain on the water.  You could see that a considerable amount of cattle used it’s waters.  We considered moving on, but after watching the water from the bridge and seeing a fairly large trout on the prowl, we decided to stop and give it a go.  We wouldn’t have much time if we wanted to set up camp before dark.

At a big pool, Blake and I split up, I took the left bank and he took the right.  Working our way from the back of the pool to the head.  It didn’t take long to figure out that I chose poorly.  Blake had a solid fish come up and sip his dry.  Kudos to Blake for not getting over anxious and pulling the fly from his mouth.  He played it cool and was rewarded. 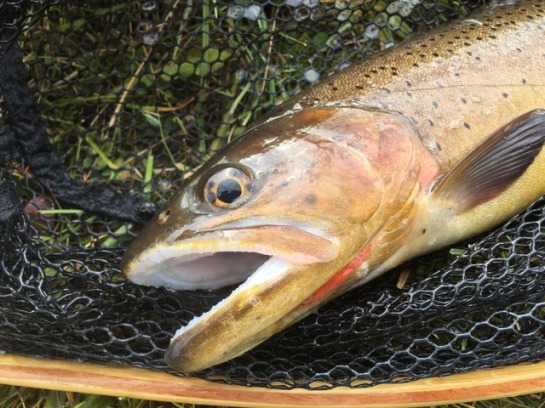 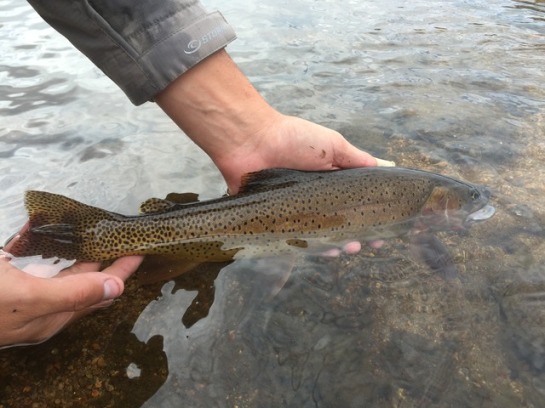 It was a beautiful cutthroat, dark, like the water.  My efforts to match Blake’s fish were futile.  The stream quickly changed character, added some boulders, became pocket water and we were running short on time.  All I could muster was a pair of brookies. 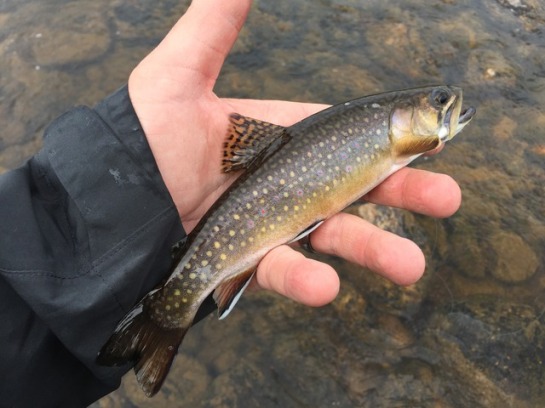 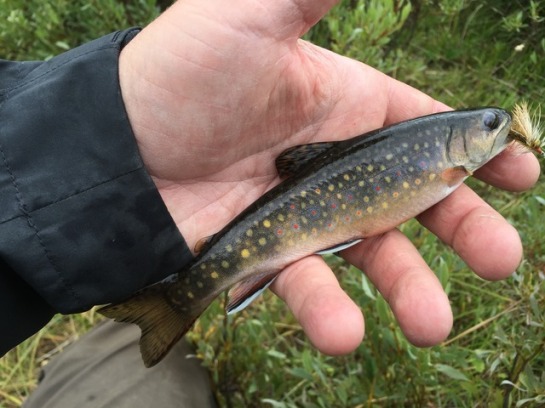 It was a great stop, wish we could have stayed longer, but we had to get going.  It didn’t take long to make it to the National Forest boundary and find our way back to asphalt.

We headed up the highway to the nearest campground and was surprised to finally see some other campers.  I guess that’s what happens when you camp off a major highway – on the weekend.  Still we were able to find a suitable campsite and manage to get set up before dark.  As was the case yesterday, another local was there to greet us upon arrival. 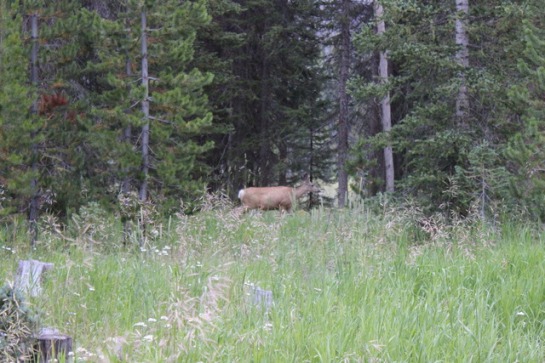 We had 3 out of 4 cutthroat species needed to land the slam.  Tomorrow we would wake up and make our way down the road to fish for the Yellowstone cutthroat and hopefully complete our quest for the cutt slam.