As I mentioned in the last post, I got my start in a Pelican Castaway, which is not a bad boat to start in:

The most important thing about the Pelican Castaway is it got me on the water, and for cheap.  It had terrible stability and paddled like a wet noodle, but I didn’t know any better and it floated, so I didn’t care. I had it for a little over a year before I found another good deal to pounce on that gave me a chance to upgrade.  A lot of good fish were caught out of the Pelican that year, which really helped indoctrinate me into the kayak fishing lifestyle.  I went from the Pelican Castaway to a Wilderness Systems Tarpon 120. 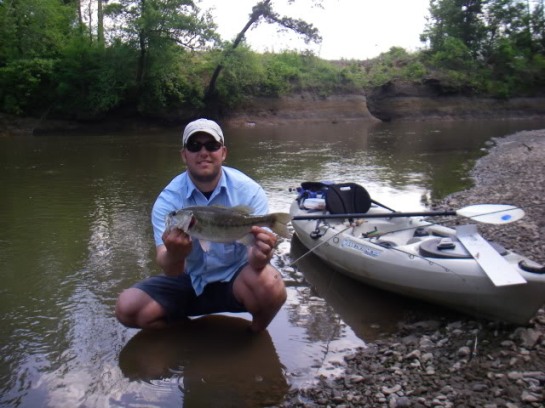 The Tarpon 120 was an excellent upgrade.  You could just look at it and tell it was a better boat than the Pelican.  It was a faster boat, with better tracking.  The quality of the build was so much better than that of the Pelican.  The Tarpon was the quintessential sit-on-top fishing kayak a few years prior to my purchase of the boat.  It was a great boat for me.  It helped that I got a great deal on it too.  Bought it off Craigslist from an old guy with a camp.  The only time he used it was when the camp flooded and he needed a way to get to and from his vehicle.  You can still find essentially the same boat in the Perception Pescador.  The downside to the Tarpon was the stability was not enough that I could stand and fish from it.  It also was not very comfortable to sit in on long trips.  I had the Tarpon for two years and like the Pelican actually made money on it when I sold it.  I got rid of it because I found another great deal on a boat – one that would allow me to stand and sight fish in, but still handle the rivers that we liked to fish.  Capt. Danny Wray put a couple of his Native Ultimate 12’s for sale and the deal was too good to pass up.  I called up my dad to see if he wanted one then made the drive down to Grand Isle and picked up both kayaks from Capt. Danny.

Owning the Ultimate finally gave me a boat I could stand and fish from.  I had actually gotten pretty good at kneeling and sight fishing from the Tarpon, but that does a number to the knees.  With the Ultimate I also got to experience the comfort of a nice, semi-elevated seat.  Getting my butt off the boat and having my feet lower than my knees while seated helped me to be comfortable longer.  I learned how to stand and sight fish from the Ultimate, it was a great boat for the marsh, and still is.  The Ultimate turned out to be an outstanding boat.  It wasn’t as fast as the Tarpon, but it tracked well.  It was light and easy to transport.  What I didn’t like about the Ultimate was that the standing area was not flat.  With the tunnel hull you had to put your feet in the tunnels and after a while they became cramped.  I also didn’t find it to paddle too well in swift water.  I fell out a few times, which in all likely hood was more my fault than the boat’s.  I actually didn’t own the Ultimate for very long, maybe half a year.  An incredible opportunity came up at that time to join my friend Drew Gregory on the Jackson team and I couldn’t pass it up.  He assured me that the Coosa would be a good fit for me and they wanted to see what it could do in the marsh.  That winter I made a trip up to the Jackson factory, learned about the company and how kayaks are made, met some of the other team guys and of course picked up my new boats.

The Coosa was a really fun boat.  Like the Ultimate, it was stable enough to stand and fish from and had the elevated seat that was comfortable to be in from the start of the trip to the finish.  The deck was wide open so standing was comfortable and fly fishing was very easy to do – no snags.  The Coosa is the best handling boat I’ve ever been fished out of, making it  the perfect swift water boat.  It’s home is in rivers and that is where it shines.  It performed well enough in the marsh that I didn’t notice a drop off in performance when coming from the Ultimate.  Where it lacked was it’s open water performance.  With it’s low draft and tall bow, it can catch wind like a sailboat and on open, windy ponds you can expect to be blown to the bank in no time.  The only time this was an issue for me was tournament time because tournament weather is always terrible.  It is a better paddling boat in open water when you weigh down the front of the bow a bit to get it in the water.  I figured that out because as I would catch and keep fish in the front hatch the boat was easier to paddle as the day progressed.  I owned a Coosa up until the Cruise came out from Jackson.  Like I said earlier, it is a fantastic river boat and I owned one just for that purpose.  It wasn’t long after the Coosa came out that the Cuda followed.  The Cuda, in both the 12 and the 14 ft versions has been my go-to boat in the marsh ever since. 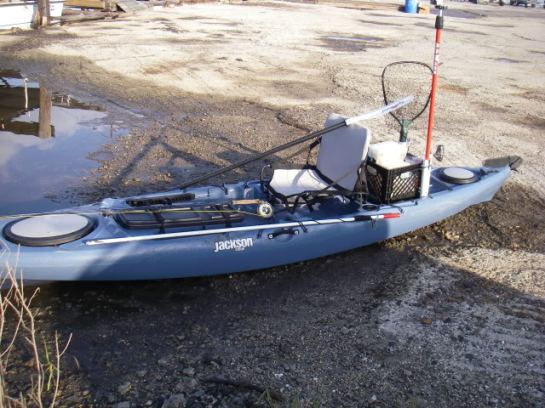 The Cuda has been an incredible boat for me, handling everything pretty well.  The 12 foot version you can take anywhere.  Not as fast as the 14, it is every bit as stable though.  The Cuda is a great platform to stand and fish from.  I have a love/hate relationship with the center hatch.  It catches fly line when fly fishing but that is easily solved by placing something over it, like a towel or a shirt.  I do love the center hatch for storage – whether that be fish or tackle.  No need to turn around and put your center of gravity somewhere other than where it needs to be.  The 14 is a bit faster and provides a bigger front hatch that I find more usable than the small hatch of the 12.  It is heavier though and not as easy to transport as the 12.  The 12 balances really well overhead because the weight is centered on the side carry handles.  You’ve got to compensate for that on the 14 (the Cruise too).  Both the 12 and the 14 have been great boats for the marsh and are better options than the Coosa for inshore fishing.  The Coosa is still the better river boat though.  I owned both until I saw a good compromise between the two was introduced from Jackson – enter the Cruise. 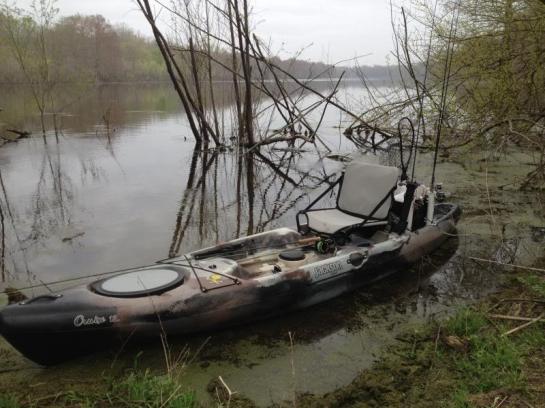 The Cruise, to me, is a simplified version of the Cuda.  I’ve always been drawn to 12-13 ft boats because they seem to be best size that does river and marsh fishing well.  They are also easier to store when living in a condo, which why I never had a boat over 13 ft until we built our first house and actually had a garage.  Like the Coosa there is no center hatch on the Cruise, which is a good thing for the fly fisher.  It also has the bigger front hatch found on the Cuda 14 – a much better option for dry storage than the small hatch.  The quick day hatch between the legs is convenient and stays dry.  The big plus on the Cruise is the price – right around $900.  In my opinion it is a hell of a boat for $900.

I started carrying two boats once we built our house and I’ve settled in on a Cuda 14 and a Cruise – for now.  The Cruise is great for the river and those small freshwater ponds I like to fish where the Cuda 14 is at home on inshore bays and in the marsh.  As a second boat the Cruise is a good boat in the marsh if I have someone that wants to tag along or if I’m looking to solely fly fish – that’s what I’ll take.  I’m sure another one day soon enough another boat will come along that catches my eye, but for the fishing that I like to do I can’t think of two better options than the Cruise and the Cuda 14.