In years past the Trout Challenge was a tournament I didn’t attend.  Not because I didn’t want to, but typically by the time it rolled around I was out of contention for the BCKFC tournament series and it didn’t make any sense, being a redfish guy, to drive all the way out to Big Lake to fish for trout.  This year has been a little different – the series is still wide open, I’ve had a couple decent finishes in the first two events and the Trout Challenge became a “go anywhere” event, meaning the entire state was fair game – you just needed to catch five trout and bring them back to Cabela’s in Gonzales for weigh-in.  With the tournament being in June it seemed like a no brainer that my best bet would be fishing in the surf, more specifically the Grand Isle surf.  The added bonus was that Gonzales was on the way home from Grand Isle, so I really wouldn’t have to go out of the way to fish.

With all this in mind I left work on Friday at lunchtime hoping to get a little bit of scouting in.  I was so confident fish were in the surf that I hit a marsh spot that holds trout in the Spring, just to see if they were still around.  I figured they wouldn’t be, but it was worth a shot to eliminate a spot.  I was on the water around 2pm and the first thing I noticed was the water clarity was not very good, which doesn’t normally bode well for trout fishing.  It was a bit high too, but all that aside it was still fishable.  It didn’t take long to paddle to my spot and within minutes there was activity.  It wasn’t trout, but redfish, they were wreaking havoc on the bait in the pond, specifically crashing crabs on the shoreline.  The amount of bait was unbelievable, shrimp popping out the water, fiddler crabs lined the shore of the marsh and blue crab worked the fringes of the oyster beds – it was a veritable redfish smorgasbord and they couldn’t help themselves.

I picked off a couple rat reds with a Matrix shad and was blind casting around some oyster beds when I got hung up.  Of course just at that same time a better redfish crashed a shore line within casting range.  I had two other rods handy, a popping cork and a topwater.  Opting for the topwater I bombed a perfect cast to the fish and before I could even work it the topwater got sucked under.  I’ve got to admit – it felt pretty good when that cast met it’s mark and the fish obliged. It was a slot red of around 21″ and proved to be the biggest on the day.  I caught one more red then decided that I should probably move on and locate trout since it wasn’t a redfish tournament I was scouting for. 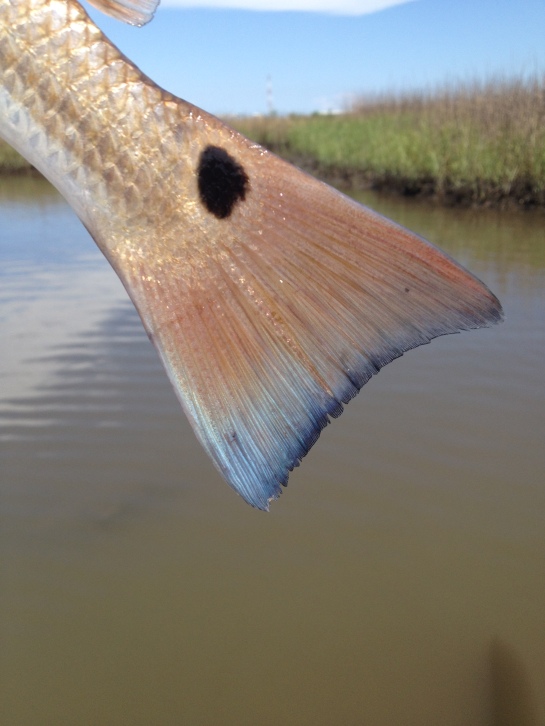 I moved on to the surf at Elmer’s and met up with my friend Jeff.  He had just made it out there and hadn’t caught anything yet.  We tried for awhile in the kayaks, but there wasn’t much doing.  The water off the beach wasn’t the prettiest and the beach itself was covered in sargassum – something that rarely happens down there so I’m told.  The beach was smelly and full of gnats as a result.  I parked the boat and started wade fishing.  The action was inconsistent but I was able to boat a couple keeper trout and threw back a couple more undersized fish.  I wasn’t convinced this was where I needed to fish in the morning so I had to come up with a different plan.

The plan I hatched wasn’t very creative, it just involved moving further down and trying the surf out front of Grand Isle in the morning.  I was sticking to my guns – the surf in June is the place to be.  Jeff decided to tag along and we met before sunrise the next day.  Dragging the kayak a long way from the public access, over a dune, through the sargassum, and into the water I really hoped the work would pay off.  We started working the rocks in front of the beach and as the sun came up every spot you could wade and fish was occupied by a body, most of the them with live bait.  We were reduced to throwing artificials only, but that didn’t matter as no one was catching fish.  The shrimp were thick behind the rocks, the wade fishers had no idea but they were popping all over the place.  If I had a cast net I could have filled my ice chest and gone home happy – I’ve never seen shrimp so thick.  I’m not sure that the fish weren’t there or that they just had enough food already, but we didn’t have any luck. After a few hours work we picked up and went to get a biscuit at Jo-Bob’s.  We had caught a few trout at Elmer’s yesterday so we may as well head over there to try our luck.

On the way to our spot at Elmer’s we ran into another buddy, Jason, and stopped to see how he was doing.  The news was bleak, but he had at least caught a couple trout.  The water still looked pretty nasty out there, but we decided to give it a shot.  We moved on to our spot where the water was a little cleaner and started catching fish.  Only problem was the fish we were catching were pogies.  Some foul hooked in the back, others near the mouth. They were big pogies too, pompano sized pogies.  Hopeful that big trout would be under the pogies we kept at it, but the only predator that was hooked was a Jack Crevalle that straightened out the hook on Jason’s bait.  After a few hours a white trout and a ladyfish were the only action I saw that weren’t foul hooked pogies.

It was a disappointing two days in the surf around Grand Isle, but I did get to enjoy fishing in the company of a few friends.  Besides Jeff and Jason, Blake was on the island as well to work on Saturday, he joined me in the surf Friday evening.  I made it up to Cabela’s for the weigh-in, although I had nothing to weigh, I at least got to catch up with a few other friends.  This was my worst outing in a tournament in a while, but I still had a good time and that’s what I love about kayak fishing.  The results of the tournament I’ll post below, but you can expect the usual suspects at the top again. 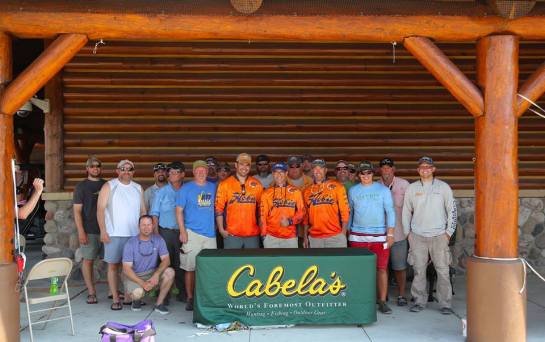 Big thanks to Cabela’s for hosting the weigh-in and donating prizes.  Also a big thanks to Jim Smith who let Blake and I crash at his camp on Friday night.  It was also good catching up with Jim and Bud Friday night, it had been a while since I’ve seen them, I know they did better than we did on Saturday.  I’m hopeful that my lack of success this past weekend was just a fluke and not a sign of something more serious as an article in the Advocate suggests: http://theadvocate.com/sports/9482816-32/veteran-anglers-concerned-about-speckled .  Only time will tell.