Hard to believe it has been almost five years since Blake caught his state record spotted bass.  It’s also hard to believe that back then redfish weren’t our primary focus, it was spotted bass.  We were intent on breaking a record we thought was very attainable – the state record spotted bass on the fly.  Don’t call us record hunters though as it took 2.5 years for one of us to finally land one over 2 lbs, Blake came through and landed two in one day.  I’ve still yet to catch one over 2 lbs on the fly rod.  Shoot, it’s a good day when you catch one over 1 lb!  Thinking about his record and after a short conversation I had with Mike Tringali about the Choctaw bass earlier this week, my interest in our local spotted bass has been restored.  I had to go back to the old Riverbassin’ forum where we relayed our trip reports to each other and read about Blake’s day again.  I think it is worth a share here(I updated links and edited for spelling and grammar from the original):

Well, August 14th was a good day that was about two casts from being one of the most frustrating days that I have ever had fishing. I had put in a few extra hours at work during the week and decided to take off to the stream, arriving around 2:30 in the afternoon. I started fishing and was doing pretty well on a crease fly catching above average fish in both size and number. I waded all the way to where I normally turn around and decided that I would just go one more bend in the stream just to check out what things looked like. Well, when I got around the bend I saw a deep pool that I figured would hold some nice fish. I was pretty surprised at what was about to happen. First, a little background about the stream, the average fish that we normally catch on the stream is around 9 – 10 oz and maybe 8 – 9 inches (maybe a little smaller). This day, I was getting bites from (not always catching) spotted bass that were ranging anywhere from 3/4 to 1 1/4 pounds on a consistent basis.

Anyway, I started casting in the last deep pool that I was going to fish and caught a pretty nice fish on my first cast.

On the next cast, I caught a fish that I believe would have surpassed the Louisiana state record spotted bass on a fly rod. So now I have a decision to make. I didn’t have my scale or a stringer and I was 1.75 miles away from my truck and would have to carry the fish all the way back. I decided to just bite the bullet and let the fish go, hoping that I catch it again in the future. This fish far surpassed any fish that I have caught in this stream in the past 2.5 years. Below is the picture that I snapped using the timer feature on my camera before I let it swim…

After this, I was pretty p.o.’d about not being prepared to catch a fish like this, this far away from the truck. So to pass some of the time on the walk back, I called Ben and told him that I thought I had just released the state record (he and I have been saying that we were gonna break the record and I even said that I would when I introduced myself on a thread on this site). Well, I get pretty close to my truck and it’s still daylight, so I figured I would fish a stretch that I didn’t have much luck at earlier in the day but Ben had caught a good one at on a previous trip. On my second cast I had a huge bite and set the hook. I thought I was caught on a log. Then the fish ran and I realized that I had a fish that was fighting harder than the one that I had released. I ended up landing the fish and in the end, It weighed 2.34 lbs and should be the state record. I’m still getting all the needed info together to send it in. Thought it was a cool story and figured I would share. 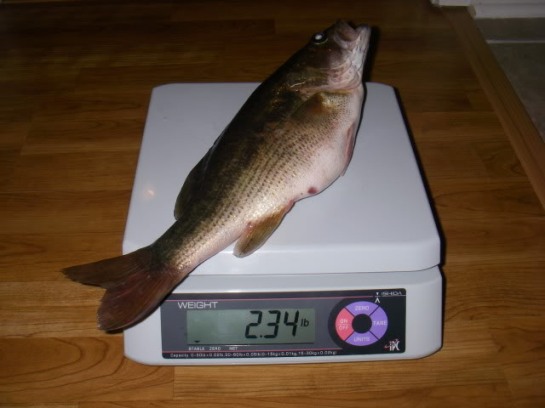 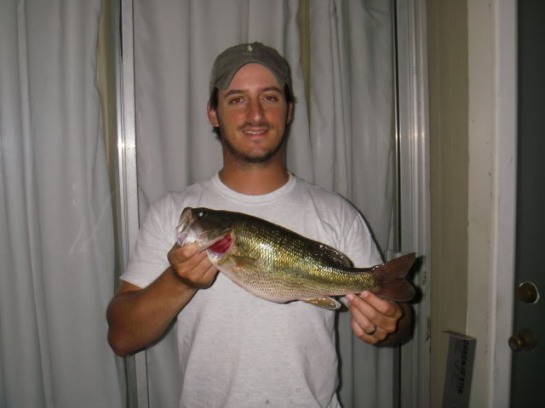 I had the fish weighed on a certified scale witnessed by two others (my wife and Ben), identified by a biologist other than myself, and signed off on by myself. The only thing that I have left to do is print out the pictures and send in the paper work with a 25 dollar check. I also have to send in the fly and leader that I caught the fish with.

I had the fish analyzed at work. Turns out that it was between 5 and 6 yrs old. The upper limit for spotted bass in the area is 7 years old. The fish had a 5 inch longear in it’s gut that helped push it over the edge on the scales.

I got to talking with some of the biologists that are doing spotted bass profiles in the watershed and have been included in the “collection” of fish from the streams that I fish. Looking forward to the next sampling day for sure 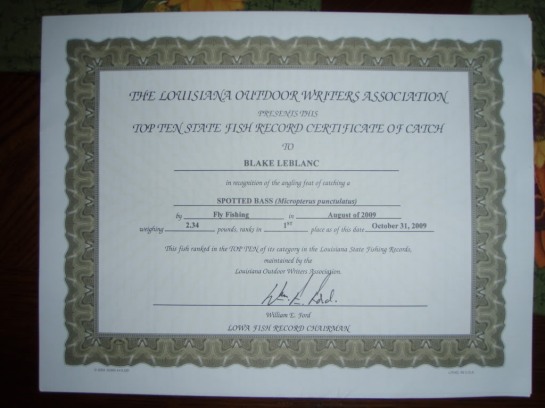 But I’m sure that it will be broken soon with Ben, Barret and I all really getting into the river fly fishing and spotted bass thing. Especially with the kayaks, it opens up a lot more and bigger water to fish. If it wasn’t $25 and I didn’t have to give up my fly and leader, I would fill up that list just to see my name on it nine times.

Blake had an incredible day that day and we followed it up a few days later with another great day.  No 2 lb bass were brought to hand then, but several 1+ lb bass were.  Most were caught on his crease fly which I’m going to go ahead and post that below as it is still an awesome fly to use for spotted bass.  He has also done an articulated version that you can find in the Fly archive, but this is the original, and Blake’s first SBS(Again, I took the liberty of editing the original for spelling and grammar).

The first step is to tie in the chartreuse marabou tail and the crystal flash on top of that. 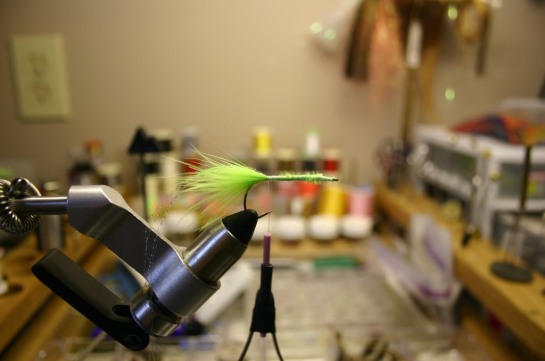 Next, tie in the olive marabou. I try to wrap the marabou all the way down the shank with thread so that I have something with a little bulk to glue the foam to. Cut the flash to about an inch behind the marabou tips. I leave it a little long as it can always be cut down later on.

Next would be to cut out the piece of foam using a template. I messed around with different shapes until I found a shape that suited most of my crease flies and then made the template out of card stock. 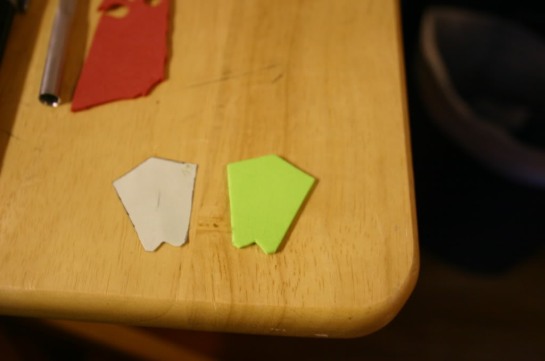 Color the foam. The metallic markers don’t dry right away, so I make a pretty heavy line and smear it with my finger to get the faded look from top to bottom. I find it easier to draw the lateral line and add eyes after the fly is glued, but it doesn’t really matter if you do it now or wait until after. 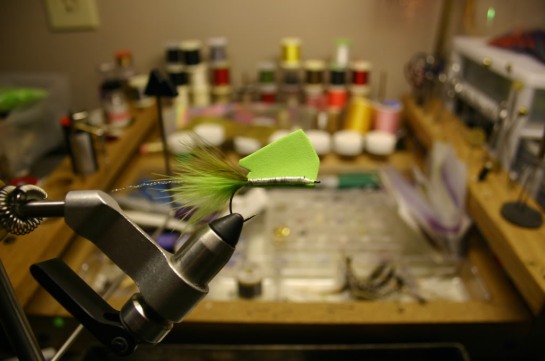 Then glue the other side. 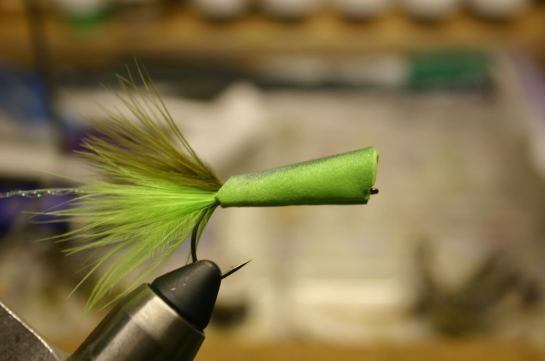 I then draw the lateral line and add the eyes and the gills(I use both googly eyes and stick-on eyes).

I cut a hole(using a hole punch) from some red foam and insert it in the end of the fly using my bodkin. I use super glue to secure it in place. The second picture shows the closed ends of the foam on the bottom of the shank and also the red plug in the mouth of the popper. 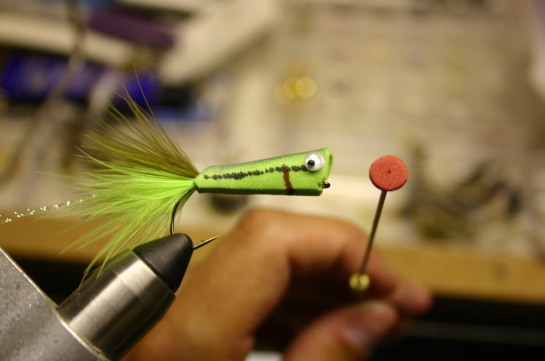 The white baby bass is another good pattern. For it, I would substitute white marabou for the chartreuse marabou. I also colored the mouth part red on this fly. No reason why, just thought it looked good.

I then add a light coat of 5 minute epoxy for durability – finished fly.