That just may be my favorite music video.

I fished a tournament this past weekend, Bayou Coast’s Minimalist Challenge.  It’s got a unique format as they provide you with the tackle you’ll use for the day. Five soft plastics, five jigheads and a topwater is what was provided. The goal is to catch and weigh as many legal trout, redfish and flounder as you possibly can.

This has never been my favorite tournament, not because of the provided tackle part, I actually like that – it simplifies things.  Rather, I hate that I may actually have to keep forty fish, which will likely never happen, but I hate the idea – that would be some day though right!

We had a shotgun launch at 6:00am from Leeville and 125 kayak anglers spread out across the adjacent marsh.  I knew early on I wanted to put some distance between myself and the launch because frankly I don’t like fishing with a crowd. 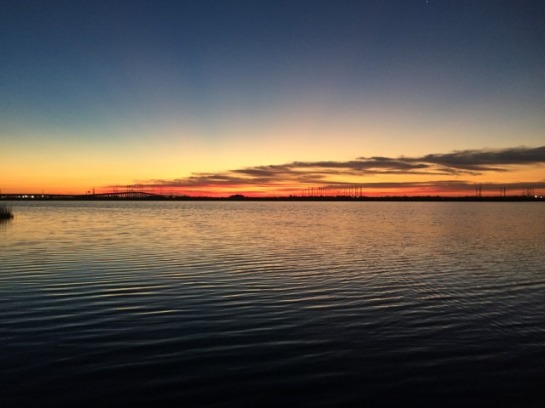 I made my first stop on the backside of an island where a trenasse emptied into a larger bayou.  Clear, moving water was being swept around both sides of the island and my first cast toward the island was inhaled by a junior bull of about 32″.  It took a while for me to figure that out though because he shook his head like a big trout and nearly gave me a heart attack. 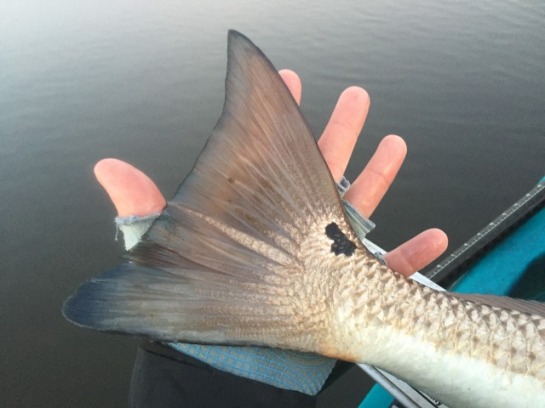 After a good fight and a few quick pics I sent him on his way (can only keep slot reds for BCKFC tourneys).  A few more casts and I soon began catching trout.  In short time I had six in the boat, from 14-16″, and then I found out I hadn’t put enough distance between myself and the launch.  Some dude had the nerve to paddle right through the spot I was catching fish even after I told him to come around behind me.  I was displeased so I pushed further.  As I got further I decided to sabotage my tournament plans and target bull reds.  The weather was too nice not to.  Winds were light, water was clear, the tide was right, and we’d have plenty of chances for bright sun.

I paddle-poled my way through a lot of good looking water looking for redfish sign, but really wasn’t seeing much of anything.  Finally as I was working the flat of a long, wide bayou I started to see some activity.  At the mouth of a smaller trenasse I caught one that went about 33″. 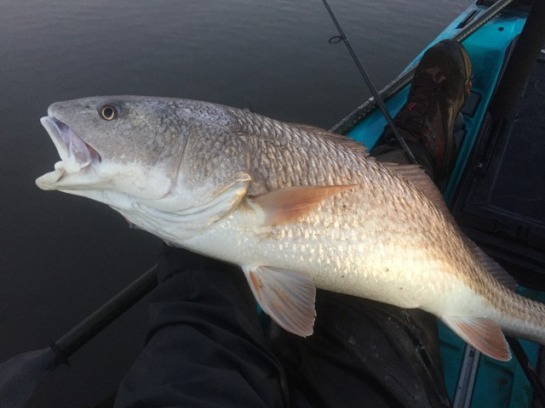 Then later I spotted a pair of bulls cruising the shore and was able to pick off the closer one with a good cast.  He went about 35″. 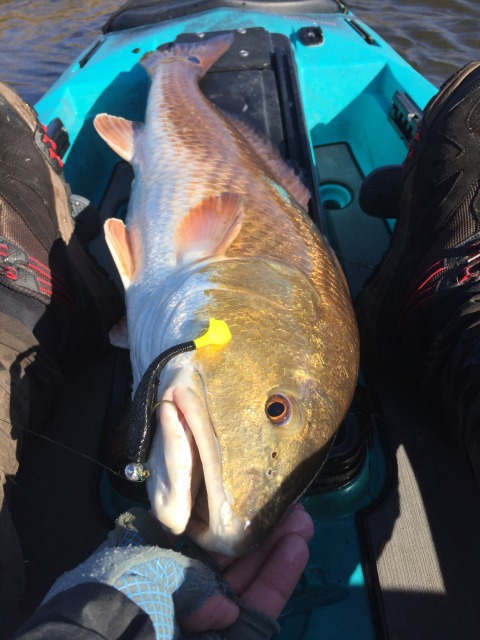 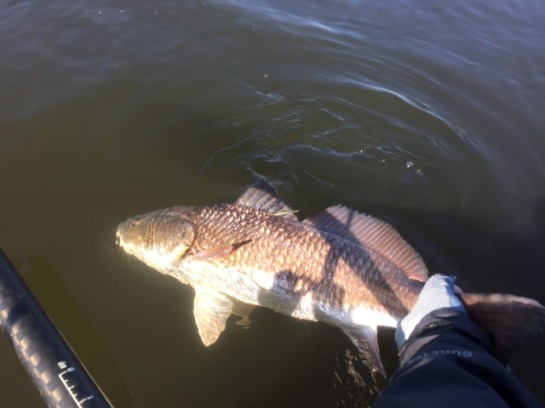 Each of these fish I tagged and sent on their way.  They weren’t tournament fish, but I didn’t really care.  When conditions allow for sightfishing bull reds, that’s what I want to be doing, so that’s what I did.  I hooked up with another fish after I rounded the corner into a cut and saw him cruising down the shoreline toward me.  I didn’t get him to the boat though as he eventually spit the hook.  He was another junior bull, not a monster like I was hoping.

I finally decided enough had been enough and I may as well weigh what I had, so I made my way back toward the weigh-in, figuring I might be able to run into some slot fish along the way.

I did run into slot fish, that were way up in the skinny water ponds, but they were the spookiest fish I’ve ever encountered, I couldn’t get them to bite to save my life.  It is a strange day when sightfishing bull reds is easier than catching slot fish.

I picked up a few more trout under the Leeville bridge along the way, but really I had already conceded the tournament.  It was a sabotage and a successful one at that and I would do it again if given the opportunity – it was a lot of fun.