This past weekend the city of Houma played host to the IFA Kayak Fishing Tour Championship. Having fished both the Empire and Grand Isle events earlier in the year I was eligible to fish the Championship. The Championship was a two day event in which a total of four fish would be scored – your longest trout and redfish from each day. The winner would be that person with the largest total aggregate length. Boundaries were anywhere within the state of Louisiana, so it was up to each angler to decide how much driving time they wanted to commit to. Everyone would have to drive somewhere to fish and Houma provides a pretty central location to most of the kayak-friendly saltwater fishing destinations found along our coast. Being most familiar with the marsh between Golden Meadow and Grand Isle, I decided to stay and fish along Hwy 1.

This was my first year fishing the Championship, I’ve fished single Louisiana division events in years past, but was never able to fish both and give myself a chance to fish in the Championship. This year I was joined by fellow Jackson team member Jameson Redding, who did pretty well last year in the Championship, which was held in Chalmette, finishing fourth overall. Not bad for a first time Louisiana fisherman. We were joined on day one by Charlie and Melita Ganoe, also on the Jackson team, who were in Houma visiting family – great timing on their part.

As with seemingly every tournament the weather would factor into the outcome. A cold front was blowing through over the weekend which made things tough on every competitor – there was no avoiding it. Friday’s weather wasn’t the best, but after experiencing what Mother Nature sent our way Saturday, it was a blessing to have Friday. It was overcast and probably blew 10-15 mph throughout the day which made you have to put a little extra effort into every paddle stroke. The day began rather inauspiciously when I found the launch I like to use had gone from public to private. Awesome, time to come up with Plan B on the spot. I decided we should launch from a popular roadside spot instead, although it was somewhere I barely fished conditions should be similar to what I was planning to fish. After launching I parked myself in a cut that had a good bit of moving water. I was able to get on the board early with a 19″ red.

That was followed by a 16″ flounder which was unfortunately not a target species in this tournament, but I know where he lives come Paddlepalooza time.

I moved on and fished cuts and points, alternating between a topwater and a popping cork, looking to pick up a trout and at least get two fish on the board. While throwing my topwater on the back side of a wind blown point I had an enormous blow up right next to the boat. It was a nice trout, the biggest I’ve ever caught in the marsh. When I got her in the net she looked to be about 4-5 pounds. I put her on the board and could only squeeze 22.5″ out of her though, what a fatty! 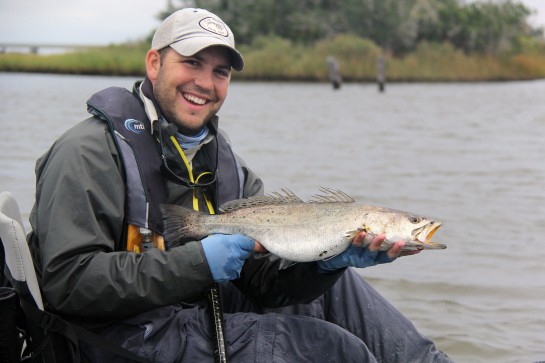 Working that topwater around a different point produced a similar result.

This one was just under 20″, so not an upgrade, but still a lot of fun to catch. It was highly unlikely that I’d be able to upgrade my trout, but I could definitely upgrade my redfish so I headed into a pond to look for an upper slot red, or really anything bigger than 19″. Normally in these weather conditions sight fishing would have been impossible, but redfish are suckers for crabs and I could hear them crashing the banks going after them, so call it “sound fishing”, that’s essentially what I was doing. I would paddle around quietly and listen. I was still watching the banks but redfish would often give themselves away by crashing the banks.  Eventually I ran into a redfish that had no business being in the pond he was in as it was no bigger than my living room and there he was with his entire back out of the water.

31″ was certainly an upgrade and a really good find for a marsh red. At this point I was pretty pumped sitting at 53.5″. I knew guys were going to go out and catch big bull reds and big gator trout around the passes and at the MRGO dam, but this was 53.5″ in the marsh, definitely the best day I’ve had fishing the marsh this year, and this was a last second Plan B at that!

So I probably should have kept paddling toward the big bays to look for a bull red, but I stayed in the marsh and played with the redfish. They’re just too much fun to pass up and that’s why we’re out there – to have fun. 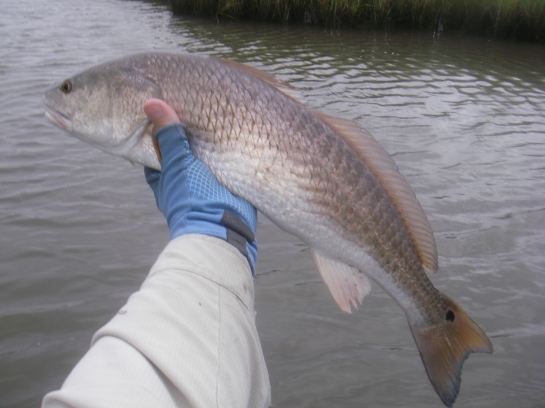 Caught a few more reds in the ponds on the fly rod, including the above leopard that had 7 spots and even got another flounder in a cut. Plan B ended up being pretty badass. A slam spot with leopard reds? Not too shabby.

We loaded up the kayaks and headed up to Houma to weigh-in and see how everyone else had done. Jameson and Charlie each had a trout and red as well, so we all had some success. It was evident when we got to the weigh-in that everyone else had pretty good days too.

53.5″ was good enough for 13th. 13th, are you kidding me? I knew there would be some that came in with 60+”, but I figured that would be a handful. 53.5″ would have won numerous single day events across several divisions. Folks came with their A-game to the Championship. Still it felt pretty good to have a good day on day one to set myself up to be competitive on day two. The tournament paid out to fifteen places so that was my goal for day two.