On Tuesday we let the girls do their thing while Dad and I went on a guided trip down the Henry’s Fork. It was pretty nice to devote a full day to fishing. Our guide was Derek Hobbs with Trouthunter and at his suggestion we hit two different sections of the river; Box Canyon before lunch and a section downstream of Railroad Ranch after.

The Henry’s Fork was an interesting river, the two sections we fished were just a few miles apart, but they were totally different from each other. Clarity was excellent at both spots as the river was loaded with submerged vegetation. With that much salad the river was also loaded with trout food. Cased caddis covered the rocks and tricos were pretty thick as we showed up to the launch in the morning. Dad started catching fish almost right away while I was still working the kinks out. 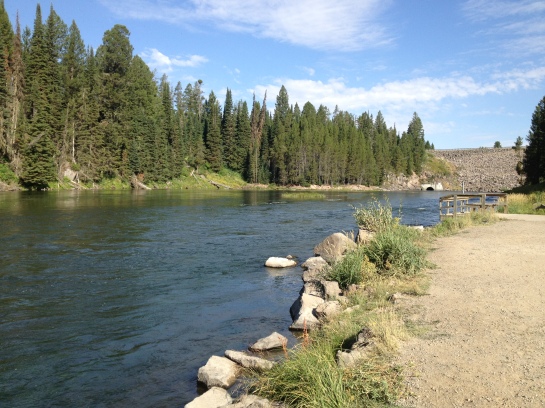 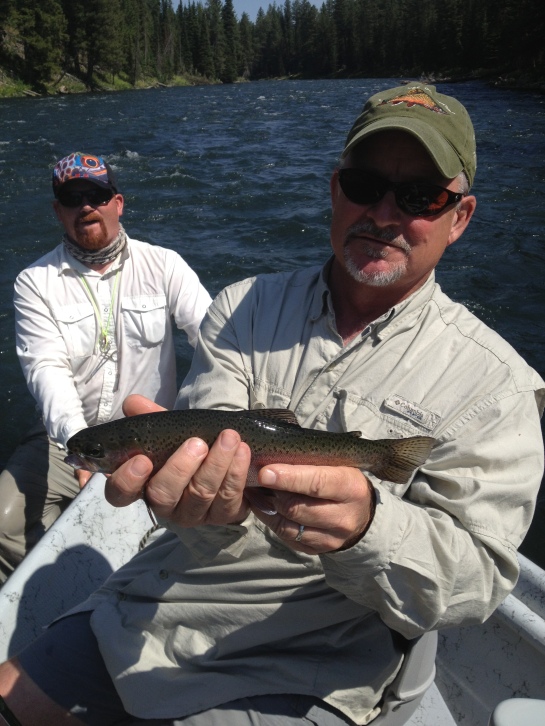 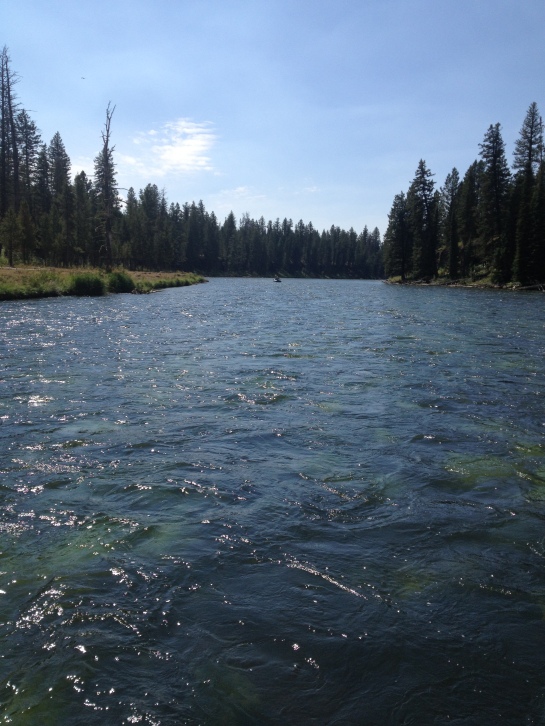 Once I finally got a fish to the boat I began catching them pretty regularly, though they weren’t much on size. 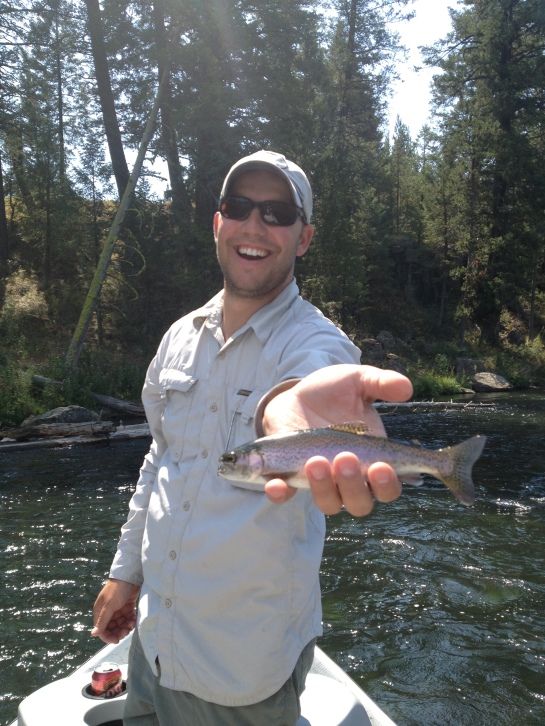 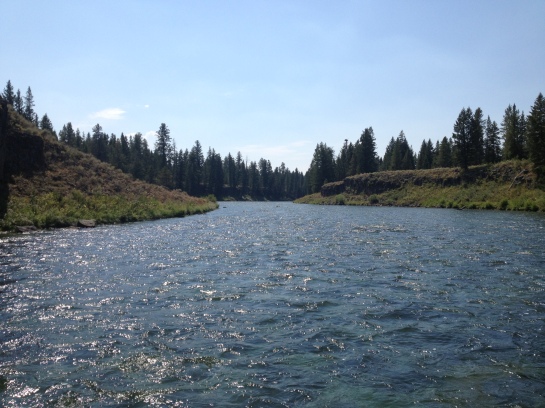 Fishing ended up being pretty good for me on 8-12″ rainbows throughout the Box. Dad was able to get into the bigger fish and from the back of the boat no less. He caught a couple of stud whitefish and pretty much all the bigger rainbows we had on the day. 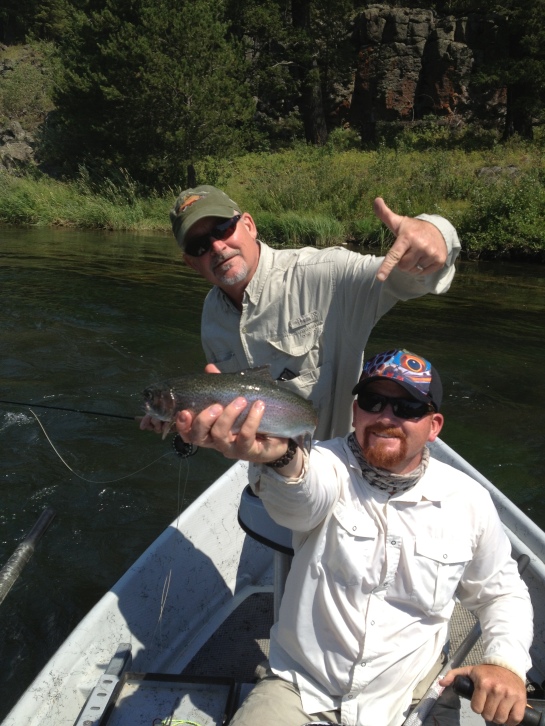 I landed some whitefish of my own (a new species for both of us) though, like the rainbows, they weren’t very big. I finally managed to get a respectable rainbow toward the end of our float through the Box. We didn’t catch any monsters through Box Canyon but we did catch a bunch of trout, which is exactly what Derek told us would happen. I did briefly hook into a fish that surprised me, it was much bigger than what we had been catching, but it wasn’t on very long. 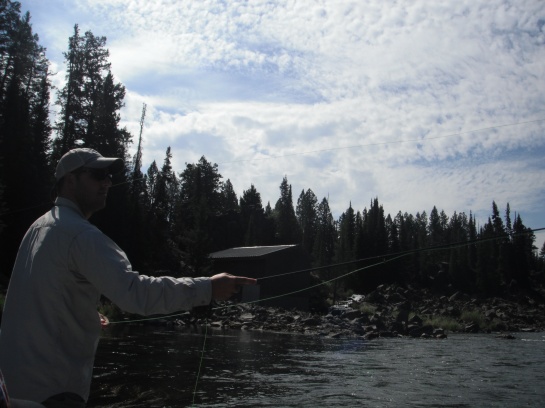 After lunch we picked up and headed down the road. Derek told us this was where our big fish might come. The Henry’s Fork flattened out in this section and the current slowed down big time. The submerged veg was much thicker down here as well, it was matted up in spots where the river was real shallow. 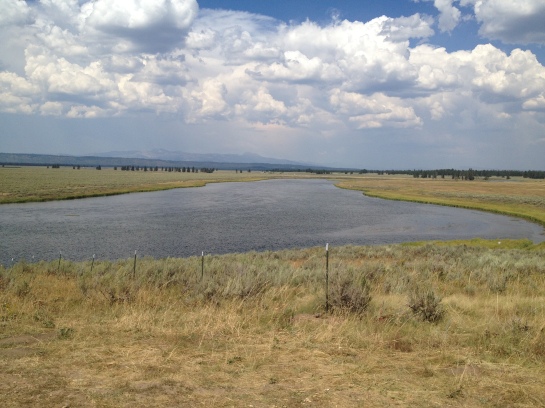 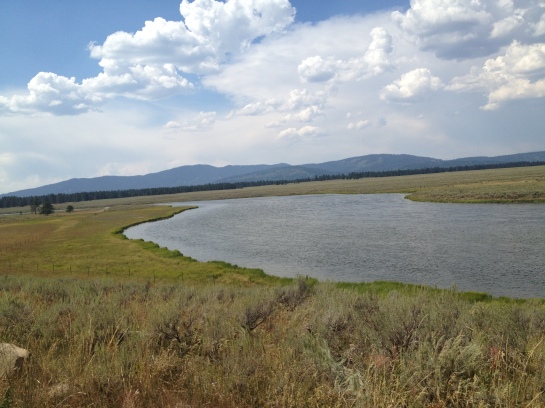 The water here was even clearer than in the Box and the fishing was tougher. As we floated downstream we saw the fish we were after. And sure enough they were bigger here than in the Box. Pods of trout would move out of the way of the boat as we floated by them. It was both exciting and frustrating to see, knowing you’re floating that big hopper right over these fish and watching none of them take it was a test of patience. I think I had one or two that came to inspect it, one swirled under, the other I missed the set. Toward the end of the float the current picked up and the river fished more like the Box. I ended up catching a few more small rainbows to get rid of the skunk on this section before we reached the take out. 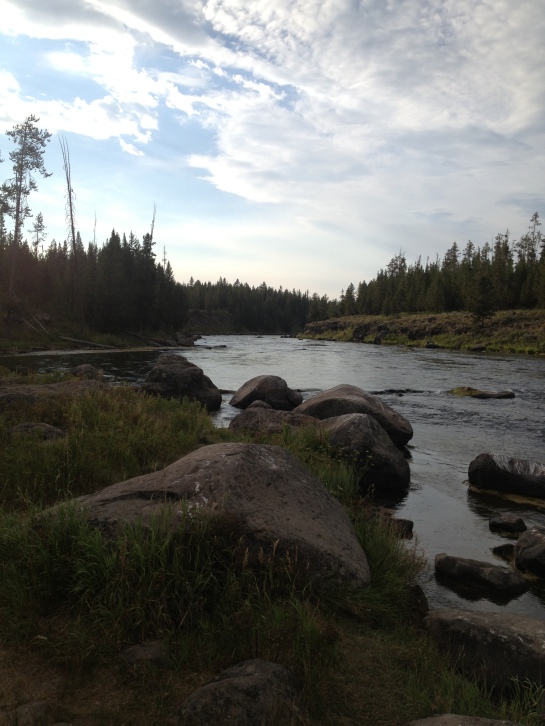 What a challenging stretch of water, I couldn’t imagine a more polar opposite for Box Canyon than that section downstream of the Ranch. We went from easy to slim pickings in just a short drive down Hwy 20 (which has to be the longest main street in the country, the city of Island Park is huge!). The Henry’s Fork was a beautiful river though and I can see why it has been written about and fawned over by nearly every fisherman that has the pleasure to fish it. It seems to be a virtual fish factory, what a resource. Derek was a great guide who made every effort to put us on fish, especially in the afternoon. I could tell he wanted us to get one of those big boys bad, but it just wasn’t in the cards.

The girls ended up back in the Park while we were fishing as the boardwalk at Grand Prismatic Spring had opened up. We didn’t get to see it in person, but at least they did. Before heading back to the cabin they shopped in West Yellowstone and did a little driving around Island Park. Mom was really excited to find an aspen with her name carved in it. It’s a sign I tell you! 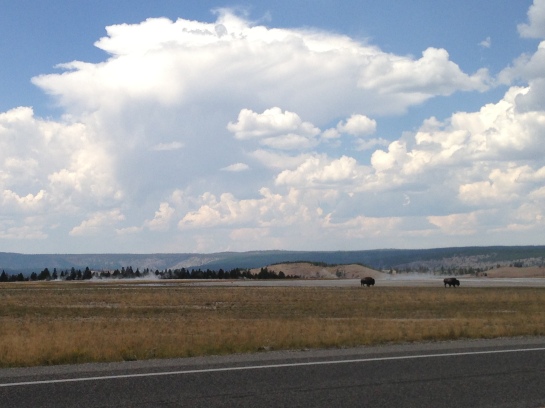 That evening we had dinner at the cabin then went outside to sit and enjoy our last cool night in Idaho (the weather was awesome the entire trip) before we had to head back to the heat and humidity of the South. As we sat outside I noticed something dark in the distance of the backyard. It looked like a cardboard cutout it was so dark, but once it moved there was no doubting it was a moose! It was very timid, not like the moose we saw near Jackson. Soon enough we saw why, it had a young calf with it. What a great way to end our stay in Island Park.