Back in October as the RSFF Jambalaya Challenge was beginning to wind down, Chris Williams and I made it out on a creek in search of shadow bass. Shadow bass are not a species you can directly target IMO, but we at least made it out somewhere that I’ve caught them before, so I figured our odds of seeing one were at least a little better there. This was the first time Chris and I had fished together and I was glad we were able to make it happen.

We got an early start that morning and had an unseasonably Fall-like chill in the air when we first stepped in the water. It was cold enough that it took a little bit of time for the fish to warm up and become active.

The first fish I came across was a blacktail shiner, a fish I had come across earlier in the year and a common catch on the creeks that I wade fish here in south Louisiana. I caught a striped shiner soon after that and unfortunately for me he came off the hook before I could get a photo. That would have been another species on the list so a bit of a bummer. Soon enough the normal targeted species began to show up as well; the longear sunfish and spotted bass.

The fishing remained pretty slow for most of the morning into the afternoon, but Chris did well to add three species to his list; striped shiner, blacktail shiner, and spotted bass and put a little distance on his Jambalaya Challenge lead.

Unfortunately we didn’t turn up any shadow bass on our trip, which was not wholly unexpected. Like I said before, they are difficult to target directly. They are always bycatch for me and I certainly don’t catch one every time I fish a creek. As my mom would say “maybe we just weren’t holding our mouth right”.

I enjoyed my day on the water with Chris and I know we will do it again soon. We still have to track down a shadow bass for him and he knows where to go to catch chain pickerel in Louisiana, which is something I’ve yet to do.

I never got around to writing a report until now, but back in June I found the time to wade fish a Feliciana parish stream with the long rod.  I made it on the water as the sun was rising and actually caught a bass on one of my first few casts.  The action was slow after that, but it was, and has always been, time well spent and a great way to beat the summer heat.

The usual suspects were around – spotted bass, longear sunfish, and bluegill, but I also had the pleasure of catching another shadow bass.  This was likely the biggest I’ve ever caught too.  He came off some submerged timber in the very middle of a deep bend in the creek I was fishing.  True to form, he hit a dead drifted crawfish pattern I was running behind a big hopper.  It’s always fun to catch these guys as they are pretty unique.

Google Earth tells me I fished maybe half a mile before I was ready to call it a day and turn around to head back home.  It never fails that when I’m fishing I think I’m covering at least a mile, but in reality it is always much less.  It’s funny how that works.  It makes you wonder about all the untouched water that lies beyond a mile or two from an access point?  How much better is the fishing if I put in the work to get there? 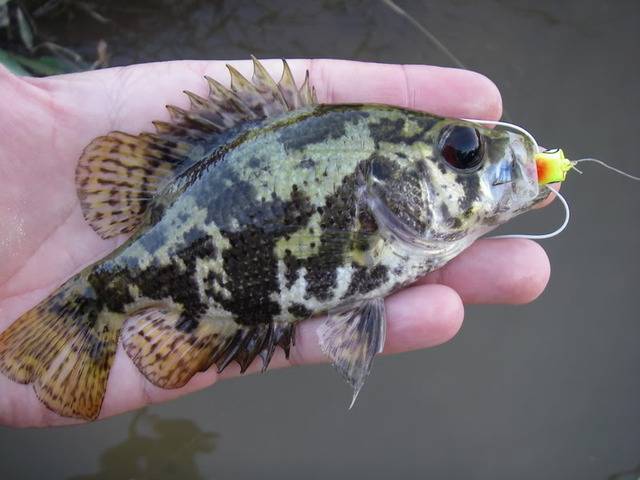 I wanted to take a moment to profile one of the more unique fish found in Southeast Louisiana – the shadow bass (Ambloplites ariommus).  In Louisiana they are only found in the sandy creeks that drain the Florida parishes – you won’t find them anywhere else in the state.

I’ve caught maybe a handful in my life as by-catch while fishing for spotted bass or longear sunnies.  They hold real close to cover and don’t stray far from their hiding place to strike a bait.  I’ve caught them on poppers and subsurface nymphs so they are fairly aggressive eaters, like their sunfish cousins.  They are very closely related to rock bass (Ambloplites rupestris) and resemble them in appearance.  Their black-and-white mottled pattern makes them fairly easy to ID, especially when they are the only Ambloplites in the watershed like the ones here in Louisiana.  The pattern can be well defined or somewhat faint, but combined with the big dark red eye they are hard to mistake for anything else. 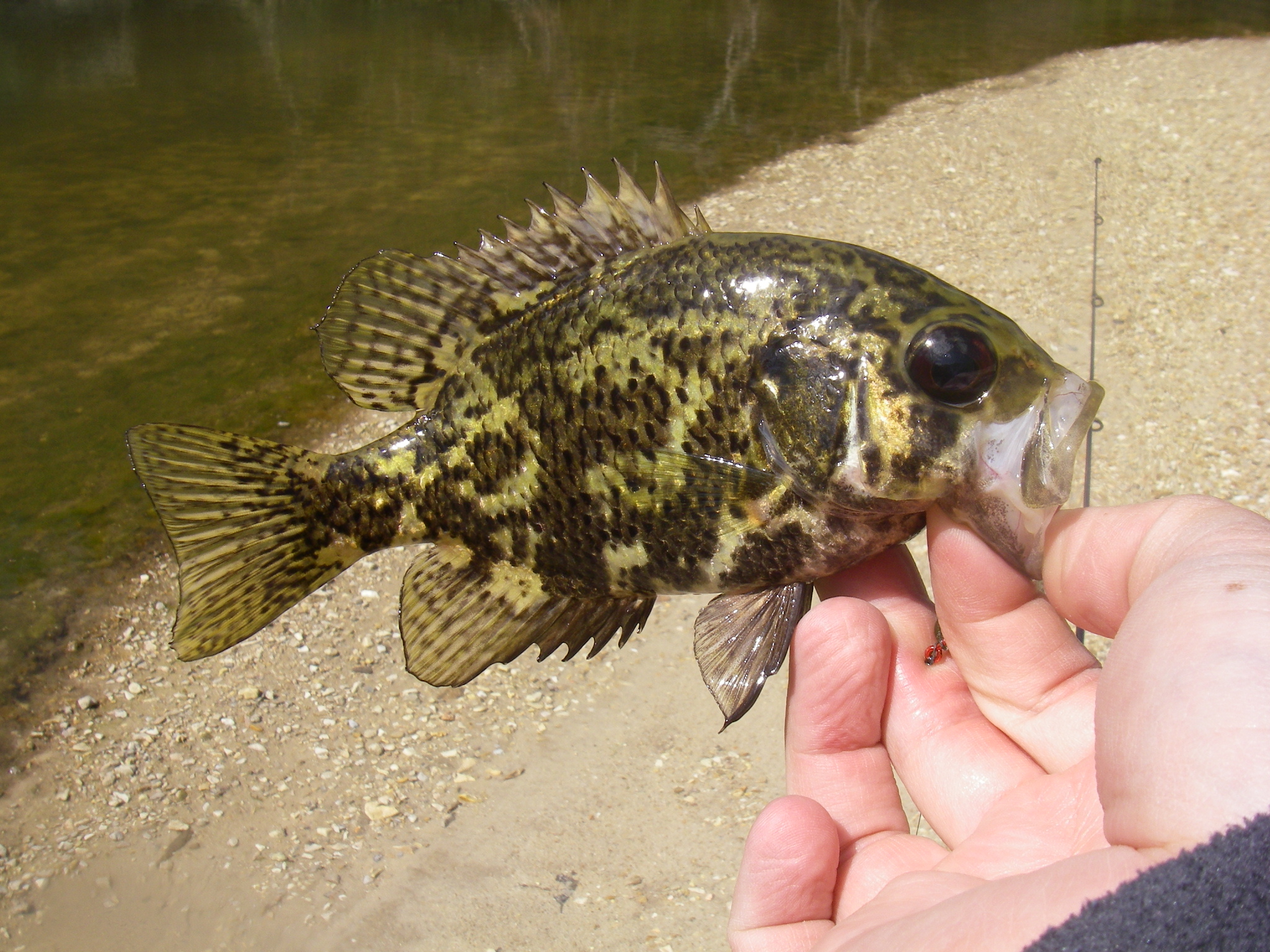 They don’t get very big, a record was established in Georgia at 10 ounces, 9.25″, and I’d venture to guess that is about as big as they’ll get around here as well.

Keep an eye out for them if you do any fishing on rivers and creeks on the Northshore.  If you spend enough time on the water between Baton Rouge and Slidell I’d imagine you’ll run into one one day and now that you’ve read this post you’ll know what it is.