Our last full day at Georgia was spent fishing at the cabin. Hard to argue the decision after the success we had our first day there; we were basically having withdrawals not hitting it the the day before. It was another good day with some quality fish caught, though not quite as many as on day one. On day one trout were holding all over the place, by day four water levels had dropped and clarity improved a good bit. Instead of getting hits on lousy drifts, you actually had to concentrate and work the water over, hitting every seam where they might be holding. When you got a hit though it was usually a quality fish. I finally lost the Upper Colorado rig that worked well the first day, but Blake had tied up similar stonefly patterns that worked nearly as well, one of them I’ll have up for an SBS pretty soon.

The first fish I tied into on the day was a strong fighter, made several jumps and ran me downstream to the point where I had to actually follow the fish (not quite River Runs Through It style).  It may not have been the biggest fish on the trip, but I’m really happy I didn’t screw it up and was able to bring this fish to hand. 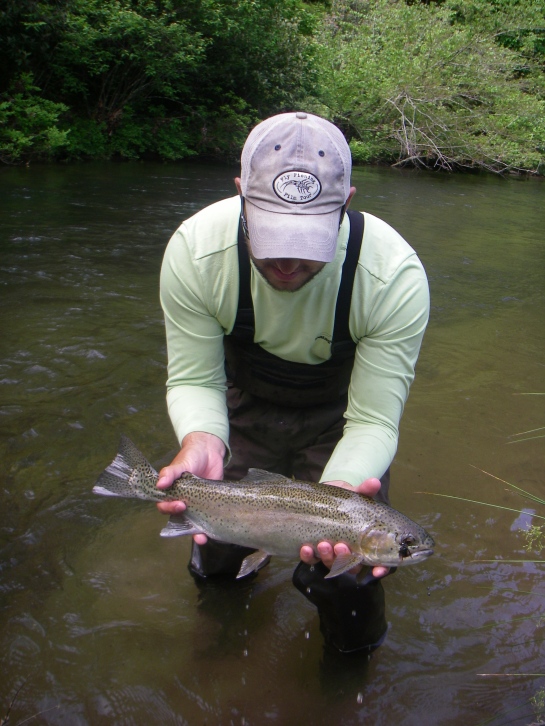 Then Blake got in on the action with a couple nice fish, the second one on actually came on the dry. Always a treat to watch a big trout rise and sip (or clobber) a big dry. 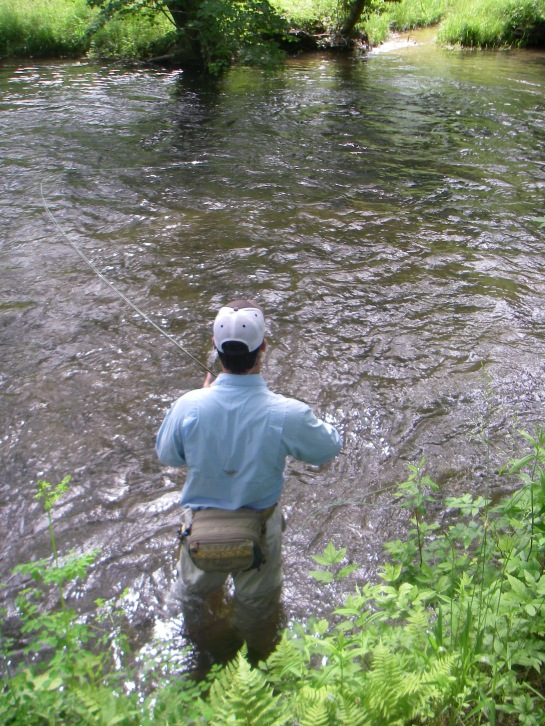 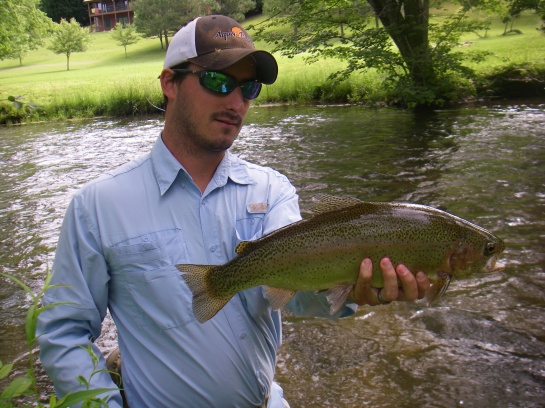 The day went on like this as we picked our spots and worked them over. The first (and only) snake encounter we had on the weekend was with a black rat snake that just wanted to be left alone. 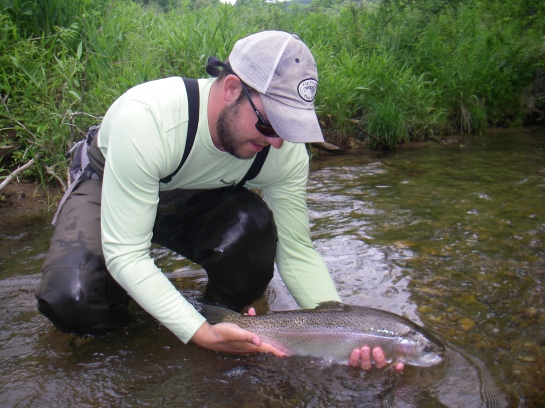 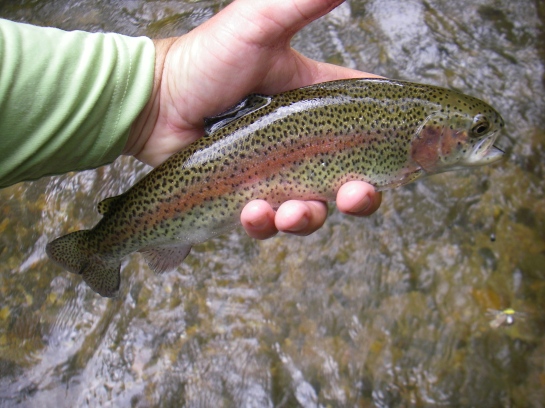 Later on I landed a brookie, a rare treat on this stream which gave me a slam on the day.

After that we grabbed a beer at the cabin then headed to the spot where we doubled on day one and I tried (and failed) to document with the GoPro. We approached the hole a little differently as the fish weren’t holding in the same spot. These fish were stacked up under some rhododendron so Blake stood on the bank and told me where my drift needed to go and after a short while I was rewarded with a good eat.

We let the spot settle down, then tried our luck drifting through again, this time a bit further downstream. It wasn’t long before I had another eat and this time it was a better fish. The fish ran sideways and after a very short fight my tippet gave way. What a heartbreak. We pushed further down, beating the bank with nymphs and streamers. Blake threw at a downed tree and I remember telling him that looked like a good spot. I threw at it and had a massive take, then as I laid into him to set the hook deep, I came up empty. My entire rig broke off above the dry! Not quite sure how it happened, there was a lot of structure down there, so it could have run me up into there, all I know is that this fish seemed larger than any other we caught all weekend, now maybe he’s sporting some lip jewelry. Another heartbreak, I really wasn’t in the mood to tie anything else on after that. Blake fished on and caught one last fish before we went back to the cabin. 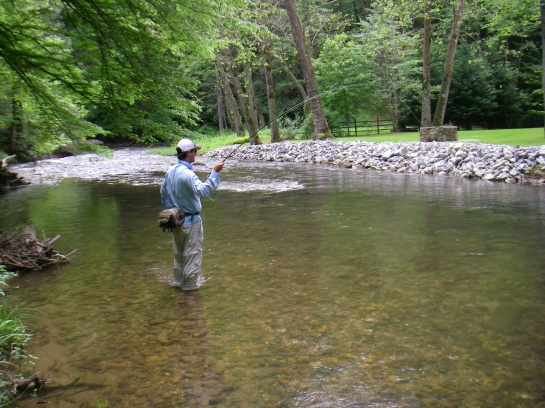 It really didn’t take much to convince me to rig up again and I was able to land one more before it got too dark to see.

We woke up a little bit earlier to fish before the long drive back to Louisiana. Not much doing for me on the day, but I did land a couple of fish of note – another brookie and a “trophy” bluehead chub. 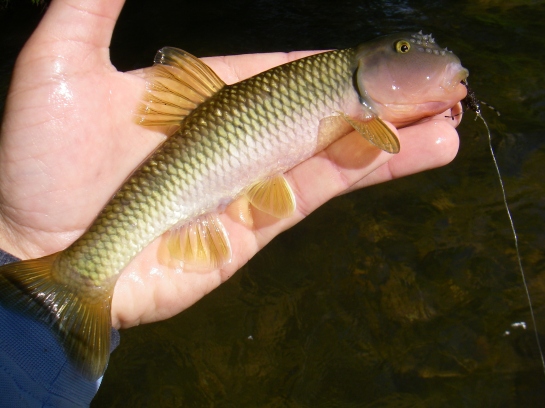 BBQ and Lazy Magnolia at The Shed in Ocean Springs put a nice touch on the end of the trip – I forgot how good this place was. Another successful trip to North Georgia for Memorial Day weekend in the books. It’s too bad we caught a year when my parents were out of town and the girls couldn’t make it, but that certainly freed us up to do a ton of fishing. It was a good year for it too because the creek at the cabin is fishing better now than I ever remember. Hopefully it fishes the same next time I head that way, not sure when that will be, but I always look forward to it.