Our last day of fishing in Wyoming was quite the encore.  We had yet to hike-in and fish anywhere the whole trip, but this would be the day to buck that trend.  We had the time and it looked like we might have the best weather of the trip that day.  We packed our daypacks and took off for “Shangri-La”.  After about a mile of walking uphill we were greeted with this site.

It was beautiful.  If I had the energy to just run straight down the hill to the creek I would have.  Once on the water it didn’t take Blake long to figure out a pattern.  Fish were crushing a nymph he had tied and after sharing one with me we were catching fish at a silly rate.  They were hitting on top too, but the sub-surface flies were killing it.  It wasn’t all cutthroat though, in fact, it was mostly whitefish. 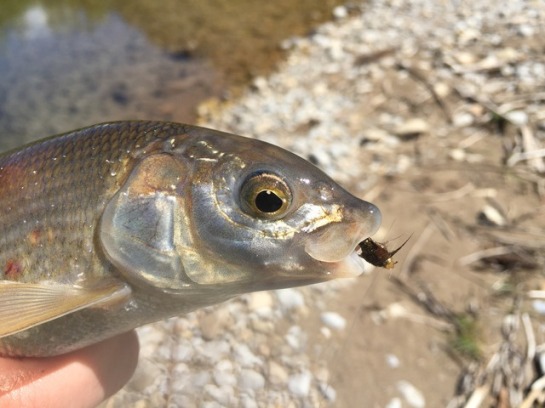 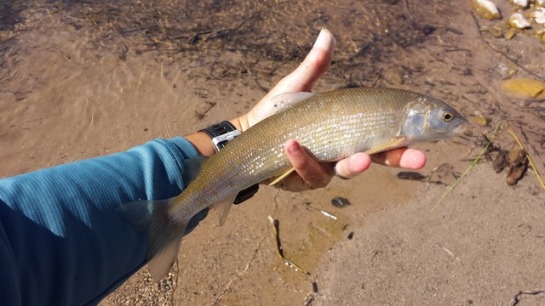 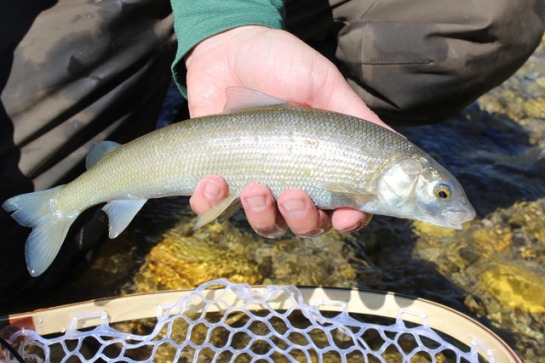 Cutthroat were the stars though and they were mixed in too.  Sometimes they would be the first fish to hit while drifting through a run or a pool, other times you had pick your way through the whiteys before landing a cutty. 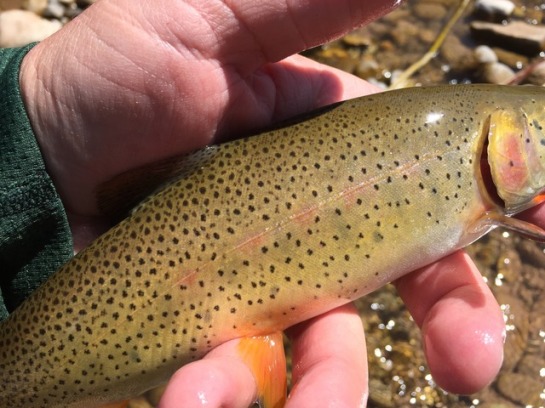 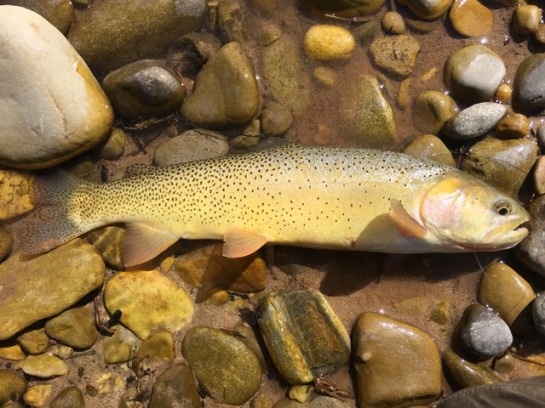 Some of the cutts were better than others.  I was able to upgrade my Snake River cutt pretty early on and had back to back good fish in one of the first few runs. 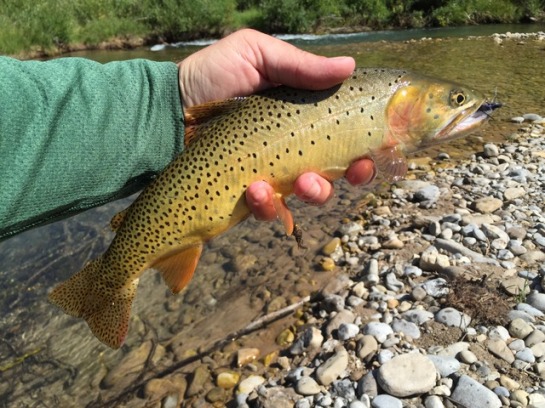 The fishing was incredible. 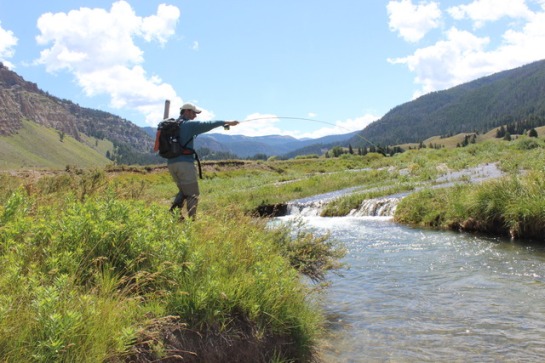 In a beautiful place. 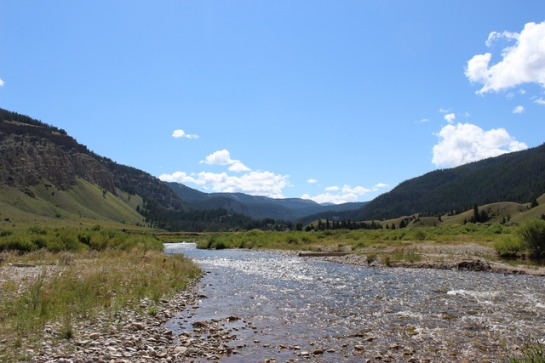 With lots of rod bends to go around. 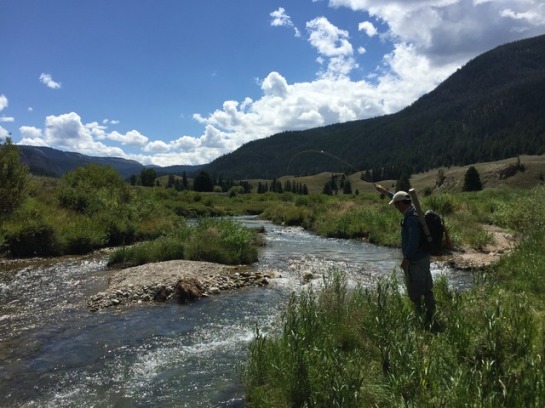 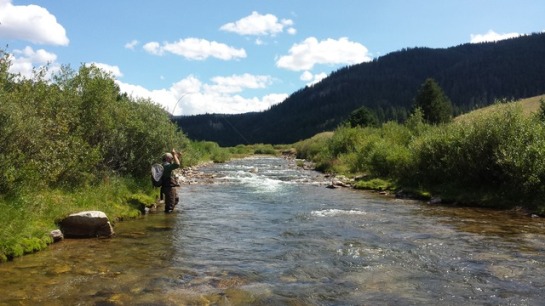 I reached a point where I thought – “Gee, how could this get any better?”

Then Blake catches a double and it just seems fitting.  And just for a bit of diversity he found a chunky brookie too.

But still the Snake River cutts were what we were there for, and we caught several nice ones. 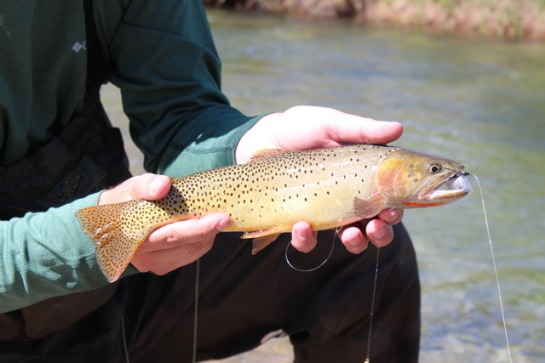 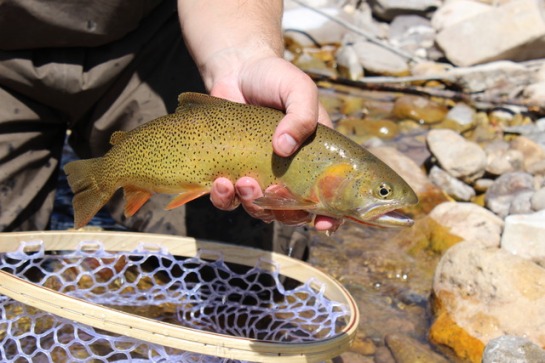 We didn’t catch everything that lived in the creek though.  I pulled the hook from a good fish early on, but Blake really missed a beast right at the end.  A monster fish, it definitely would have been big fish on the day and probably rivaled big fish on the trip.  No trip is complete without the “big one that got away” story and unfortunately that is how we ended our days worth of fishing and really the entire trip.  This place really had it all and it was hard to walk back to the car and not snap a few more pics.

You couldn’t wipe the smiles off our faces as we made our way into Jackson. 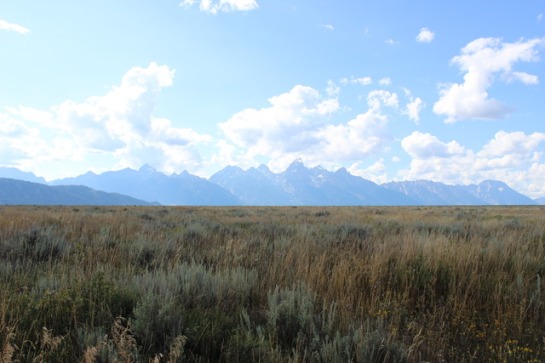 A stop at the Snake River Brewery for a flight and a burger was just what the doctor ordered after a long day of fishing.  After a bit of shopping for the kiddos and an obligatory elk arch pic we headed on down the road to our motel.  It was clean, cheap, 70’s chic and the shower and bed felt incredible.

Our flight out wasn’t until later the next afternoon so we headed down to SLC with time to spare and decided to check out the Utes digs.

This place looked tiny compared to 100,000+ Tiger Stadium.  A nice reminder that football(and tailgating) season is just around the corner.

One last local beer before getting on the plane to reflect on a really special trip.  A lot of planning went into this trip to make sure we gave ourselves the best opportunity at the slam and it felt great to accomplish it.  A big thanks goes to Steven Brutger over at Stalking the Seam for all his help.  I put what I thought was a good plan of attack together and sent it his way and with a few tweaks we were able to get it dialed in.  I don’t think there is anything I would have wanted to do differently.  From the fishing to the scenic drives to the craft beer – everything about Wyoming was amazing.  If I could make this a yearly trip I would – it was that incredible.  Hope y’all enjoyed it as much as we did, until next time.

The salmonids are in family Salmonidae, which has 10-11 genera that is divided into 3 subfamilies; Coregoninae(whitefish), Thymallinae(grayling), and Salmoninae(char/trout/salmon). Living in the Southeast you have access to a very limited amount of salmonids and I’ve caught the 3 that occur in Georgia.  The brook trout is the only native trout species in Georgia and it is actually a char.  Update, September 2022: I made my first trip out West in September of 2012 to Colorado and caught several “greenback” cutthroat trout in Rocky Mountain National Park – or what were considered greenback trout at the time.  Made another trip out West in August of 2013 to Teton and Yellowstone National Parks where I picked up another cutthroat species.  In August of 2015 I was able to complete the Wyoming Cutt Slam, picking up Wyoming’s four native cutthroat species (they do have a fifth, the Westslope, that is not required for the slam).  In July of 2017 I completed the Utah cutthroat slam, which didn’t necessarily add any new species to the list, but I was able to add Bonneville cutthroat outside of the Bear River drainage. In June of 2021 I made it out to Arizona and New Mexico to catch Apache and Gila trout in their native range. Finally in August of 2022 I made it up to Northern Idaho and caught several Westslope cutthroat in their native range.

Dr. Robert Behnke is the man when it comes to salmonid knowledge. Pick up his book if you want to learn more about this particular family, “Trout and Salmon of North America”. Another great resource is Gary Marston’s Native Trout Fly Fishing blog, he has a Trout and Salmon species page with pictures and information of all those that he has caught (which may be all that are found in the U.S.). Gary’s trip reports are a good read as well, he has had some epic road trips to catch trout in their native range.

Brook trout are the first native trout species I ever encountered as they do live in Georgia.

Brown trout are not native to North America.

The first trout species I ever caught, I’ve still yet to catch them in their native range.

At the time this fish was considered a greenback, but it’s more likely that it isn’t after genetic research determined that the true greenback was limited to only one stream, outside of it’s native range, in Colorado.  Work has been done to re-establish populations throughout it’s native range and hopefully I’ll have the opportunity to fish for a true greenback cutt.  Their historic range is pretty much in the state of Colorado on the Front Range, with some watersheds slipping into Wyoming. They are found in the headwaters streams of the South Platte and Arkansas River drainages.

Their historic range is headwaters streams in the Green and Colorado Rivers, as far south as the San Juan River, west of the Continental Divide.  They are currently limited to a few small headwater streams of the Green and upper Colorado rivers in Colorado, Utah, and Wyoming, including the Escalante River drainage in southern Utah.

Their historic range is pretty much in the state of Utah, with some watersheds slipping into Wyoming, Idaho, and Nevada.

They are found in the headwaters streams of the Bear River.  No range map was given from NatureServe or the USGS for the Bear River cutthroat trout, but they are native to the Bear River and it’s tributaries, including Bear Lake.

Their historic range overlaps the Yellowstone cutt in the states of Wyoming and Idaho. They are found in the headwaters streams of the Snake River, particularly the South Fork.