In late April I checked on the fish down in the Maurepas Swamp. I was hoping to run into some sacalait or maybe a choupique on the fly. I think I was a bit late in the year for any sacalait action and unfortunately I didn’t come across any choupique either, but I had decent action on the local sunfish. It wasn’t as hot as the last time I was down there, but I was happy to have fished it this year while the irises were in bloom and prior to Hurricane Ida’s arrival.

It was a nice little mixed bag, which tends to happen in the swamp, and a nice day on the water before a front rolled through. That’s what forced me off the water, the rain moved in and it stormed a good bit as I was loading the kayak.

I don’t get out much to fish anymore, but I found some time Sunday to do just that.  I loaded everything up late Saturday with plans to make the long drive to catch some redfish the next morning.  When I woke up and checked the weather it was evident that inshore fishing wasn’t an option.  The entire Gulf was covered in rain.  Everything inland looked alright though, at least for the time being, so I had to come up with plan B fast.  I decided to head down the road a bit and check out a lake in the Maurepas swamp that I’d heard good things about.  I had no idea how much time I’d have before rain chased me off or if I’d even have any success, but I had to get out. 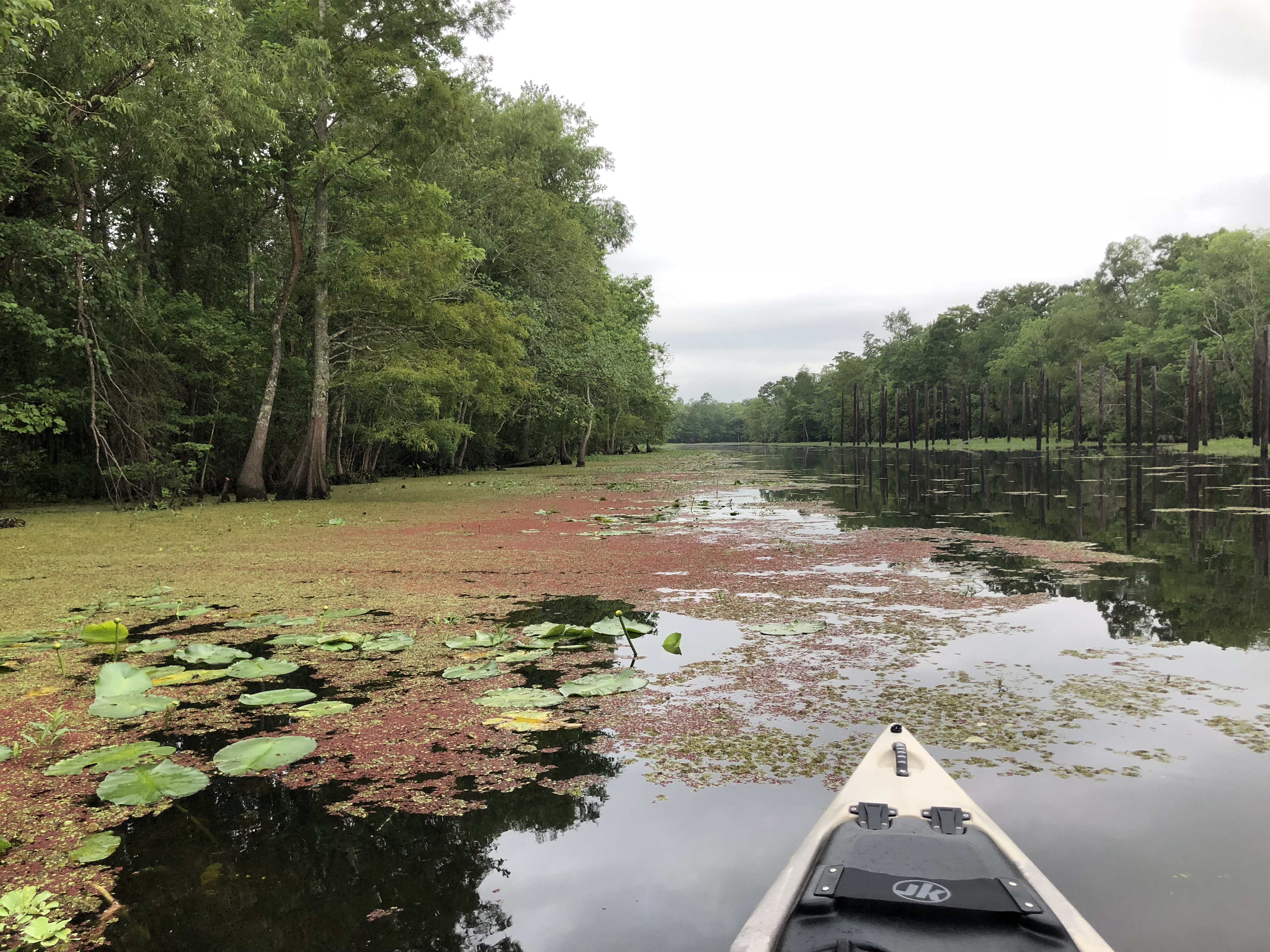 I arrived at the launch shortly after sunrise and was out on the water as fast as I could possibly load my boat.  I was happy to see the black water was fairly clean and the lake seemed to have a healthy amount of submerged vegetation.  I didn’t use the flex drive of the Cruise FD much today because of the grass and I couldn’t help but think on trips like this how much I missed the Kilroy.  I started out throwing a hollow body weedless topwater frog and was treated to a couple of quick hits from largemouth bass.  I connected on my second one and hoped that the trend would continue. 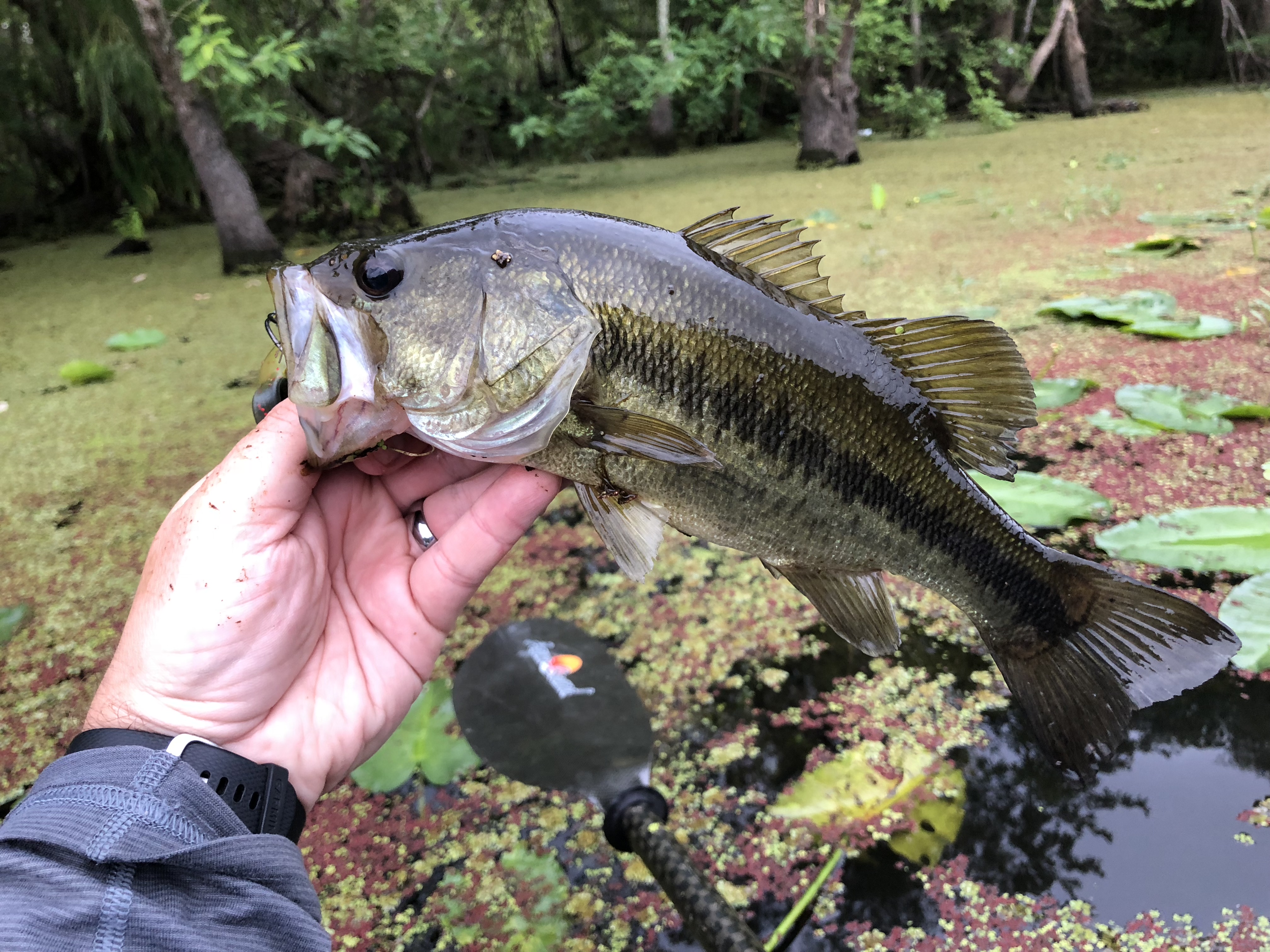 As I worked the shoreline and nearshore grass I had a few more slashing hits on the frog that were more likely from gar than bass.  In time I came to a spot where the lake narrowed and a couple tributaries dumped in.  It was a beautiful spot with an obviously healthy swamp.  The water was visibly moving in the bayous as it drained into the lake. 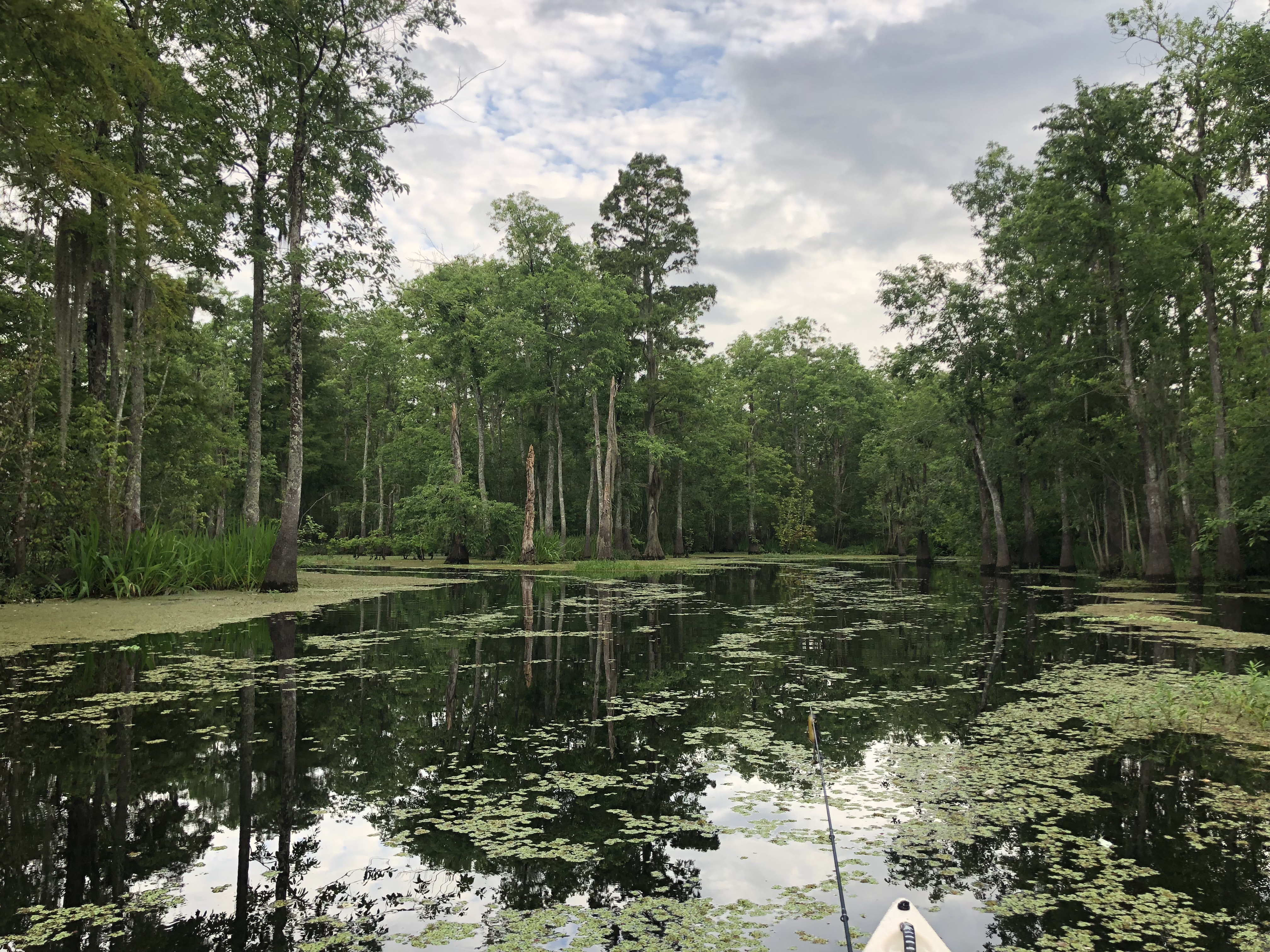 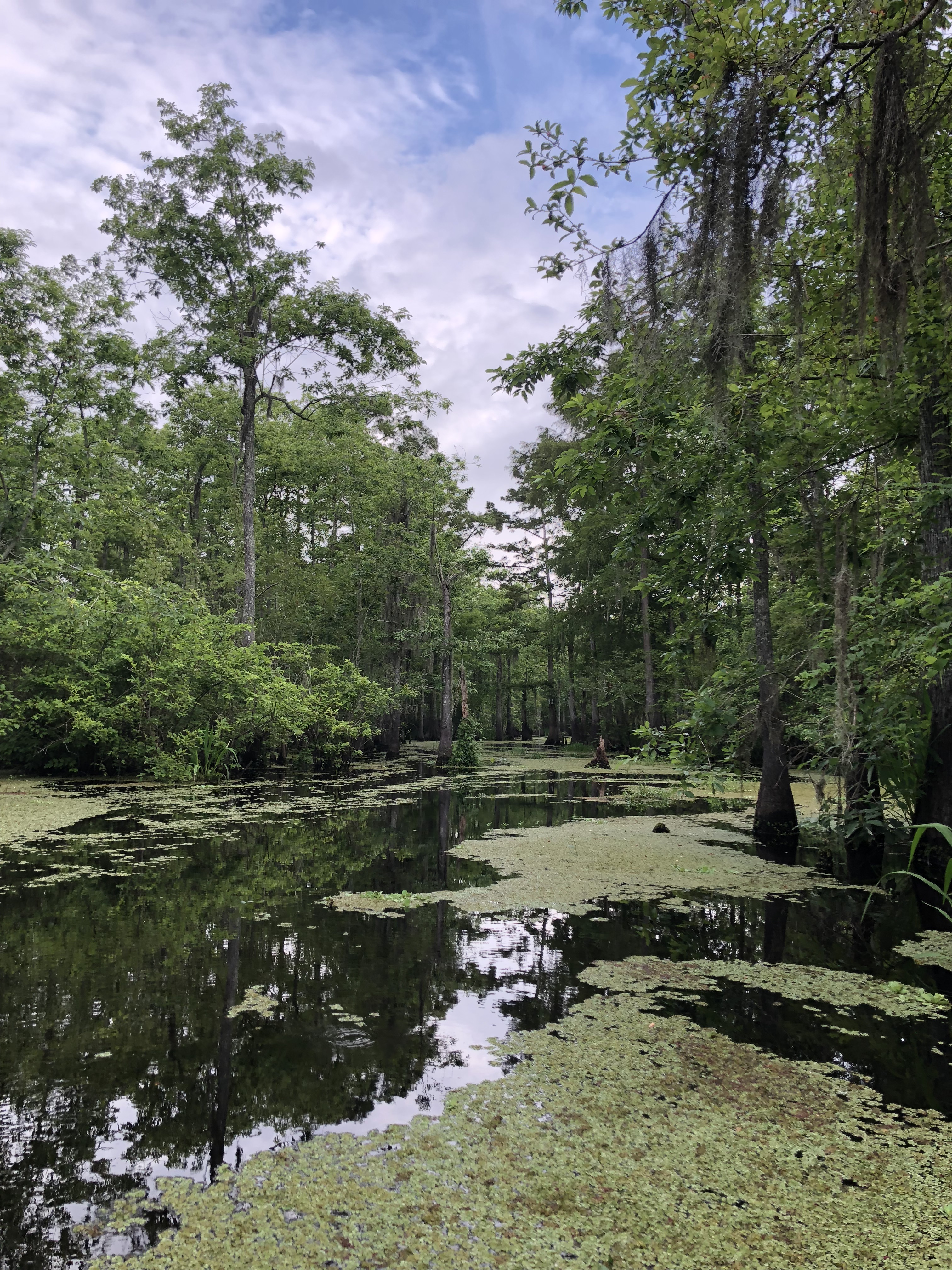 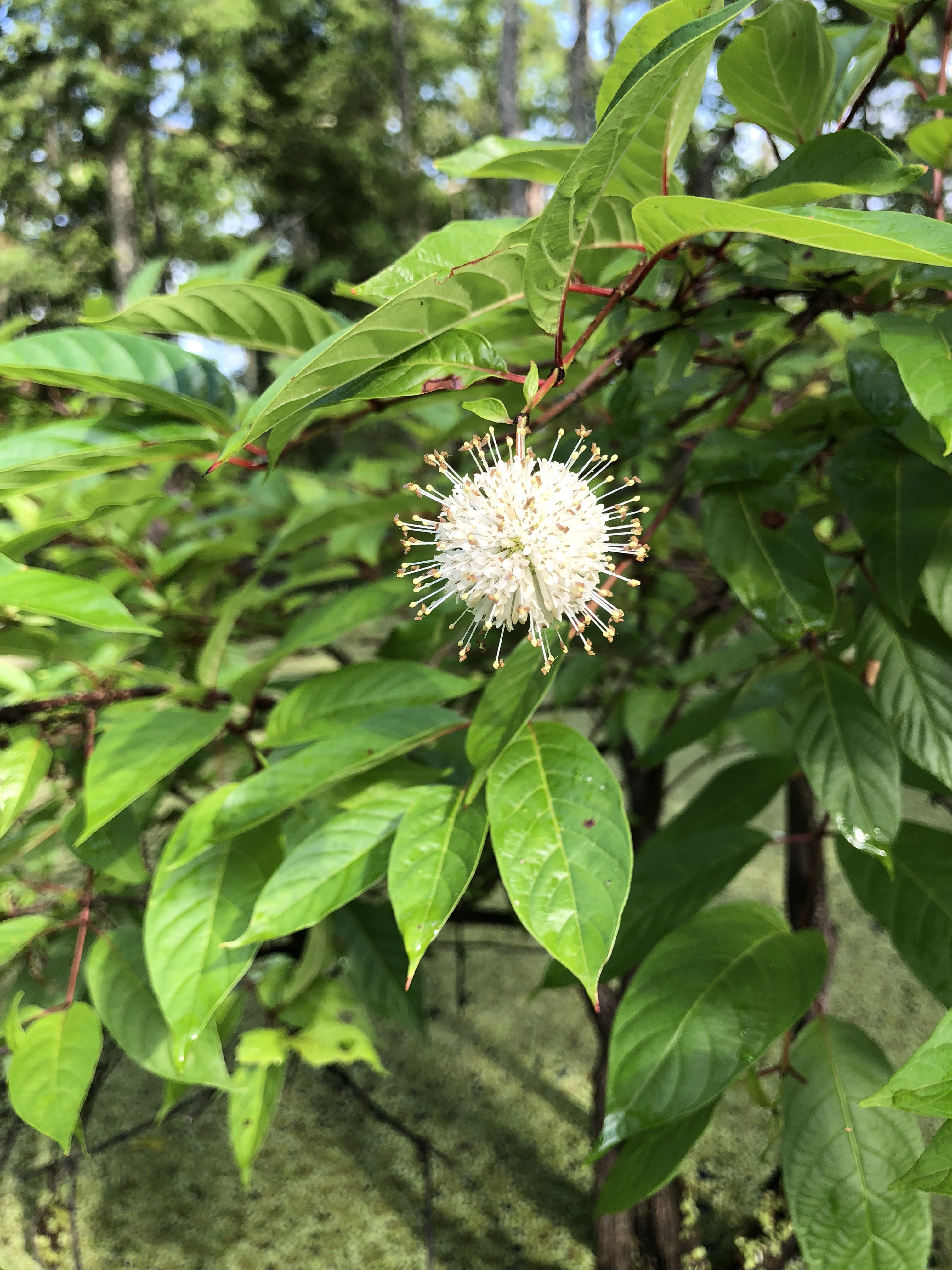 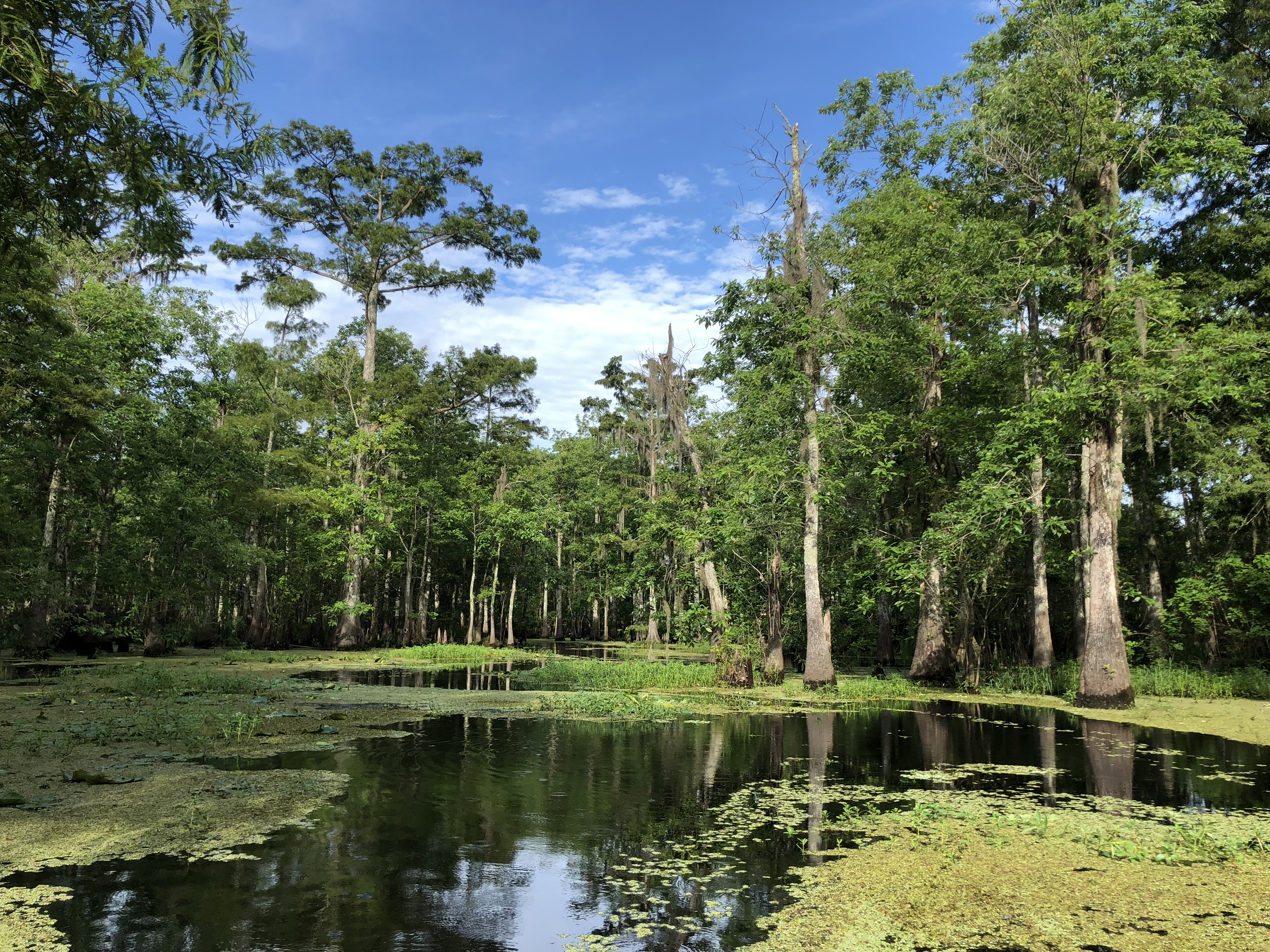 I rounded a bend in the bayou and heard a tremendous toilet bowl flush that made the hair on my neck stand up with excitement.  After scanning the area I was able to pinpoint the location of the activity and made a cast with the frog beyond the spot so I could run it through the area.  On my second cast I got an eat and as soon I was hooked up the fish took to the air and I could see that I had a choupique on the line.  After a nice fight and the fish getting caught in a wad of grass I was able to boat the dinosaur.  A lot of people call these things trash fish, but you know what they say about one man’s trash?  If I’m catch and release fishing I’ll take a fight from a choupique all day long. 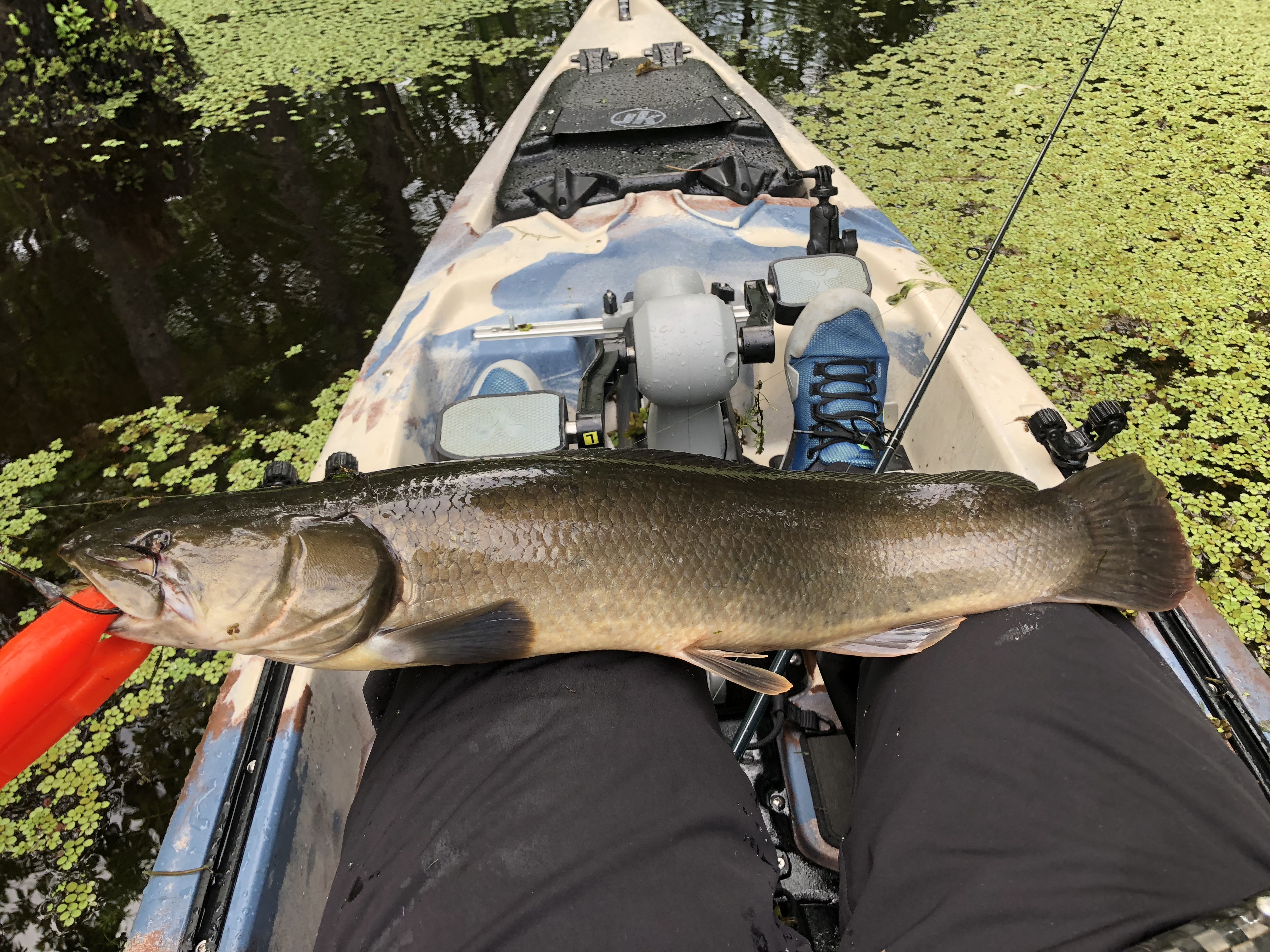 After the battle with the choupique, and replacing my frog, I headed back toward the lake and continued fishing topwater.  The bite began to wane so I switched things up and went to the fly rod.  I began working a popper-dropper around the trees and stumps that weren’t covered up in duckweed and soon began catching fish again.  The stumpknocker were active that morning and repeatedly hit an electric blue Boogle bug that they couldn’t possibly fit in their mouth.  Every once in a while they’d see the dropper and I’d be quick enough to set the hook. 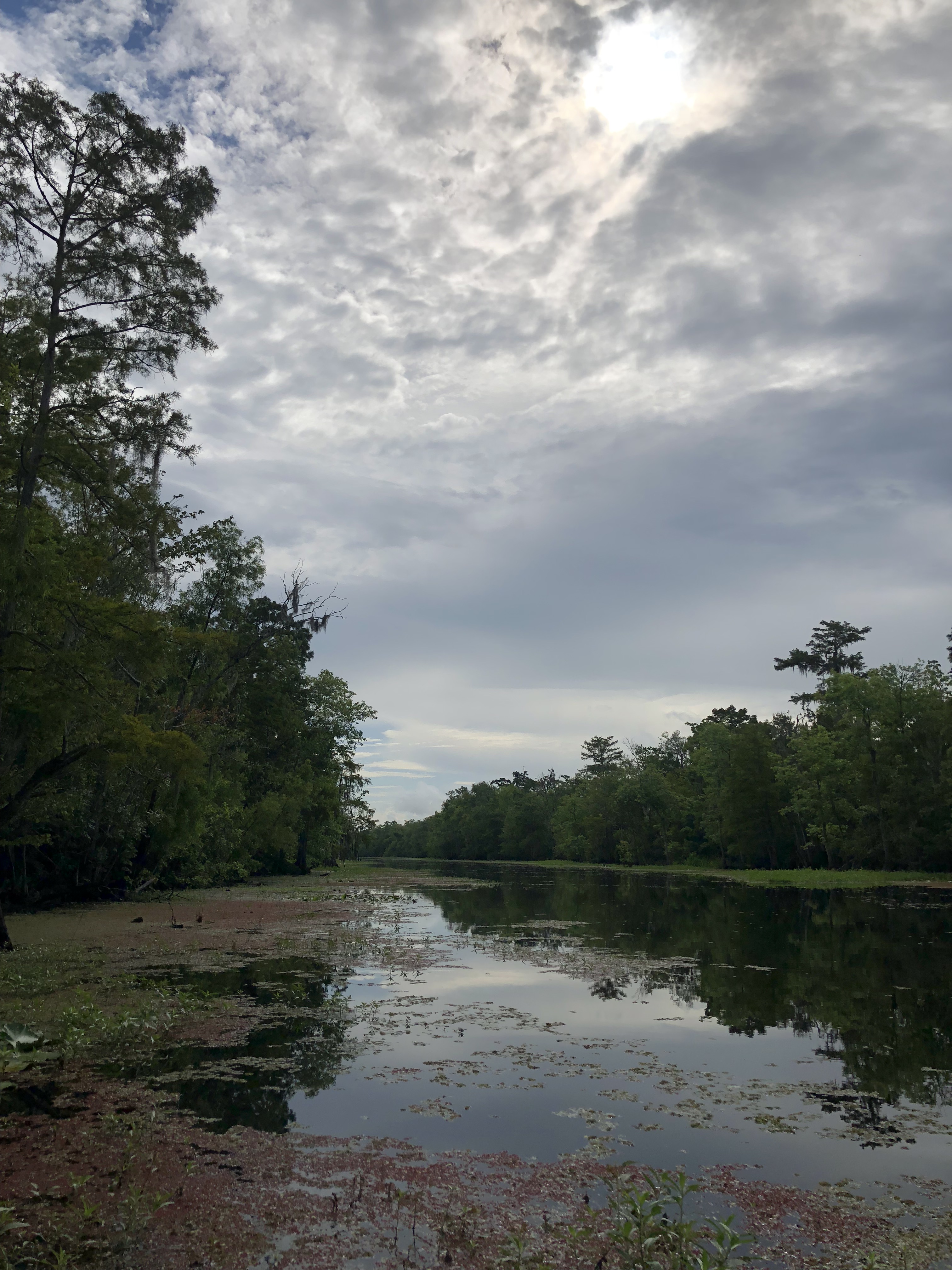 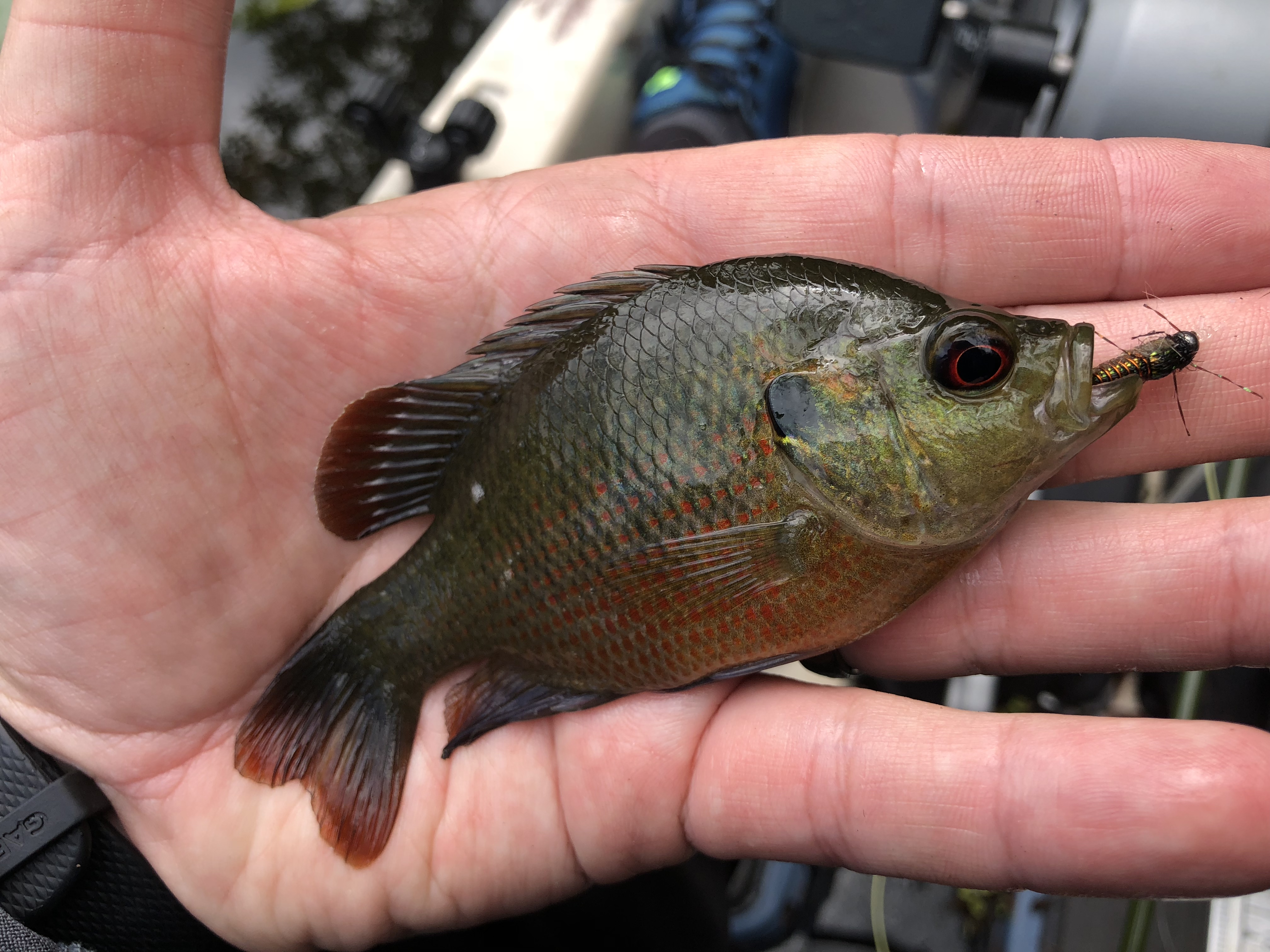 I continued fishing the fly rod and had a couple surprises.  The first one was a fish that I thought was going to be a big bull bluegill on hookset.  The popper slowly began to sink so I gave a little hookset and then I felt a lot more resistance than normal and the popper began going sideways.  After a nice fight with my glass 4wt double over at times I landed a bass – and a wad of grass. 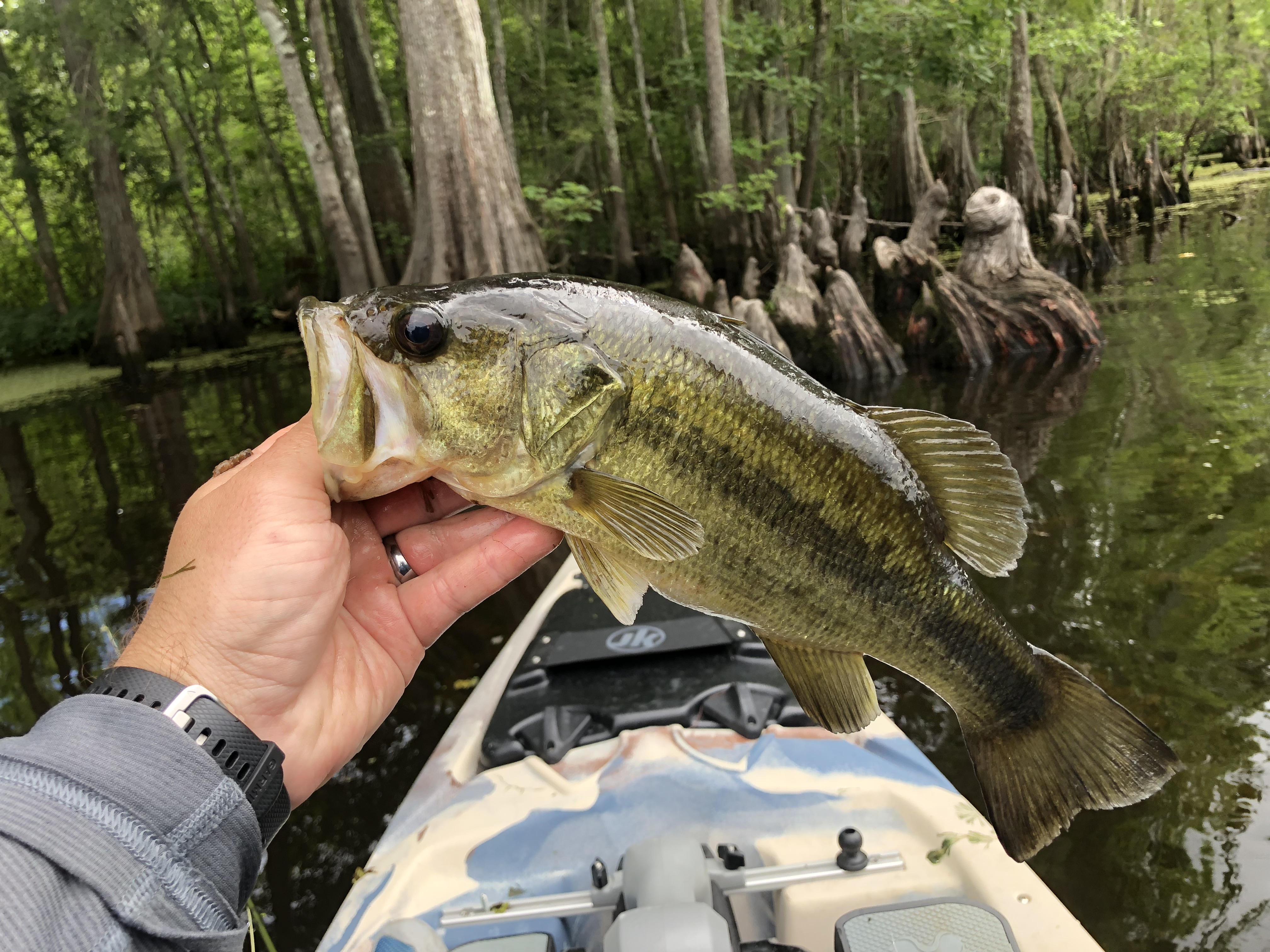 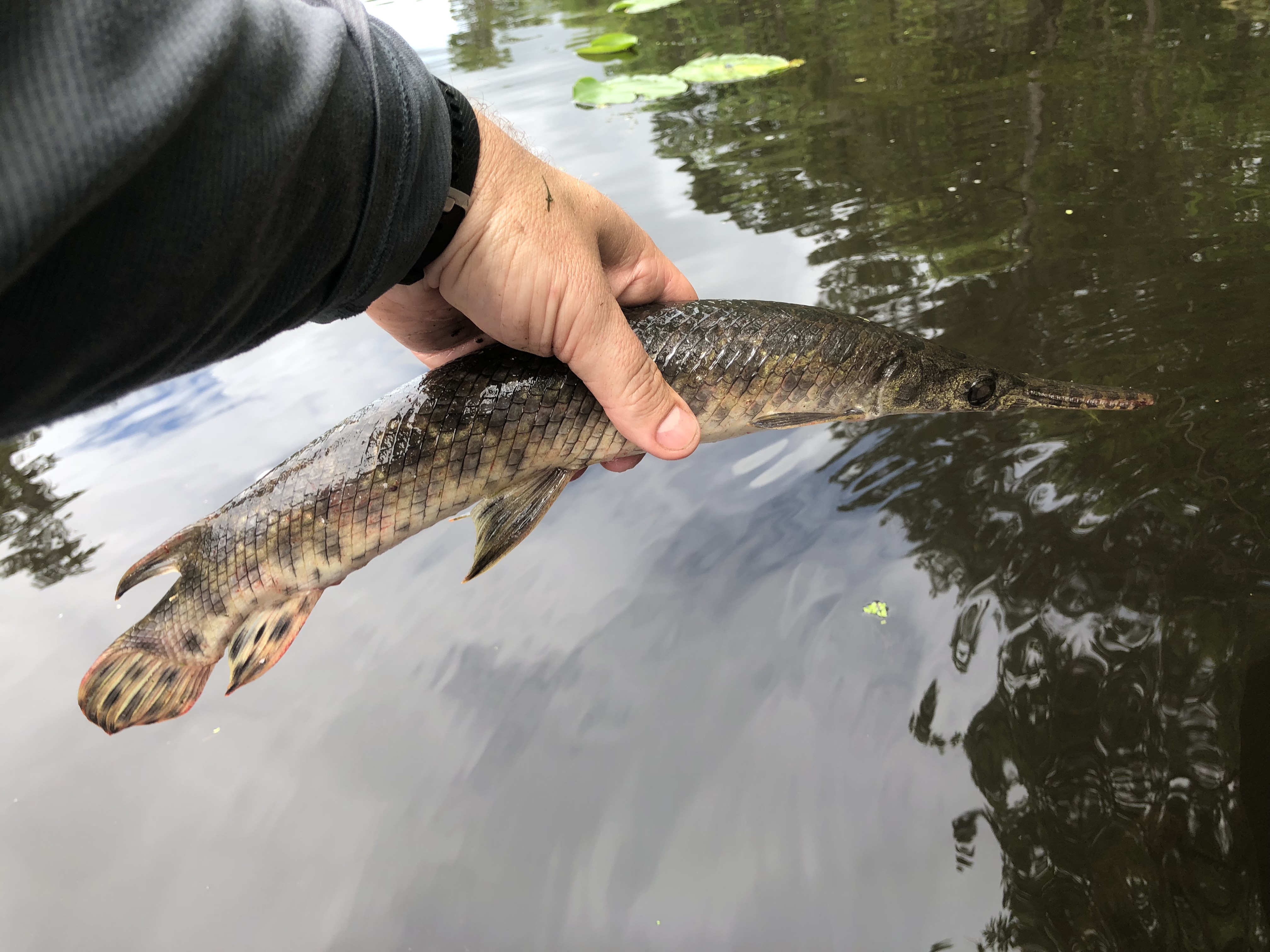 The second was a spotted gar that came after the popper and when I set the hook on the eat my popper came out and my dropper tagged him under the chin.  Not the conventional way to catch them on the fly, but it sure was easier to handle than a rope fly. 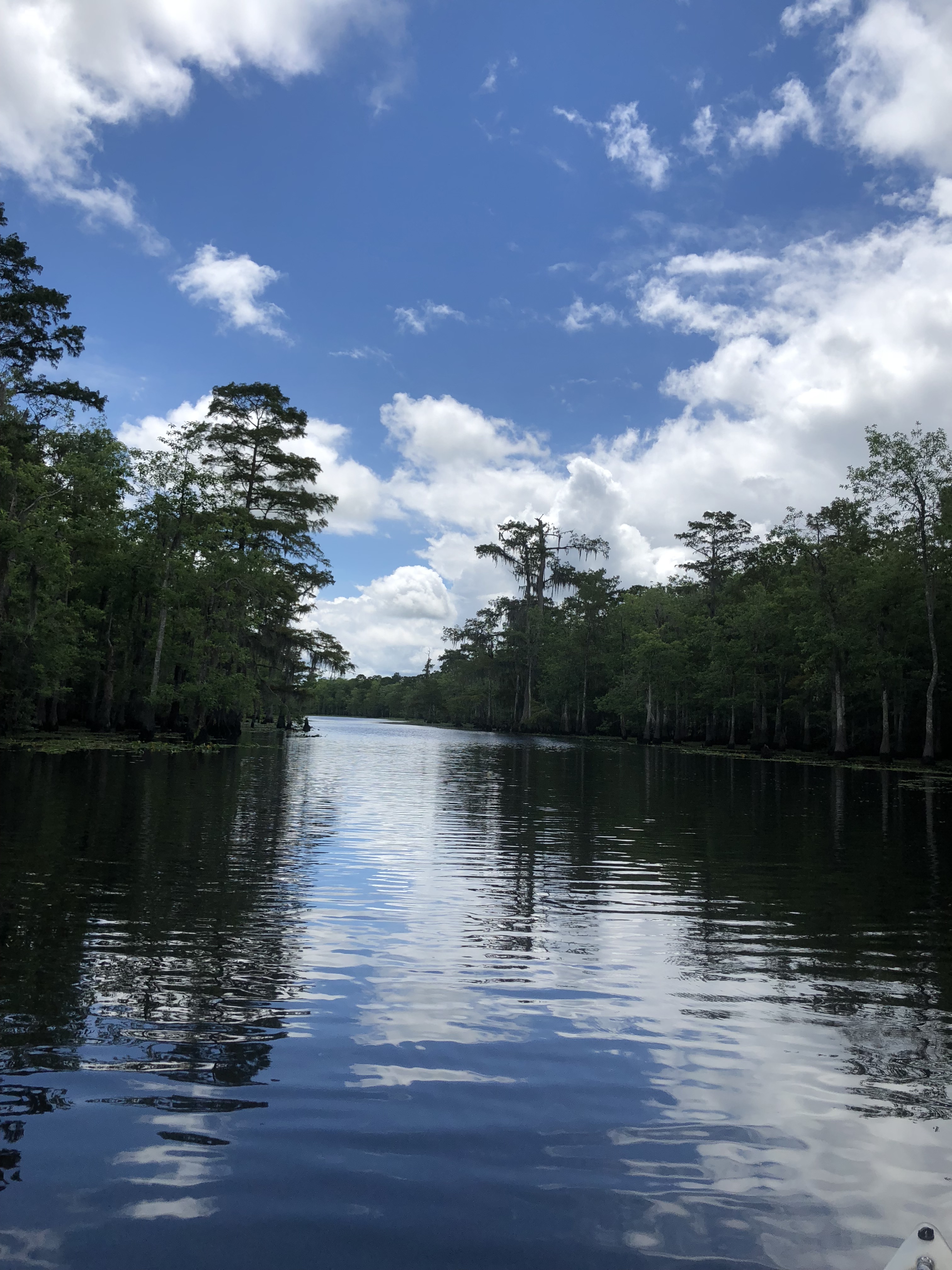 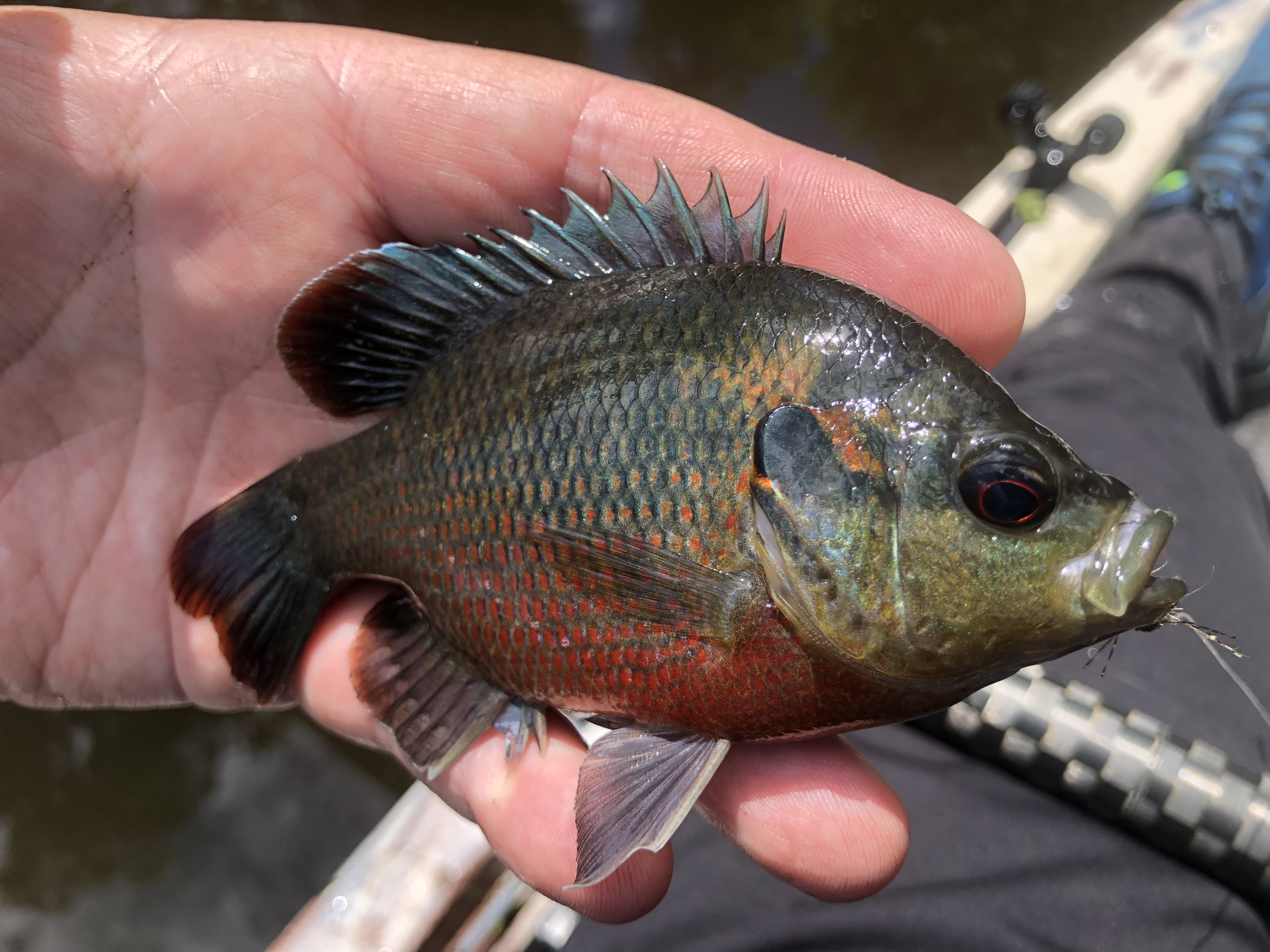 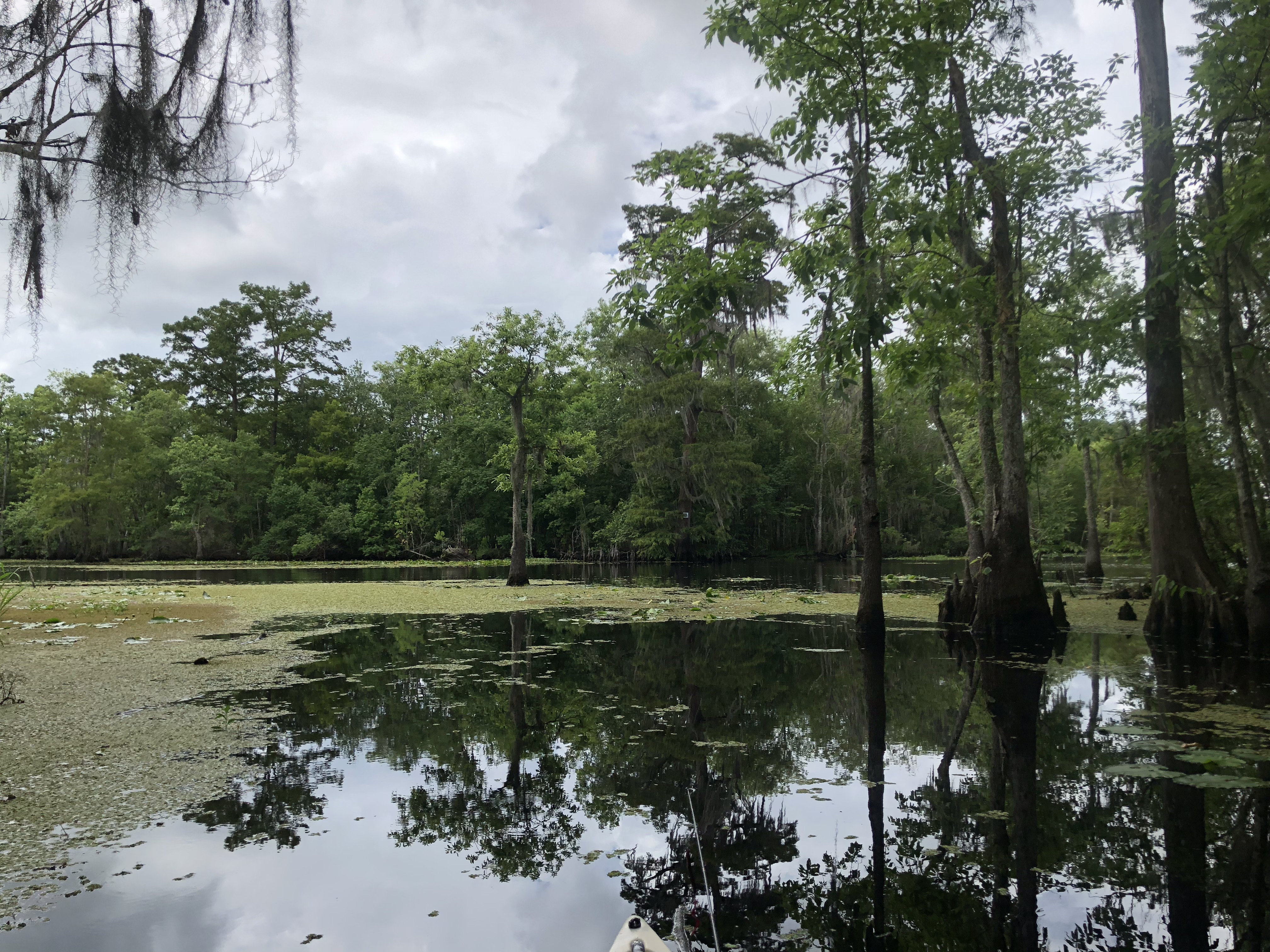 I continued to fish the fly rod and explore the bayous that drained into the lake.  I caught a few more stumpknocker before the rain began to fall.  It was a little after noon when it began to fall hard enough that I decided enough was enough and pedaled my way back to the launch.  For being a last minute backup option the Maurepas swamp sure was a good one.  It was a beautiful place to explore and home to a good variety of hungry fish – I’m sure I’ll be back.

Steve and I set out last Saturday in search of Largemouth bass with a penchant for topwater frogs. We’d heard from a friend that a certain swamp to the west of town held good numbers of them and was the perfect place to try our luck. So we ignored the urge to head to the marsh and went bass fishing in the swamp instead.

It was a beautiful day, winds were fairly light, and temps hovered in the low 90s, which also meant the mosquitos were out in force. We set out around sunrise and when we reached our destination we were greeted with some super fishy looking water, which always gets the adrenaline going. Steve didn’t waste any time getting onto the water. As always, I was a little slower. 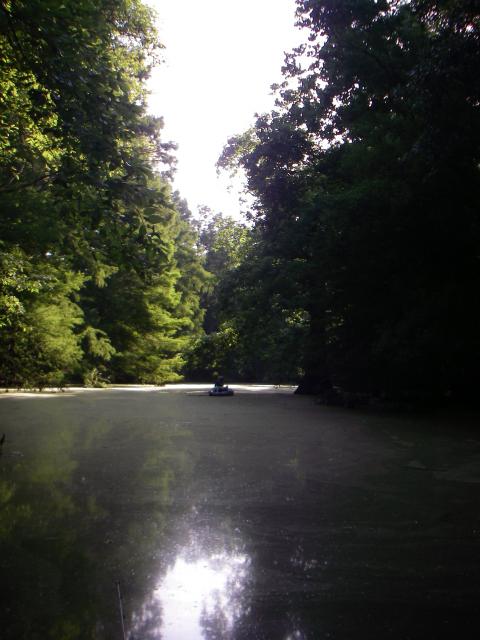 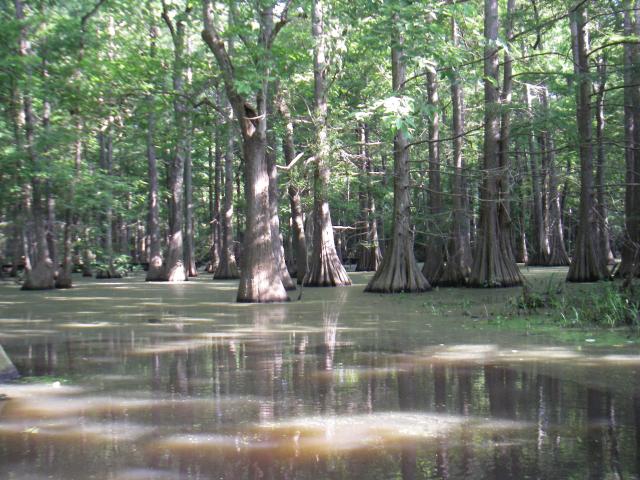 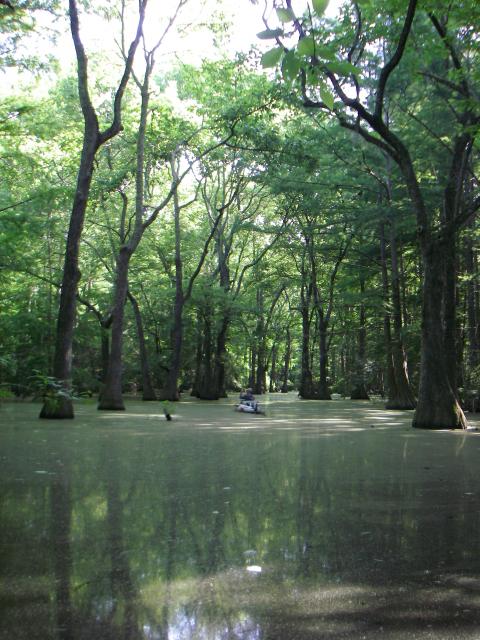 I’m almost ashamed to admit, especially living in Louisiana, but I can’t remember the last time I fished water like this. Despite being surrounded by them, I generally avoid still, swampy waters like this because they are tough to see through and there’s no telling what the oxygen levels are like. However, I was pleasantly surprised to see excellent water clarity, that is, under the duckweed. Of course the duckweed covered most of the surface like a bright green blanket – which is why we would be frog fishing.

Steve got on the board early on with an 18.5″ LMB on a frog and I followed up with a 24″ choupique on a texas rigged soft plastic, which proved to be the only fish I’d land on the day. 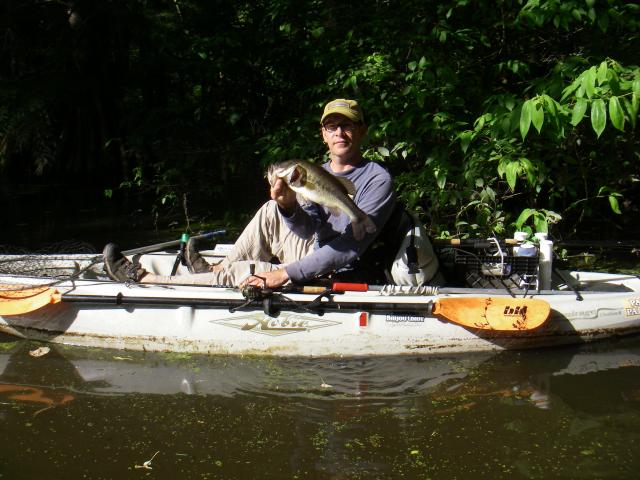 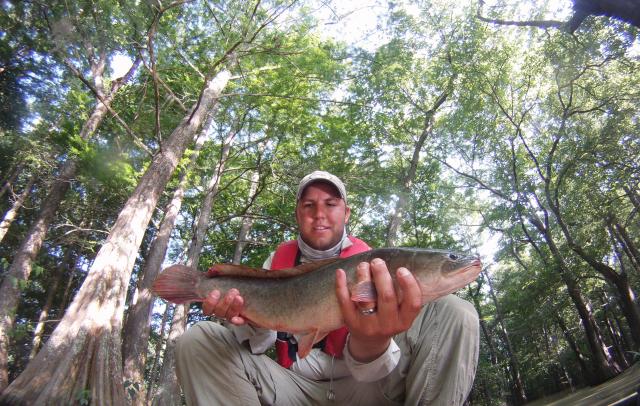 I threw the soft plastic in places where the duckweed was more broken up, however where it was thick, the frog was our best bet, in fact it was the only bait that even elicited a strike from a LMB. Steve had better luck than I did throwing the frog and ended up landing a few, all around 18″ if I’m not mistaken. I came up short on the hook set on every fish that hit. Being new to frog fishing, I was under powered and over anxious, throwing medium tackle with light braid and setting the hook way too early. Still it was a lot of fun to watch the toilet bowl flush and feel a taught line, even if it was just for a few seconds. 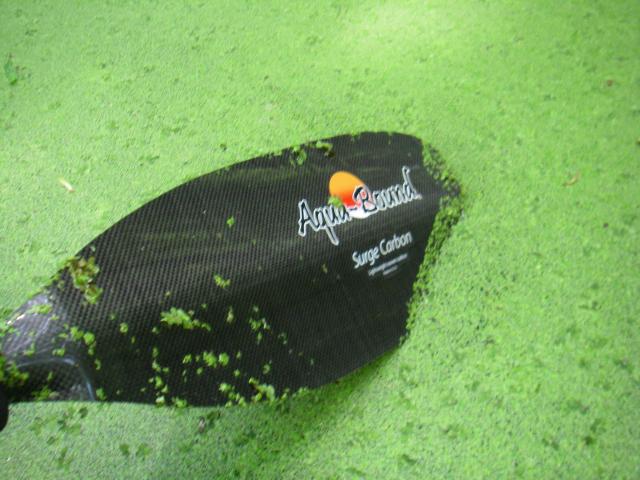 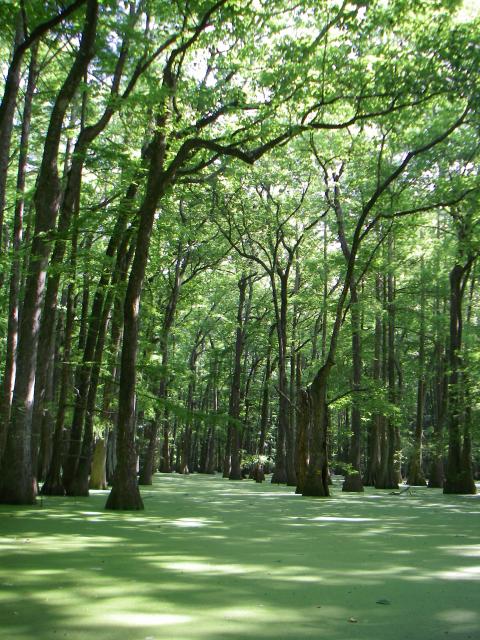 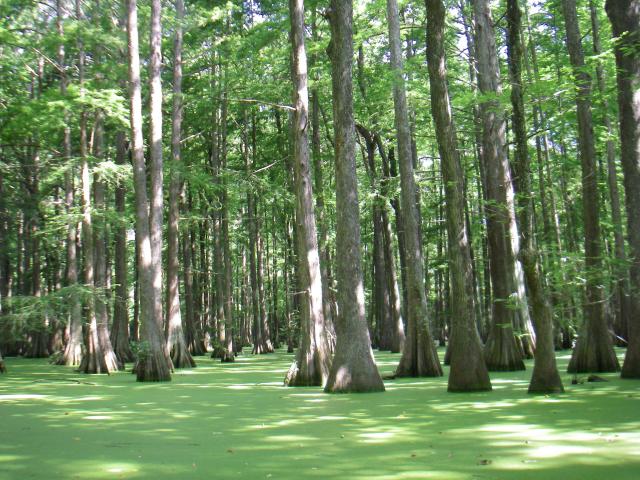 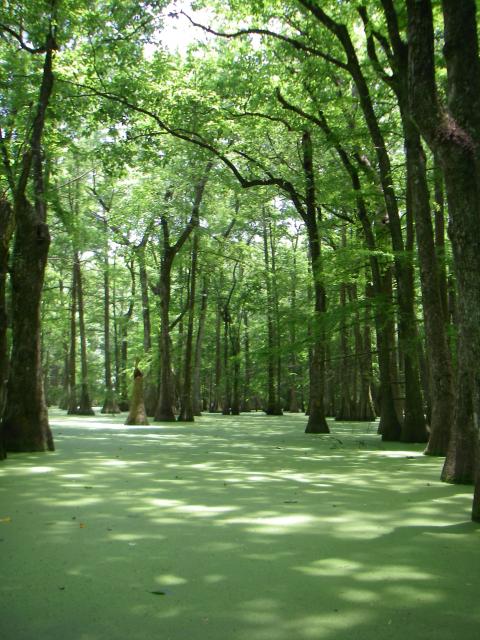 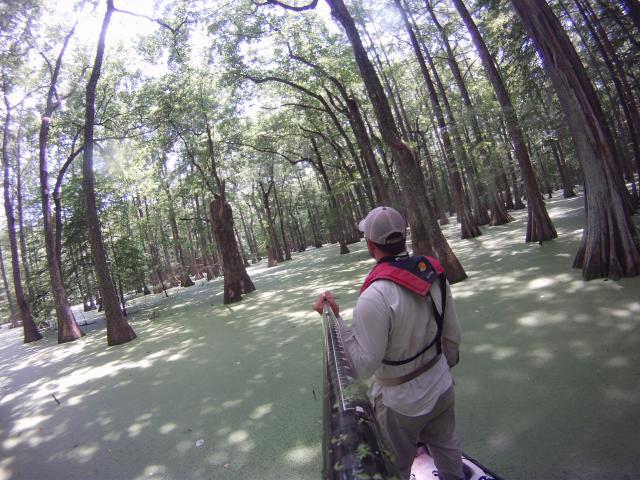 Each of us did have our exciting moments though. I hooked and fought a nice 18-20″ bass for a short while, only to lose him right next to the boat, in mid air – it had my heart racing. Steve, however, lost a true beast.

We were fishing parallel to each other, with some distance in between. I was on the opposite side of where he was working his frog when I heard a huge blow up. I looked over and all I see is a giant tail and a portion of his body breach the surface as the fish leaped from the water, Steve’s line went loose during the acrobatics. It was a very large bass, one of the biggest I’ve seen in public water, “dangs” and “dagnabbits” were definitely uttered.

Fishing the swamp really opened my eyes to the opportunities I often overlook. It was tough fishing and even though I only landed one fish it was still rewarding. Above average bass are certainly there. Next time I head that way I’ll be better equipped and hopefully my stories won’t be about the one that got away. 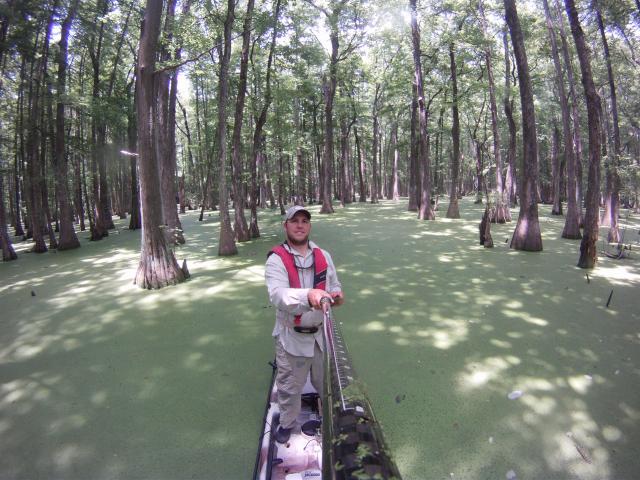 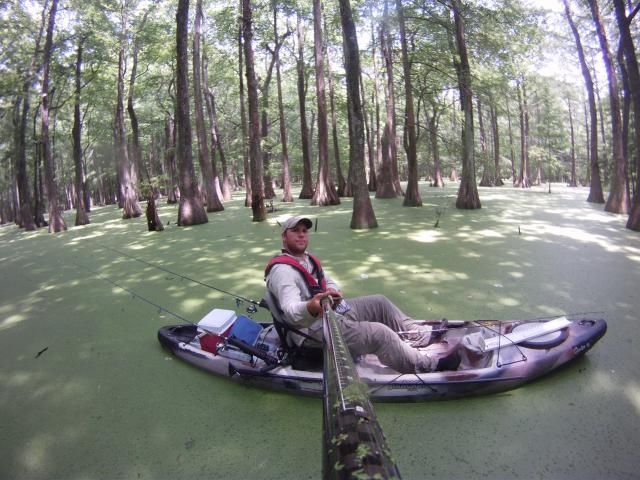