The first three days of our Georgia trip were devoted to bass fishing.  We were able to wrap up our redeye bass slam and as a bonus I was able to get the Georgia bass slam as well.  Now that we had made it to the cabin it was time to switch gears and target trout.

We hit the creek at the cabin early Saturday morning.  I had two rods rigged up; one with a big honking streamer that Blake tied for me and another with my standard hopper-dropper rig.

I had a follow on the streamer in the first spot I fished, which had me excited, but then things were quiet as I fished subsequent spots.  Blake had an eat from a big fish, but it spit the hook early on in the fight.  It was beginning to look like we might skunk at the cabin that morning, but I finally made it to a spot I could effectively fish and I had another fish follow and even an attempted eat, but I pulled the fly out of his mouth.  I stuck with it though and luckily got another good eat and I stuck him with a strip set this time.

Not the biggest rainbow we’ve caught at the cabin, but it was cool to get one on the big ass streamer.  I released that fish and went back to work and just downstream of my first eat I got another one.  This one was a little better fish.

Getting to watch fish chase down and eat a big streamer was very cool, but it was obvious that throwing one was not a great way to fish every spot on the creek.  Hell you couldn’t fish every spot with one because there really wasn’t enough room for it in most places.  For the 3 or 4 spots though where it seems like it will be effective I’ll make to sure to have a streamer tied up every time I fish them from now on.  We headed up for lunch shortly after that and then hatched a plan to fish some wild water that afternoon.  Blake had brought a 1wt on the trip that needed to be fished.

After lunch we headed up the road to what has become our favorite small stream in North Georgia.  We were looking forward to some wild trout on dry flies as we had not had much topwater action this trip.  After a short hike into the stream, we dropped down off the trail and toward the bottom of the valley into the creek.  It was a little disturbing to see as much hog sign as we did on the walk down, but what are you gonna do, feral hog are everywhere now.  I let Blake fish the first good looking pool so I could tie on a nymph dropper and he took advantage of the opportunity and hooked a nice wild rainbow. 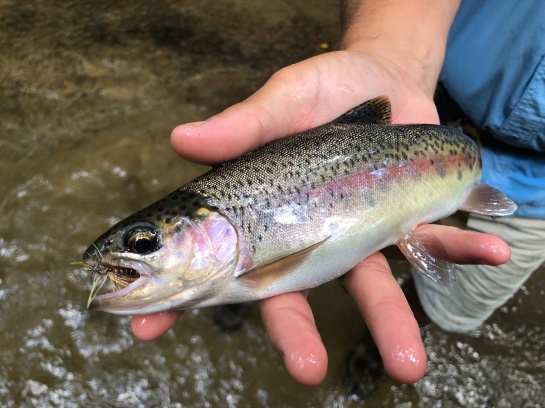 It’s not often you get into wild trout over 10″ on North Georgia small streams, so this fish was pretty special.  We continued working our way upstream catching tiny rainbows in pocket water and nicer fish in the plunge pools and deeper runs. 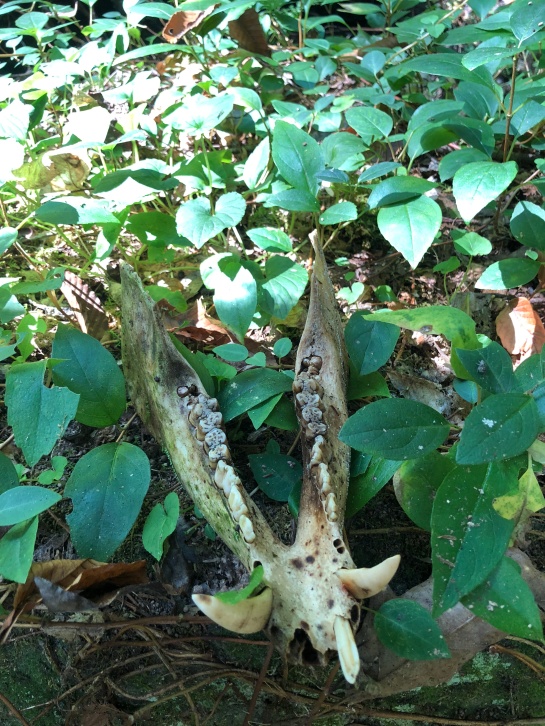 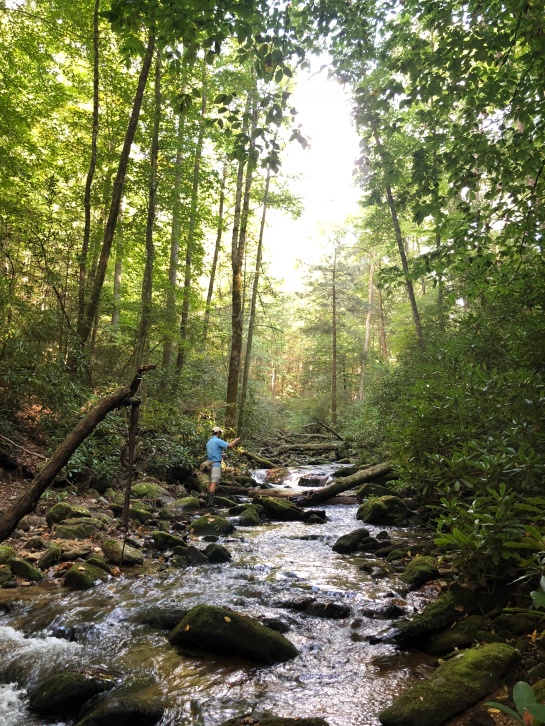 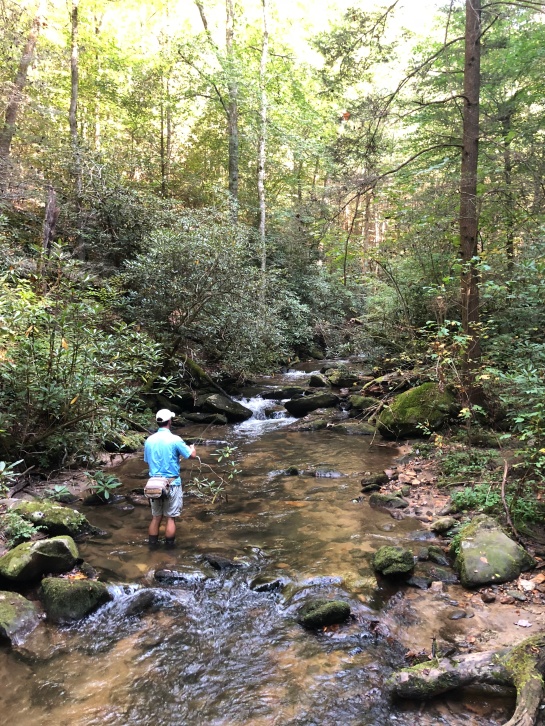 I hooked a fish in one pool that gave me a heck of a fight on the glass 3wt.  I was standing on the downstream side of a debris filled logjam fishing the pool upstream of it when the fish came up and hit the dry toward the back of the pool.  He ran all over the pool and under the logjam.  Thankfully I was able to keep the line tight and he wasn’t able to shake the fly.  I was able to pull him out of the logjam and back into the pool to land him.

It was a heck of a wild rainbow that pushed 12″.  One of the best blueline rainbows I’ve caught in a long time.  We fished for a little while longer hoping that maybe a rogue brown trout would show up.

No browns showed up, but it was a heck of a trip for 8-12″ rainbows.  The fish looked fat and happy too, which was nice to see because there are other concerning things happening in the valley.  At one point while we fished we saw a small pack of hogs which confirmed the hog sign we had seen.  We saw them again on the hike out.  It’s kind of a bummer they’ve discovered this valley.  Besides the hogs the hemlocks are continuing to die off due to the hemlock woolly adelgid and there is not much we can do to prevent that as treatment involves treating individual trees.  My hope is that other canopy trees will fill in for the dead hemlocks and continue to provide the shade these trout need.

We headed back to the cabin to catch the Tiger game.  We left Sunday before dawn as it’s a long drive back to Louisiana.  We had a heck of a time fishing in Georgia.  This was the most diverse fishing trip we’ve ever done in Georgia and it was awesome.  I plan to make more of an effort to fish different bass water from the cabin.  Coosa redeye, shoal bass, and smallmouth bass are all fairly close.

I want to extend a big thanks to all the folks who helped us as we completed the redeye bass slam.  I came up with a plan of attack for the slam, but then bounced it off as many people who were willing to listen.  If you listened, thank you.  Thanks to Matthew Lewis, who wrote the book on redeye bass fly fishing.  His passion for the fish is infectious.  He was the inspiration for me to tackle the slam.  He completed it last year and when he and a couple buddies put a formal slam together this year I knew I had to give it a go.  I’m glad Blake was along for the ride.  Thanks to Andrew Taylor, a Georgia boy in Oklahoma, who was very influential in helping us decide where we needed to target these fish.  He has done some really great research on bass in Georgia.  Thanks to Jon Hummel, fellow Jackson teammate, he completed the Georgia bass slam last year and gave some great suggestions on where we could target fish in North Georgia.  We ended up spending most of our time further south, but his help was not in vain – I did get my shoal bass!  Thanks to Chris Lynch, Mark Miller, Josh Tidwell, James Eubank, and Josh Rhodes, these Alabama guys were more than willing to help point us in the right direction as we fished our way across their state.