Got out in the kayak this past weekend with Blake.  In the days leading up to the trip the forecast just kept getting better and better, which led to a somewhat inflated level of confidence for someone who hasn’t been out in the kayak since before Thanksgiving.  The weather was spectacular, but the fishing was pretty tough.  We weren’t fishing the Minimalist Challenge, but I’ve heard similar things from the competitors.  I have to attribute that to the cold front that moved through just a couple days prior because those fish were not on the flats in the morning like they should have been.  Even when we saw fish early on they were extremely spooky.  Eventually things warmed up and I was able to land a few fish on the fly, including a nearly 20″, 5 lb sheepshead and  a 32″ junior bull red.  Tough day, but a good trip nonetheless. 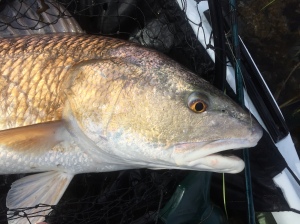 Really incredible schooling redfish footage from Jeremy Chavez over in Texas.  Check him out over at Casting Tales.