That is my friend Catch Cormier’s favorite line about the annual Spring kayak fishing tournament organized by BCKFC, now in it’s 11th year. After attending the event this past Saturday, he couldn’t be more right! Everyone involved put on one heck of a show for the 244 folks that signed up.

I missed out on the Friday night festivities and opted to leave super early Saturday morning. I didn’t make any scouting trips prior to the tournament so I decided to limit my tournament day options to places I’ve had success at in the past catching all three slam species; redfish, trout, and flounder. I was running a little late and wouldn’t make it on the water by 5:00am, but that gave me a chance to see just what LA 1 looks like during a tournament day. Every place you could toss a kayak in the water had a vehicle and the more popular options had vehicles lined up on the shoulder. It was pretty amazing to see just what kind of impact we kayak fishermen can have on a community come tournament time.

Lucky for me my spot was empty and I was on the water just before the sun came up. For the next 2-3 hours the winds were calm and the weather was perfect, the only downside to that was it meant the gnats and mosquitoes were out in force. The fishing though in that time was so good that the I wasn’t bothered by the bugs (being covered in clothing from head to toe helped as well). Fishing an oyster lined pond I had an incredible morning catching redfish and trout on topwater. When it was dark I threw a Spook Jr. in black/chartreuse and when the sun came up it was a Spook Jr. in bone. I couldn’t tell what the water clarity was upon launching but as the sun came up I could see that it was very nice. After landing about a dozen trout and maybe half a dozen reds the best of each were a 4 lb red and a nearly 2 lb trout. A good start, but I would definitely need to upgrade each.

I started working the spot for flounder focusing primarily on the places I had caught them in the past. Points and cuts in the marsh and anywhere the water moved were the areas I was targeting. At about lunch time I decided to pack it up and head up the road to try a different spot.

I didn’t realize just how windy it was after leaving the first spot, but I sure felt it upon arrival at the second spot. Conditions had deteriorated but I wasn’t deterred from trying to find a flounder. Water clarity here was very good as well – I guess I could thank that strong Southern wind for that. Bugs weren’t an issue any more either – thanks wind! Again I worked the flounder spots and again I was coming up empty. Knowing that I still needed to upgrade my trout and my red, I continued to throw topwater in likely looking spots. It wasn’ t long before I had a big fish on, only problem was it was a bull red! A fun fight, but not what I needed on tournament day. 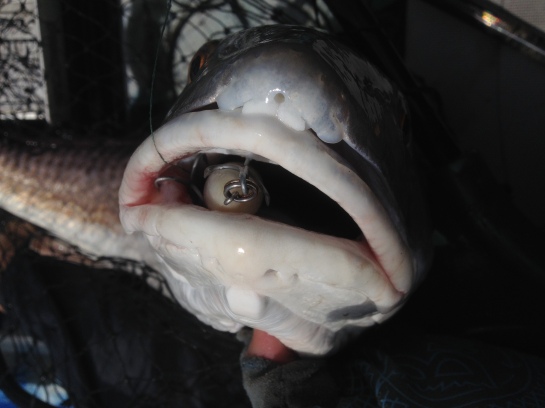 Catching that fish showed me that it was still effective to throw topwater even in terrible conditions, though it is harder to work the bait. Fishing the islands of a big bay I was getting hammered by wind, so I moved on to some marsh to seek shelter. Settling into a cut just to take a break I threw out some Gulp and watched as my cork immediately went under the water. On the other end of the line was a redfish upgrade at 5 lbs! Not a big upgrade, but better than nothing. On the next cast, this time out into the bay and back toward myself in the cut I watched as a red tried to take down the cork! Giving it a pop to take it from his mouth he luckily found the Gulp underneath. Another redfish in the boat, not an upgrade on weight but this one did have 13 spots! I didn’t want to get my hopes up on taking the leopard redfish category (I’ve made that mistake before), but I at least had a shot now.

It was getting close to weigh-in time so I decided to make my way back to the launch, which was of course into the wind across open water. Thank goodness for Jackson’s low seat position and the Aqua Bound Manta Ray blade size. I hardly ever use the low seat position, but this proved to be the perfect situation. I made good time considering I was plowing through building waves heading into the wind.

Back at Bobby Lynn’s standing in line to weigh fish, everyone began to recount the day’s events, which is one of my favorite parts of any tournament. It became increasingly apparent that there were a lack of unicorn, I mean, flounder brought to the scales. By the end of the day I believe only six were weighed. In a slam tournament that pays out to ten places this meant that the back half of the slam placings would be two fish slams (a three fish slam will always beat a two fish slam in a BCKFC tournament, no matter the weight). I knew I didn’t have a shot at a placing with my two fish slam, but it at least took some of those folks with two nice fish out of the individual species categories. The other thing that became apparent was that a lot of leopard reds were brought in. Not just any old leopards either, these were reds with more than a dozen spots – there were two 17 spot reds turned in! My little 13 spot wouldn’t hold up for first and barely hung on for 5th! At least I wouldn’t be going home empty handed though.

After weighing fish I was able to grab my captain’s bag (including the tee shirt Clayton is wearing in the pic) and shoot the breeze with a lot of the other competitors who have become friends over the years. Although the fishing was pretty tough for most (only 75 weighed fish) I didn’t see any disappointed faces, thus the real reason “there’s never a loser at Paddlepalooza!”. Between the captain’s bags, meals, tournament, raffles, and camaraderie among fellow like-minded individuals, you always come out ahead.

Speaking of raffles, the raffle items this year blew away what has been offered in years past. I should have bought more tickets than I did because there was a lot of good stuff on that table. The officers did a tremendous job with the raffle this year, I was impressed. It made me long for the days when placing in a category meant your pick of prizes from the raffle table.

In closing, Paddlepalooza XI was a ton of fun, BCKFC knocked it out of the park on this one. I had a great morning catching fish and was lucky enough to take home 5th place leopard red that afternoon. The fried fish dinner was excellent as always – a lot of credit goes to the guys that volunteer to help cook and serve. I think it was a great move to hire fish cleaners this year to help take care of the one job no one really enjoys. Those guys were far more efficient than the average Joe, really cool to watch them work. The raffle went fairly quick considering what it had been in years past and the prizes were off the charts. Things just seem to get better and better with this organization and tournaments. Heck, even the shirt this year was one of the best I’ve seen. Super soft with another great Brendan Bayard design; these things are like collector’s items for kayak fishermen down here in Louisiana. It makes me proud to be a small part of BCKFC and I hope we continue to grow and put on outstanding events. We do a great job getting in state folks to attend, but it would be really cool to see more out of state folks down. The more people we can get registered for events like this, the more money that gets directed to charities like Heroes on the Water and the Palliative Care Foundation of Baton Rouge – the real winners at functions like this. Here’s hoping Paddlepalooza XII is just as successful as this year’s event!