This past weekend was BCKFC‘s Paddlepalooza at Bobby Lynn’s Marina down in Leeville, LA. I had the pleasure of being down there Friday – Sunday. 201 people registered for the tournament, which is the most ever for the club, and according to Catch Cormier, makes it the 3rd largest kayak fishing tournament in the country.

I headed down straight from work Friday afternoon to see if the fish we caught last weekend were still there and what conditions might be like for Saturday. It was somewhat windy, the water was higher than last weekend and the clarity was worse. Undeterred I set off in search of trout and flounder. The trout were still where I had found them, in fact I found a few other places that were holding trout too. I missed one really good one in a different spot. I missed a flounder too, he came off as he leapt out of the water. So things were looking good for Saturday, my game plan was still formidable, it was just a matter of execution.

That night was the captain’s meeting where we were treated to a captain’s bag loaded with goodies, a nice big plate of pastalaya and a live performance by Clayton Shilling of his “Margaritaville” parody, “Leeville”. It was fun putting faces to names and catching up with friends met at previous events. As expected, pretty much everyone was still strategizing for Saturday, trying to pluck knowledge from anyone willing to talk.

Woke up early Saturday to launch the kayak, found the water to be low and winds calm. Too calm in fact; the gnats, mosquitoes, deerflies were thick in the marsh. Worst I have ever seen. I was covered up fairly well with only my hands and parts of my face exposed. I found out mosquitoes can cut right through breathable fabric though. The bugs died down when the sun came up. For the first time in a long time, the weather at a BCKFC tournament was gorgeous.

I made it to my spot and was happy to see no one there. Unfortunately nothing was biting, so I pressed onto where I missed the nice trout from Friday. Caught a few trout there, nothing big though, and I started fishing points and cuts slow looking for flounder. I caught a lot of 15″ reds while looking for flounder, then hooked into a nice 24″ red that weighed around 5-6 lbs. Later I caught a nice trout that ended weighing just under 2 lbs. I had the start to a decent slam, I just had to catch my flounder. Went back to the spot Blake caught all his flounder at last weekend and fished it hard for an hour, caught more trout, but no flounder. I abandoned that spot and tried to upgrade my redfish, but never found any that were bigger, so I headed back to Bobby Lynn’s for the weigh-in.

Without a flounder neither of my fish held up on their own for me to take home any prizes. It was a great day to fish though and I really enjoyed the weigh-in and awards ceremony. Some awesome fish were caught, lots of big trout from kayaks. Not too many flounder were brought in, so those that caught them had a good shot at the slam. Ryan Doty took top honors with a cajun slam with 10lb 14oz. John Bergeron took home big trout with a 5lb 14oz hog on topwater, a first for him. Jeff Maher had big redfish with a 7lb 4oz slot red. Stephen Christmas won big flounder, with one that was around 2lb 2oz. Allen Melder won the leopard red category with a redfish sporting 8 spots. When the final results get posted I’ll throw them up here (see below). 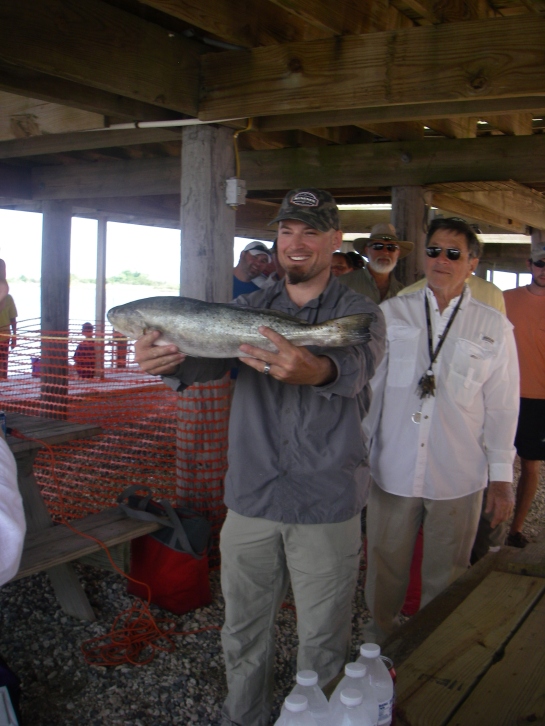 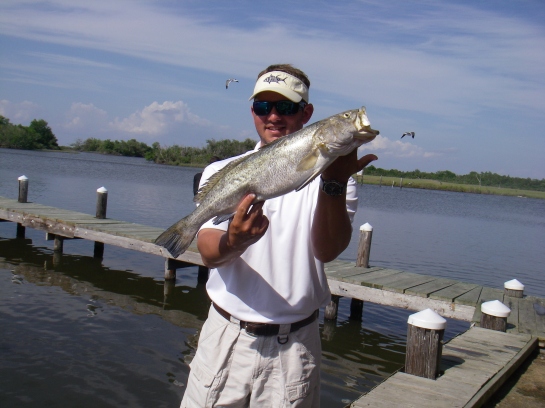 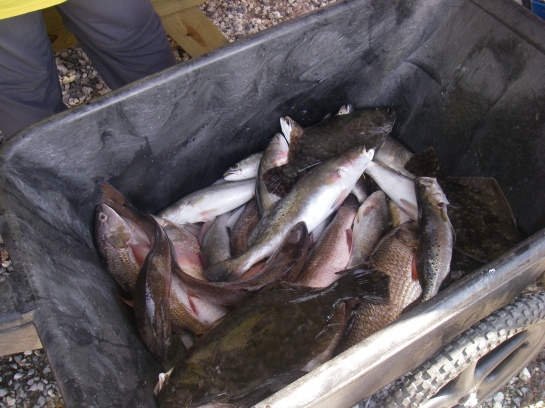 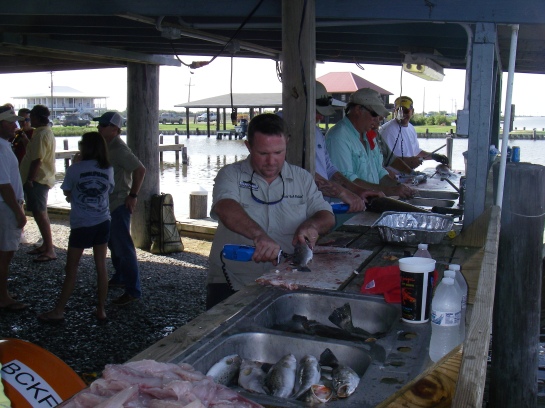 A big thanks to everyone that helped make this event happen. The food and fellowship were unsurpassed. I had a lot of fun, I look forward to it every year, but this is the first one I’ve made in 2-3 years. Fall N Tide should be just as fun in October.

Update: Out of 201 folks registered, BCKFC had 88 people weigh fish. 22 of those folks weighed in a slam (red, trout, flounder). Top 10 slam places pay out and are not entered in individual categories. My redfish placed 19th and trout 16th – so not quite what I was hoping for individually, but could have been a different story if I found a flounder. 10th place slam was 7lb 8oz and I had 7lbs in just redfish and trout! Darn those elusive flounder.