My first full day fishing in Panama was a lesson in diversity. It was very cool to see four different species come across my hull in 1.25 days of fishing. Our second full day started with another brilliant sunrise. Every morning we were greeted with an amazing sunrise. Not to be outdone, every evening we were treated with an equally impressive sunset. Life in the tropics is nice like that.

I wish I could say I killed it our second full day out, but the truth is I sort of took one on the chin. Jim found fish in the morning with a popper, catching a few small jacks near a rock pile. I tried to emulate his success and had one on too, but he soon threw the hook. We worked the area until lunch and the only thing I had to show for it were more hawkfish.

After I ate lunch I set out to try and catch us some bait. I managed to catch one little guy on a sabiki rig, but was unable to catch any of his friends, so after using a JK Nalgene as a bait tank, I let him swim free. I was really after the bonito since big bait catches big fish right? I was chasing them through the bay much like on our first half day fishing. I made it into a little shallow cove that had a mangrove covered shoreline – had this been on the Caribbean side I’m sure it would have been covered up in bonefish, but all I was seeing were parrotfish and I don’t think I had flies for parrotfish or any idea how to go about catching them. There was a rocket of a fish that would scoot his way through the cove, marauding bait fish then fleeing like he just robbed a bank. Hennie thought it might have been Pacific sierra mackerel. I had my fly rod with me but getting a fly in front of that fish was fruitless – he moved at warp speed! I did get a follow from a mangrove snapper and briefly had a pufferfish on but nothing brought to hand. The mangrove tunnel up a creek was the highlight. I wish I had more time to explore, but we were headed back out to the deep water.

Jim’s bag had arrived during lunch and much rejoicing was done. It was a huge relief to all of us and I know that Jim getting all of his equipment back and set up the way he likes it on his kayak made him much more comfortable and thus a better fisherman for the rest of the trip. Fishing isn’t just a physical sport but a mental one too and getting that dropped from the back of all our minds was a good thing.

That afternoon’s fishing was still tough though and my struggles continued. In fact I’m still kicking myself about the what transpired that afternoon. I was working the rock pile in the picture below, casting a popper up to it and working it back out. I had made a lot of different casts around it hoping something would take notice. Normally I would make a few casts and move on, but I was also freelining a live bait behind me and wanted to keep this bait in the channel to my rear. Choke points like this are typically fish highways and it made sense that eventually something would hit it so I was working this one spot pretty thoroughly. I finally get hit on the popper and I know it is a good fish. I got a solid hook set in him and he took that popper and went straight down, my drag be damned. My popper ended up hung on the rocks and I couldn’t pull it out. I’ve never had that happen, lesson learned that my drag needs to be set to stop in Panama. 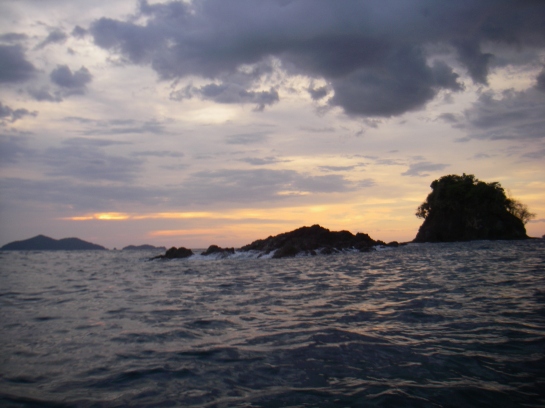 I moved away from the area to let it settle and fish a different rock pile across the channel. In that time the camera boat sees something in the water. Wouldn’t you know it but my popper had floated back up. It must have still been in the fish’s mouth when I broke it off and he worked it free. I should have played him longer, free spooling, hoping he would swim out the rocks, but I was impatient. After a little time I came back, this time with a bigger popper and a stronger drag setting. It didn’t take but a few casts for a fish to come clear out of the water to attack my popper. The reddish/brown body was a dead giveaway that I was dealing with a big cubera snapper. This time I set the hook on the fish, fought him for a good 15-20 seconds and then the line went limp and my popper floated up. He must have been barely hooked, I was heartbroken – again. That was the how my second full day fishing in Panama ended, the big cuberas played me for a fool. 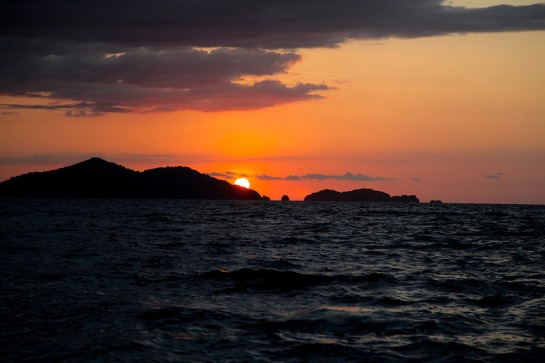 Having little experience fishing for big ocean fish, losing fish is all part of the learning process. It was a tough lesson to learn too because it would have been the biggest fish we had caught thus far and would have been a great part of the episode. You travel so far, you want everything to go right and try to eliminate these kinds of mistakes, but they still happen.

The next morning we moved to an entirely different location. This spot was probably the most scenic we had fished on the trip. A small archipelago of islands in the middle of the ocean surrounded by swells and currents, even some that dissected the islands, and created chaos that looked difficult to navigate. A beautiful, potentially treacherous spot. I couldn’t help but think of that final scene from “the Goonies” when One-Eyed Willies pirate ship goes sailing off into the horizon – it looked like that, except more tropical and less like the Pacific NW. Boiler rocks are pretty intimidating to someone who has never paddled around them. We don’t have rocks in south Louisiana and the depth of the water I fish is nowhere near what it was in Panama. So initially I was hesitant to get too close to them but as the week progressed I became more comfortable around them. Your awareness and your paddle strokes have to be spot on because the last thing you want is to get carried into the rocks. 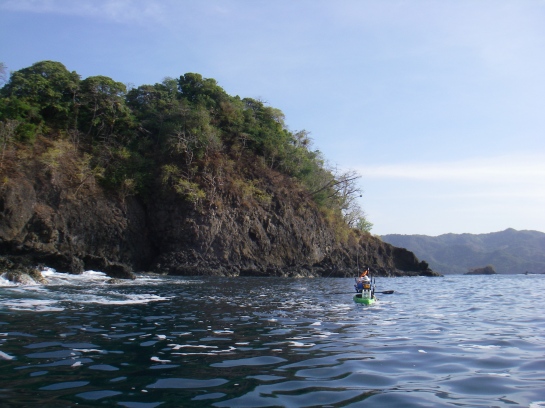 We fished hard around these islands and I don’t think we had anything to show for it by lunch except for some nice pictures. Besides the pictures the best thing to come from this spot was that we had a whale shark encounter. I say we, more specifically, James’ boat got bumped by a whale shark, he stuck his GoPro in the water and got the back end of it swimming off. Unfortunately the rest of us didn’t see it but he does have video to prove it. At about the same time Will on the camera boat said they saw a humpback whale surface then go under for awhile and come up a good distance away.

Since fish were proving to be hard to come by we headed elsewhere, back to where the locals said we needed to be from the get go and finally our luck turned around. With his Raymarine Dragonfly Jim was able to find some underwater peaks that had fish holding around them and he started getting hits vertical jigging. I was able to get in on the action when a jack hit my live bait.

Finally a fish that pulled some drag and what I believe is another new species for me on this trip – a bigeye trevally. The depth finder proved to be a very valuable tool for this trip and I didn’t really realize it until this fish was caught. I’ve never used one in the past and even though I didn’t have one on my kayak it was helpful that someone in the group had one – and knew how to use it. This would prove to be a kind of turning point for us. The nearshore areas we worked so hard just weren’t producing so we shifted our focus to deep water spots, working those areas with live bait and by vertical jigging. This was key because the next two days of fishing were the best we had the entire trip.