I haven’t been fishing since Fall N Tide in October, but I managed to make it out twice in the past 4 days for two of the most  productive days I’ve ever had catching redfish. The sightfishing was exceptional this past weekend.

I’ve been working a lot this past month, and when necessary, even on weekends, so I’ve had very little time to fish. When Thursday rolled around and I was free, I had to make that two hour run south to the marsh.  It was a chilly bluebird day, with winds steady from the N around 10 mph. Not ideal conditions, but doable for someone who hasn’t fished in awhile. I took my time getting down to my spot, arriving at about 11:00am. When I got there I found clear, low water, conditions that were near perfect for sightfishing. The wind was only thing keeping it from being perfect. The wind was helpful though. It puts a little chop on the water helping conceal me from the fish. It also pushes a lot of water out of the marsh, making our low tides lower, decreasing the amount of water a redfish can hold in and thus less water I have to cover to find them.

I was fishing a fairly new spot to me. I fished it once before and had luck, but I wanted to explore it even further while I had a chance. I made the right decision to fish this spot because the redfish were everywhere. Sometimes they were alone, other times they were in pairs, and still other times they were in pods – groups of 5 or more reds. These pods would porpoise out of the water, feeding on anything in their path. In some places their backs were out of the water as they munched on shrimp in the shallows and other places they were just floating, clear as day in water that had excellent clarity. Unfortunately I left the fly rod in the truck, thinking the wind would leave me frustrated, but there were so many fish I didn’t even notice the wind. The action was so nonstop that I hardly had time to break the camera out, in fact I didn’t even take one picture of a fish. I did film some video that I will need to edit. Most of the reds I caught I tagged, I had fish in the freezer and decided against keeping any more. Most were 25″ long, nice upper slots reds that had a lot of fight in them. When the water cools down like it has the fish seem to be energized, never quitting once they’ve been caught. I broke one rod trying to high stick a fish close to the boat, I got pretty good footage of that with the GoPro. Thursday was awesome, a great trip to have when you haven’t fished in a month.

I thought I’d have to work Saturday (which is why I was able to take off Thursday), but that was pushed back to Sunday, so I had the option of fishing or heading out to tailgate for the last LSU home game. Unbeknownst to Blake, the decision was up to him. If he was in, than I would fish, if not, than it was out to tailgate. It was too hard to pass up a fishing trip for Blake, so we were heading down to the marsh that morning.

The conditions were very similar to Thursday, however the winds were higher. The hope was that with conditions being so similar, we would have a day much like Thursday. When we got to the flats we knew we hit it right again. In fact there were more fish Saturday than there were on Thursday. I’m not overstating it, the sightfishing was unreal. The word epic gets thrown around a lot, but this was an epic trip. I remember being in one pond that was about as big as my living room, there was a pod of reds in that pond with no less than 20 fish just cruising around. Everywhere we went the fish were there; bayous, ponds, bays, flats, it didn’t matter. The amount of shrimp was unreal too, they were popping out of the water without even being spooked by fish. These reds were gorging themselves and we just happened to be in the right place at the right time. This time I remembered to bring the fly rod, and using a fly that Blake had tied, wore them out. I filmed the morning portion of this trip and need to edit it down before I share, but there should be some good footage. Hard to imagine a day could top Thursday, but we had it on Saturday. There were a few times we doubled up, a few times I could have doubled up myself. I brought 14 tags with me on Saturday and used them all. First time I’ve ever tagged out. A lot more variation in size on Saturday than Thursday, but pretty much every fish was medium to upper slot sized, with a couple below and a couple above. 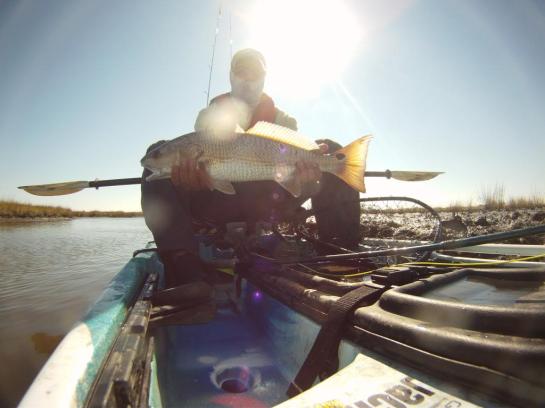 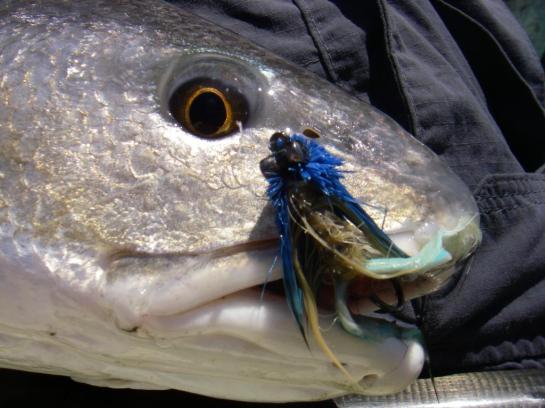 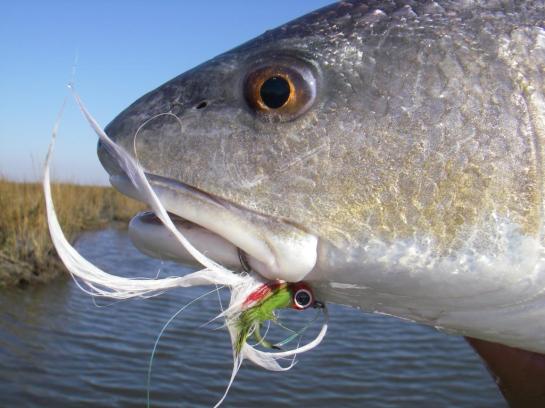