I thought Easter was going to be a pretty laid back holiday for me, but it turned into quite the weekend. I got a call from Amanda’s cousin Blake on Thursday seeing if I could do an overnight trip offshore on Friday. The plan was to fish for swordfish that night and tuna at daybreak, conditions were pretty favorable for night fishing with the full moon. It didn’t take much to convince me I needed to go on this trip, I just had to make sure I wasn’t already booked Friday and Saturday. As my luck would have it, things were pretty wide open Friday night into Saturday afternoon.

I don’t know too much about swordfish except that they are rarely caught during the day and when they are it is at depths over 1000 ft. It is a little easier to catch them at night and they can be caught closer to the surface, but Blake has gone out for swords about a dozen times and still has yet to catch one. He sounded pretty confident, but I wasn’t getting my hopes up for a sword. Tuna though is a different story, I know they catch tuna fairly regularly, so I was pretty excited about that. Blackfin, yellowfin, it didn’t matter to me as I still had not caught any tuna.

We headed out of Venice later than anticipated due to the late arrival of the other members of our crew; Dustin, Jeremy, and Aaron – essentially the same group we had for Tarpon Rodeo last year. We gave them a hard time about the late start, but it really didn’t matter, we had all night to fish. The weather was beautiful on the ride out, the moon was bright, winds were calm, and the air had a little bit of a chill to it for April. As we got further from the launch though, the wind and waves began to pick up and we knew we would have to deal with the chop all night long.

Our first destination was a rig to try and catch some hardtails for live bait in the morning. Upon arrival there are fish busting the surface all over the place. I started throwing a topwater on heavy spinning tackle and before long I’m hooked up. After a short, but nice, fight I boat the fish and it’s a blackfin tuna. My first tuna, on topwater no less. We all proceed to catch blackfin tuna on jigs and topwater and the trip has already started off right. I broke out the fly rod for a little while, but never got a bite. We could have spent all night at that rig culling blackfin tuna, but we were after swords so we pressed on.

We reached our spot, in at least 1000ft of water, set out of Hydraglow lights and set out 4 lines at varying depths. The lines were baited with squid and glowstick or lights and looked very complicated. I’m out of my element offshore, so don’t expect me to go into great detail about the equipment or anything else for that matter. One thing I know for sure, no electric reels were used, or are ever used on Blake’s boat.  Electric reels are for sissies. End of story.

Anyway, so swordfishing feels a bit like catfishing since you just sit there and watch your line. Things got exciting though when Dustin got a bite at around 1am. Sharks are a common bycatch when fishing for swords, so fingers were crossed that it wasn’t a shark. When it surfaced, it was obvious it wasn’t a shark and that they had finally gotten their first sword. A few tense moments followed, the fish was gaffed and brought in over the gunnels. There was an explosion of cheers and expletives when that fish hit the deck. It was pure, unadulterated joy. Really an awesome experience to behold. The sword was small, not marker size (100+), it would keep though, size was inconsequential. The goal was to catch a swordfish, that goal was reached, we were all happy. 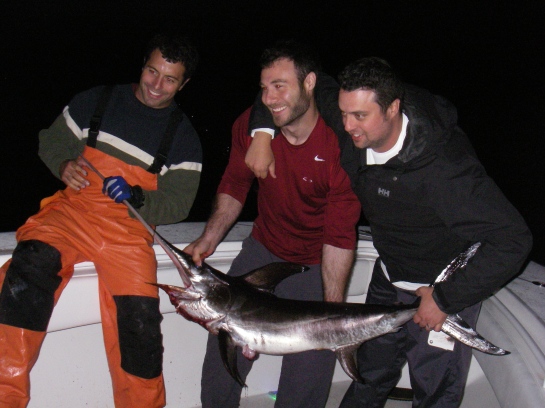 With renewed vigor we continued to drift for swords. Our drift was very slow though. The wind and the tide were opposed creating a situation in which we were moving at about 0.3 mph. So we weren’t covering a lot of distance. A few hours passed and we decided to run to a different spot and start a drift there. At around 5am I hear a short whine from Aaron’s drag. The drags were set so loose on everyone’s reels that rogue waves would make them sound every once in awhile, so I didn’t think much of it. However, Aaron’s drag hadn’t sounded all night. About a minute later he notices his line is slack. He asked us if we were caught on him and we didn’t think we were so Dustin told him to just start reeling. Aaron reels this slack line all the way to the surface before he realizes he has a fish on. When this thing saw the boat it was on! The fish took off back down and Aaron hammered down the drag, meanwhile to keep it from getting in the prop Blake is maneuvering the boat, once that happens pretty much everyone is tangled in Aaron’s line. I clear my line and get my bait out of the water. The fish surfaces again and we see the size, it’s a sword, much bigger than the last one. Gaffs are sunk into the fish, harpoons were in hand but never deployed. The fish was dragged over the gunnels and again there was a moment of pure joy. The fish wasn’t ready to quit though and started throwing his head around. Blake clubbed him until he quit shaking and another disaster was avoided – those bills are sharp! This was a marker sword and now we had 2 in the boat. It’s as if they knew exactly what they were doing. 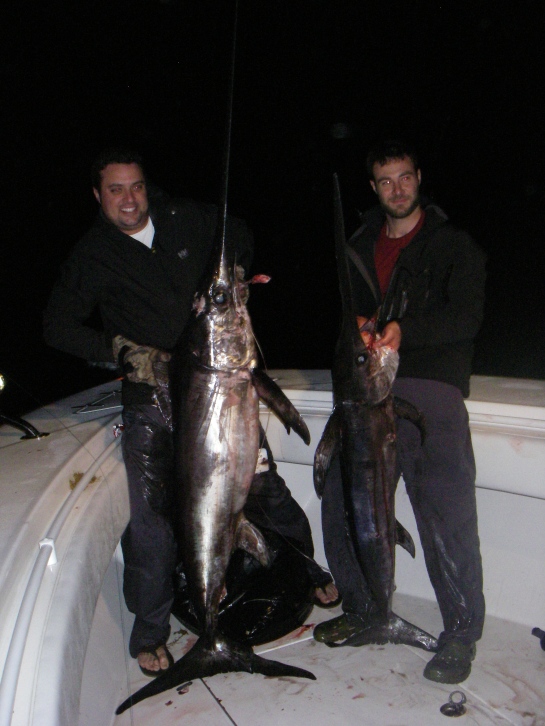 We continued to drift, unsuccessfully, until first light, then we headed to a nearby rig to try our hand on some tuna. Again fish were hitting the surface and again a cast with a topwater yielded a tuna. This time it was a small yellowfin. So small in fact, that I threw it back. It may have kept, but this guy needed to grow up.

We caught one or two blackfin at that rig as well, but no more yellowfin. Everything was small, so we headed on to another rig. Blake jigged up a nice amberjack then caught a bearded brotula while dropping for grouper. Pretty cool looking fish, like a mix between an eel and a choupique. He said they were just as good to eat as grouper, so it went in the box. I made him take a picture with it at the cleaning table. 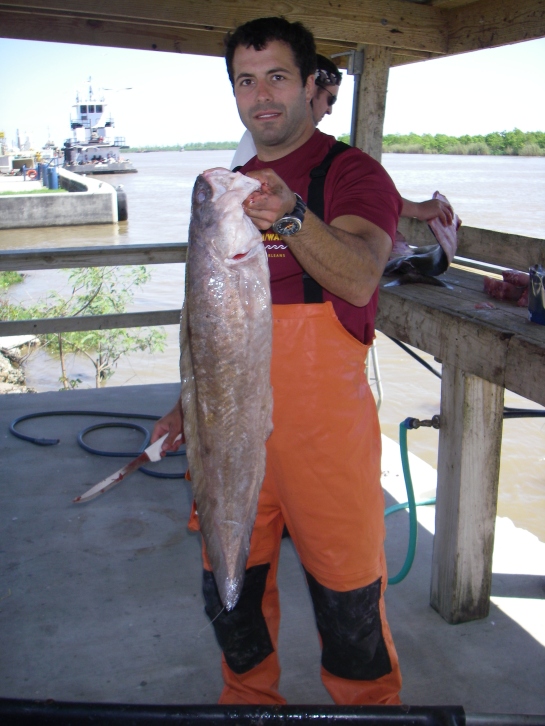 We kept dropping for grouper but couldn’t get into any, just a couple of sharks. So we pulled for some wahoo, had one bite, but lost him after a short fight. Follow up pulls yielded no results. By this time it was late morning and we were worn out so we headed back in.

It was a great trip, we boated 2 swords, multiple blackfin tuna, a small yellowfin, a brotula, and a couple amberjack. I think the guys got validation for all the hard work they have put in on swordfish and that was worth the trip alone. Overnighters wear you out! I got back to Amanda’s parents house (we were spending Easter there) and I was exhausted. I showered, napped, woke up for dinner, then slept for a very long time. Can’t wait to do it again though. I know that they will further refine their swordfish technique and in no time will have it mastered, the way they’ve mastered fishing for grouper, which reminds me, I still need to catch one of those big suckers. I knocked out my tuna this trip, though I left room for improvement. Now I need a grouper, though, and a sword, the list just keeps growing.

Thanks and congrats to Blake and the gang for getting their swords and continually putting me on the offshore fish. These guys are incredible fishermen and it has been a lot of fun fishing with them and learning from them. I always look forward to the next trip on Funny Shoes II.