We arrived in Denver Thursday around noon via direct flight from New Orleans. Prior to leaving a co-worker and I were talking about me heading to Denver and he sent me a link to an article on The Chive about the conspiracy theories surrounding the airport – an interesting, albeit strange read. Never having been through the Denver airport I had no idea, so of course I had to take a picture of one of the murals once I got there. Sure enough the creepiest one was on the way to baggage claim. After that we picked up a rental Jeep Patriot and hit the tollway to head north toward our cabin. We were taking our time as we had a few stops to make along the way. 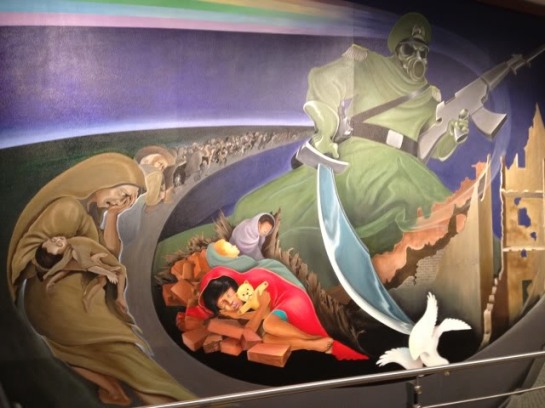 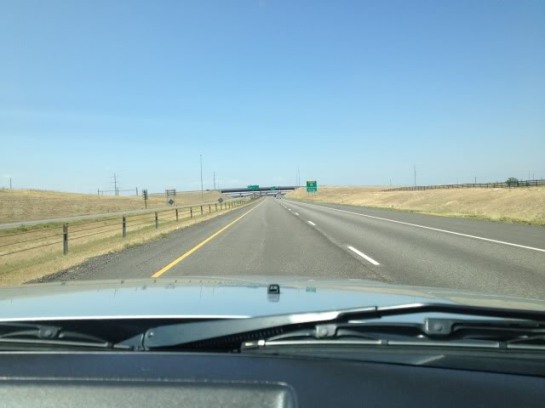 First stop was Laughing Grizzly Fly Shop in Longmont, where we talked with Mike Kruise and Dick Shinton about fishing in the Park. I did a bunch of research prior to coming out to Colorado and had some places we might want to hit in mind, but these guys helped narrow down that list and pointed us in the right direction to find the target species, greenback cutthroat trout. Local knowledge will always trumps what is picked up in a book or on the internet, so this stop was a must. The shop itself was very cool and they had a great selection of flies, though Dick helped us pick out what works in the Park. It was great meeting/chatting with Mike and Dick, they couldn’t have been more helpful and down to Earth, really made us out-of-towners feel welcome. Definitely, go see ’em if you’re ever in the area. 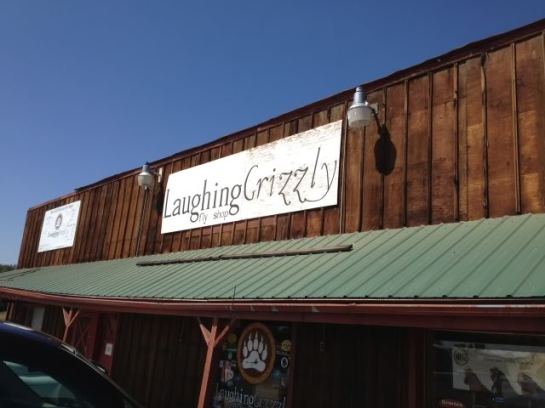 Next we picked up groceries and a couple local beer variety packs before continuing our trip up to Estes. When it comes to vacations & beer I always make it a point to try something local/can’t get at home, so this trip was no exception. And with Colorado being known for it’s craft brew, I knew we really couldn’t go wrong. In Lyons we stopped at Oskar Blues Grill & Brew for lunch. Dale’s Pale Ale is one of my favorites, so I knew the beer wouldn’t be bad. It was cool to see the St. Vrain from the table at lunch, I couldn’t help but think about Gierach, the original Trout Bum, we’d basically be fishing in his backyard. The burgers were above average and Blake and I got to try a couple beers besides Dale’s, but we stopped at one since we just flew in. I’ve been paranoid about getting altitude sickness in the days leading up to the trip, so we made sure to stay hydrated, slamming waters whenever they were available. Heck, I even started taking ginkgo daily because I read it helps circulation. I’m happy to report that neither of us had any problems with the elevation the entire trip. 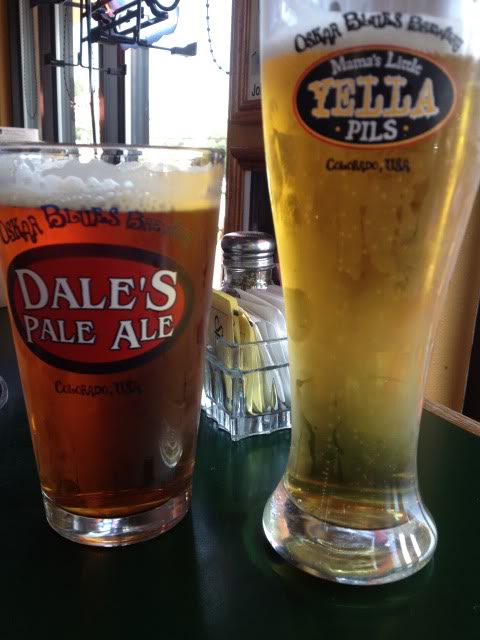 After a short drive from Lyons we made it to Estes Park. It wasn’t long before we got a glimpse of our first wildlife, turkey, when we stopped to take a picture of the sign. Sidenote, I find it funny that I see turkey, squirrels, rabbit at home a good bit, but for some reason felt compelled to photograph them all in Colorado. After the turkey were the elk, lots of them, throughout town too. That came as a surprise to me, but by the end of the trip I realized it shouldn’t have. They were everywhere in the Park and outside the Park, big bulls following herds of females, bugling at times. I read about the elk, but I never expected to see so many. I guess I’m just use to living in Louisiana, where if it’s brown, it’s down. 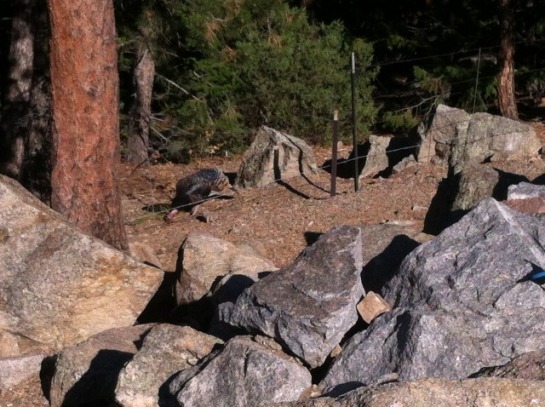 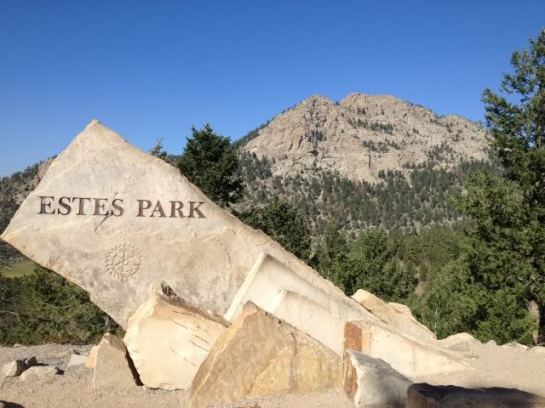 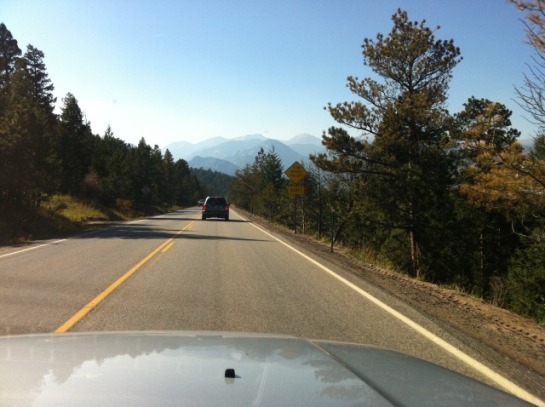 The cabin was a small 2 bedroom deal, situated right on the Big Thompson River. The perfect size for the two of us and it even came with wolfpack curtains. Curtains that were certain to ward off any curious wildlife. We weren’t sure how much time we’d spend fishing here, but it was nice to have the option to cast a line out the back door. Realizing we were burning daylight, we quickly unpacked the car and got our packs ready to go to do some late afternoon fishing in the Park. The inflated bag of chips was our first sign that there is a significant elevation change from Longmont to Estes. 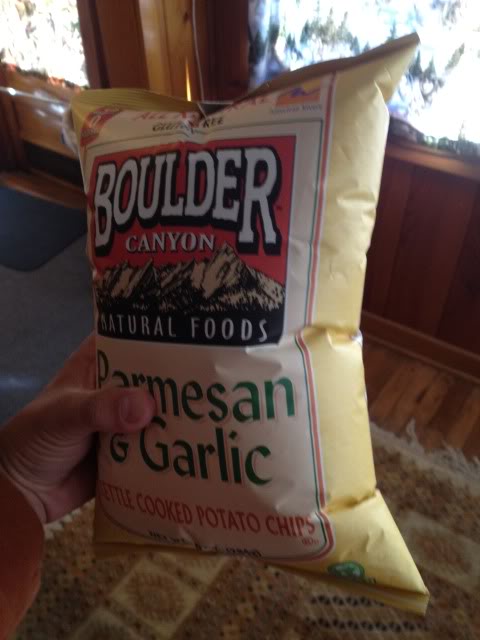 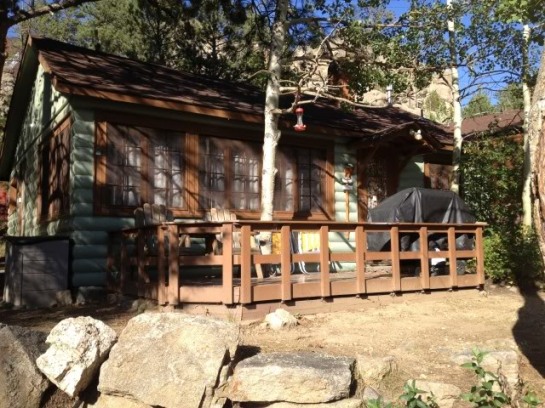 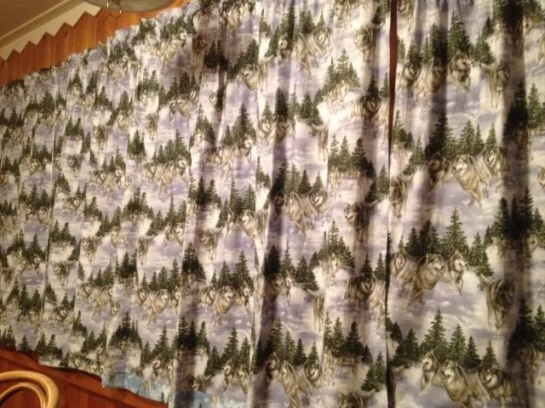 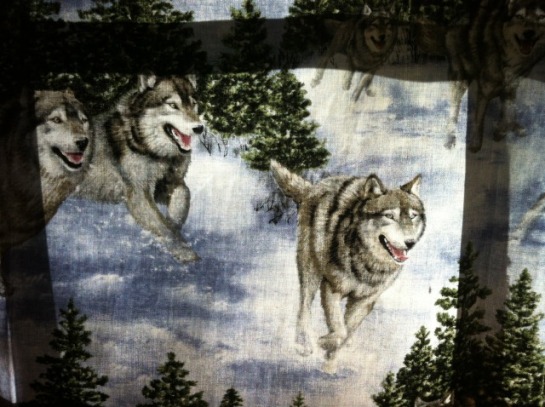 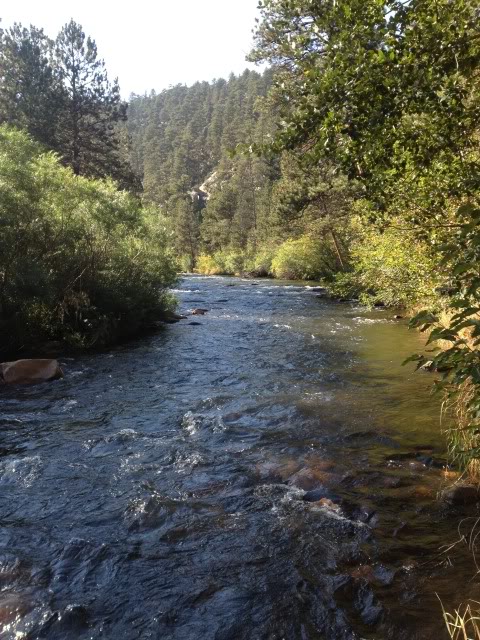 We fished Moraine Park that evening, since it was close, we didn’t have much daylight, and seeing elk was still fresh and cool. Meadow fishing was new and different for us, it was something we wanted to try while we were here, so fishing Moraine was pretty fun. The water was crystal clear and the fish hid in the undercut banks, you would see them dart out to hit a passing meal, or better yet one of our flies. We caught a few brookies and brownies, our first fish to hand in Colorado. Top that off with a couple celebratory brews back at the cabin and we couldn’t ask for a better start to a great trip 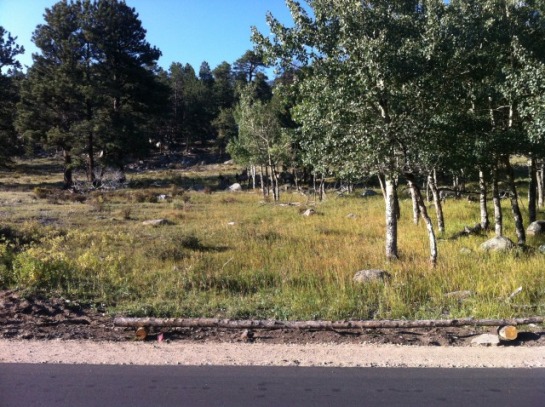 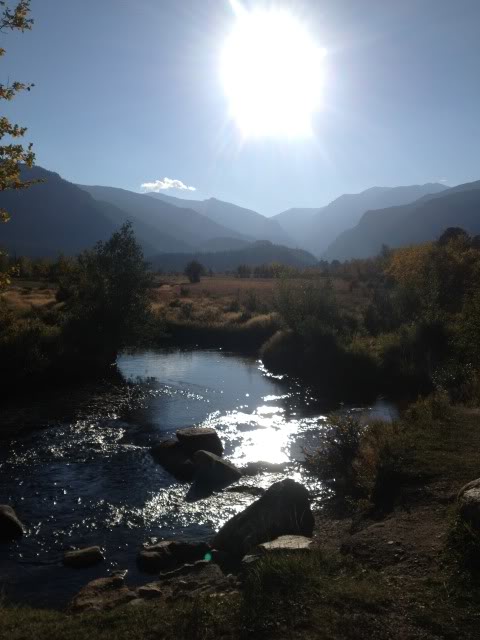 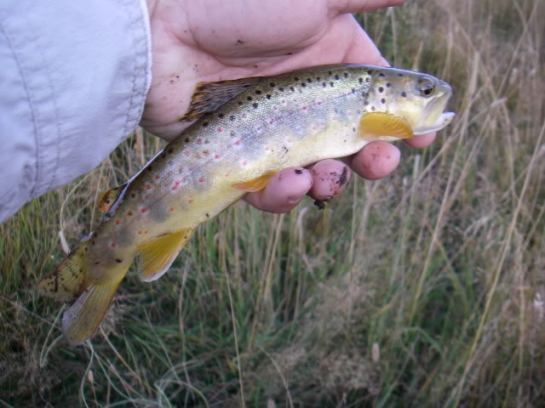 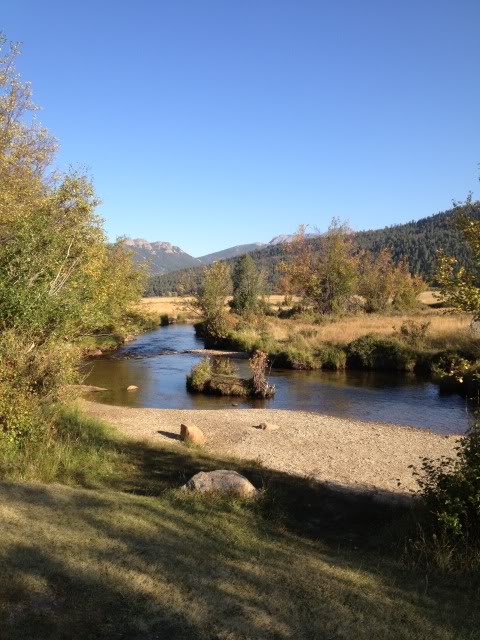 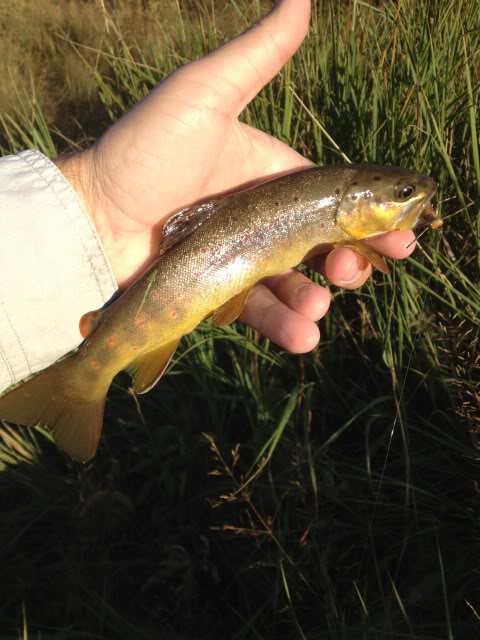 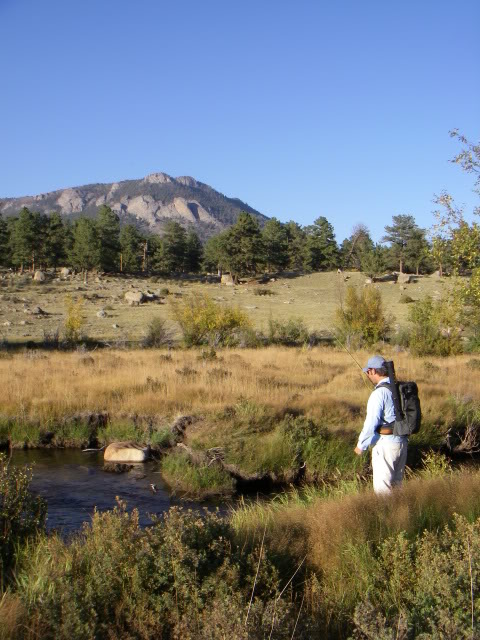 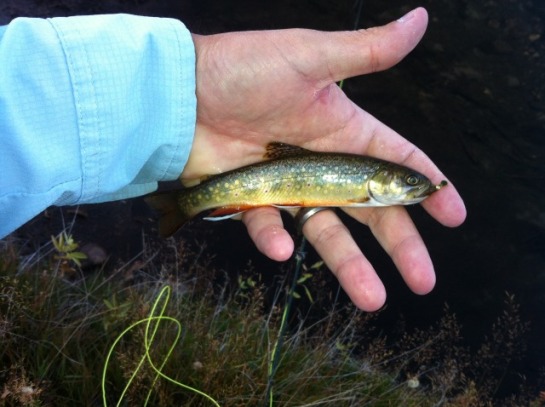 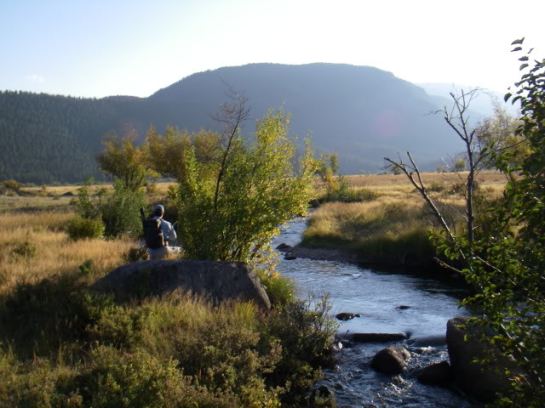 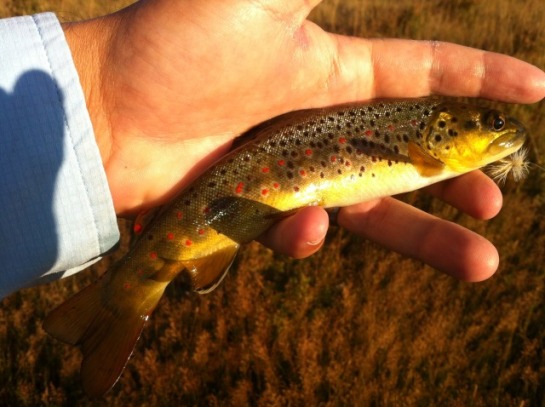 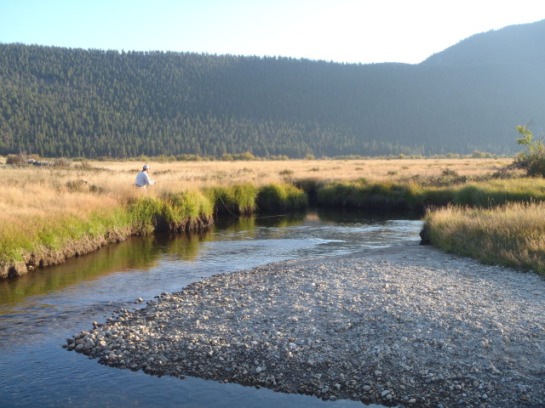 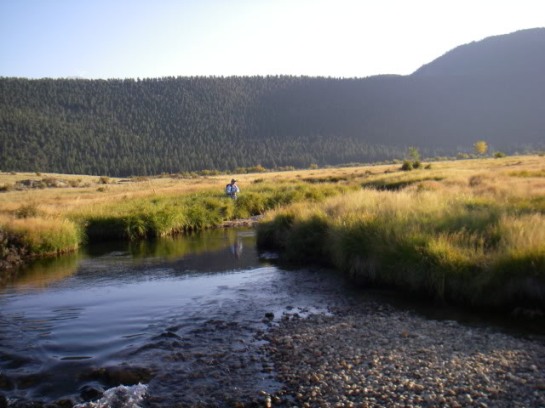 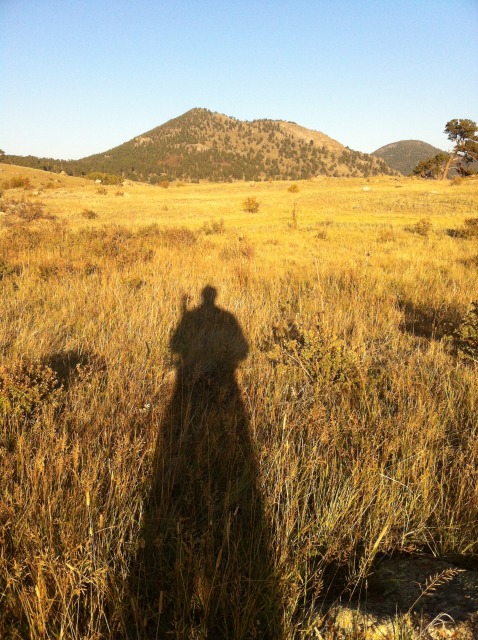 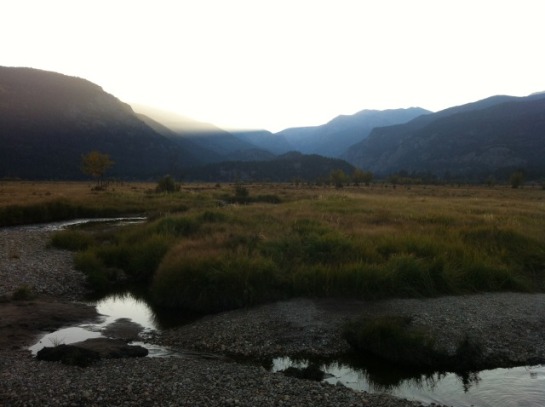