There were three separate day trips I took down to Fourchon in January and February of this year. These weren’t extremely productive trips, which is probably why I didn’t bother to write about them, but like the Bayou Fountain trip, they were very instrumental in helping me win the fly division of the BCKFC/Massey’s kayak CPR tourney last year.

In late January I went for the homerun and made a long-ass paddle to some proven big redfish flats, but when I got out there the bulls were not there. I did manage to fool a slot red and then followed that up with a nice black drum so at least I had something to show for my long paddle.

It was a little disheartening failing to upgrade my redfish for the contest, especially because the weather cooperated for me. It just meant that I’d have to give it another shot in February and hope for the best.

I watched the weather until I saw another window to make a decent paddle in and when it came I jumped at the opportunity. This time it didn’t take long to get the upgrade I was looking for, but at 33.5″ it still left room for me to target an even bigger red.

I kept at it, but sightfishing was proving to be tough. The winds were light and favorable, but there was so much fog that it made seeing anything just about impossible. I landed one more redfish on the day coming in at 29″ and decided I’d call it a day and hope for the best with the tourney.

It was late February and I was checking the leaderboard the night before the last day of the tourney. I was sitting in first place the last time I had checked, but now I currently was not. I needed to upgrade my trout as someone had knocked me down a spot and lowered my point total. I was already planning on fishing the next day, but where I was planning to head was not known for trout so I had to hatch a new plan while laying in bed.

The wind was not as calm as the previous time I’d fished, but I had arrived at a spot that I had in mind to cover. I knew it held trout in the winter, I just hoped they were still there. After a bit of blind casting my rod came tight and after the seeing the familiar headshake of a trout I knew I had my upgrade.

It didn’t take much to best my previous trout, but it was enough to bump me back up a spot and into a tie for points, so long as other folks weren’t upgrading fish on the leaderboard.

I kept fishing hoping to run into more trout and improve my chances, but that was the only one I came across. I caught one more slot red before calling it a day. The wind was getting pretty brutal so it was getting tough to fish spots effectively.

Thankfully the one trout proved to be enough and I was able to win the fly division of the tourney. It was a pretty awesome feeling to be able to catch three upgrade fish in four trips right at the end to sneak out the W. I had fished the fly division of the CPR tourney for several years now and always come up just short so to finally win one was nice. I’ve got nothing but love for BCKFC and Massey’s for continuing to put on a tourney for us fly rodding kayak fishermen.

I saw a good weekend day to go fishing a couple weekends back and pounced on it.  The weather looked pretty cooperative and usually if you can catch mild weather in the winter luck will be on your side.  I woke up early and got on the water shortly after sunrise.

It was a chilly start, but I knew the day would warm up so I wasn’t too bothered by the cold.  Besides, the winds were light and the clouds were nowhere to be seen, it was looking like it could be a pretty good day to sight fish.

The tide was low, which is normally not a bad thing for sight fishing, however this tide was extremely low.  This extreme low had the water pretty dirty.  I knew it was low when I launched, but I didn’t realize that it would continue to fall throughout the morning.  There were entire flats that were exposed that I’ve never seen exposed.  The fish were nowhere to be seen and even when I did see them it was too late for me to make a cast.  Fishing was tough.

I did manage to avoid a skunk though.  Right around lunch I had made my way to a flat where I’ve always found fish.  It is off of a deep canal, so even if the flat was mostly exposed, there was still some refuge that could be taken in the canal for the fish.  Sure enough that’s where they were.  There were a handful of big black drum (they looked white in the water) with their tails up in the canal.  I moved into position and dropped my fly in the path of one of them and he vacuumed it up.  The fight was on. 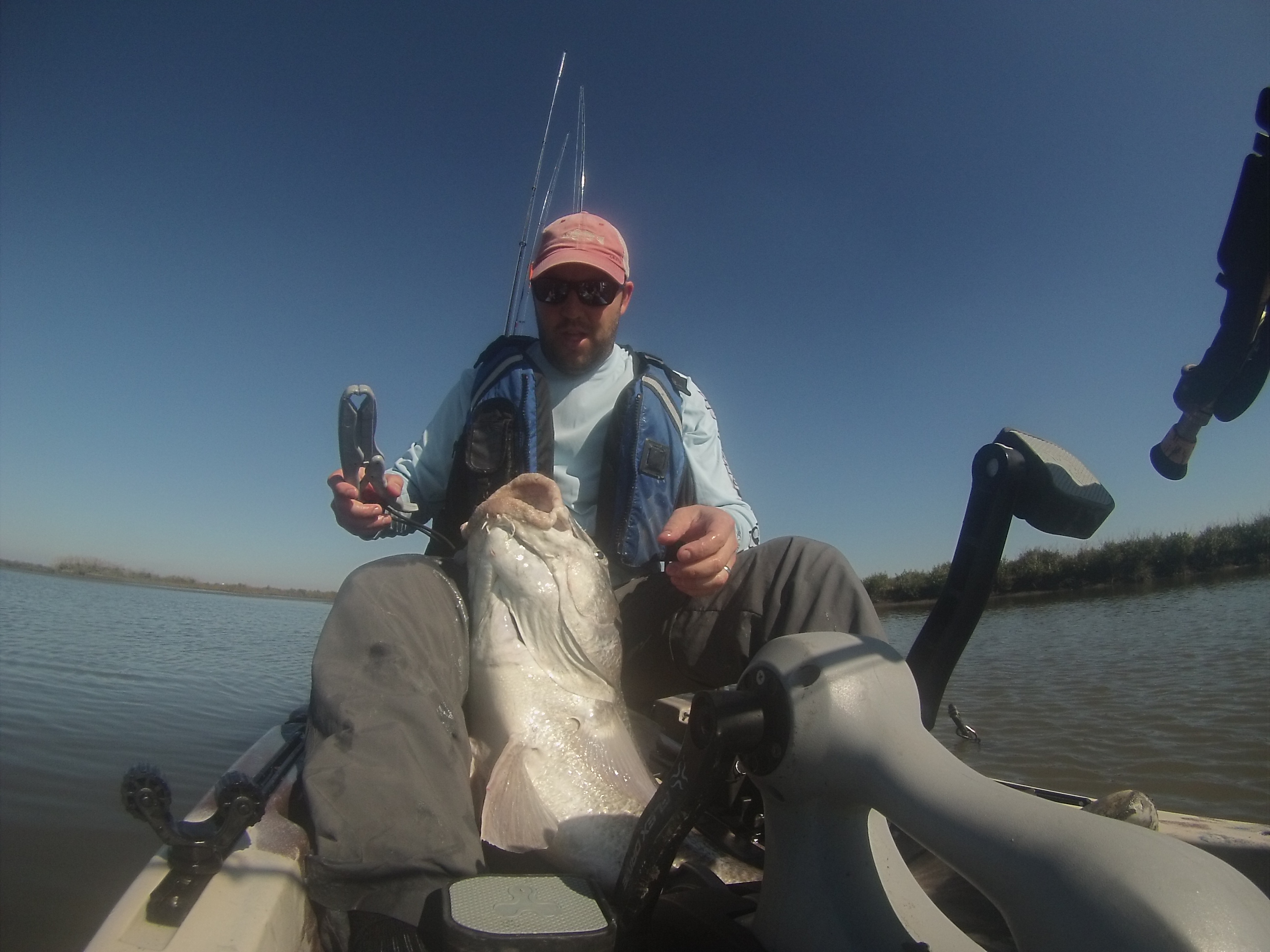 It was a hefty fish.  It gave me a couple of good strong runs and put a solid bend in the old TFO Mini Mag.  The drum was a square, nearly as heavy as it was long (35 lbs, 37 in. long).  It was a fun catch and I was glad to have caught something, even if it did slime up the boat and my pants. 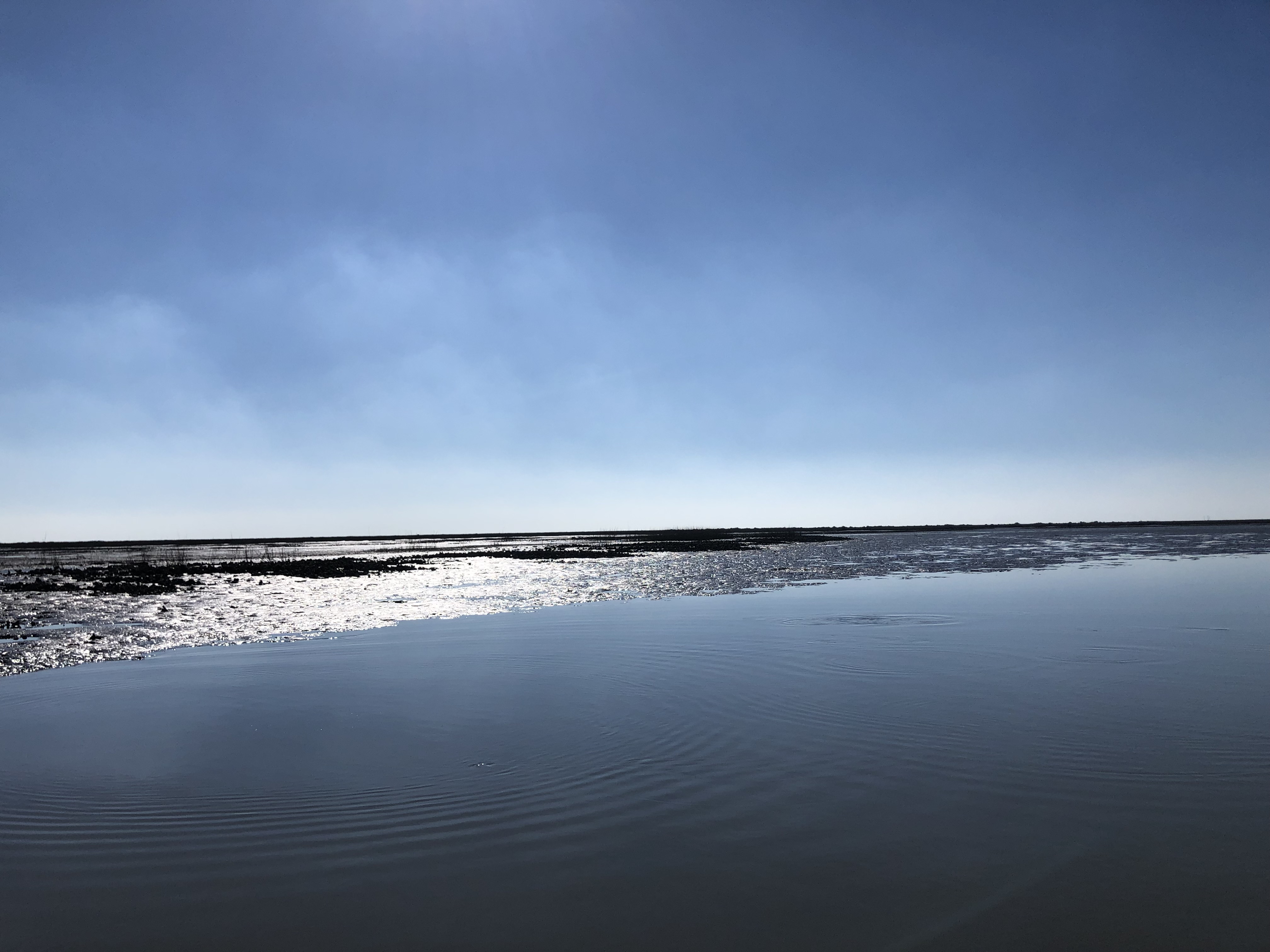 After that I tried to make my way through the marsh back to the launch, but without any water it was futile.  I headed back the way I came, through the bay, and ran into Scott from Bayou Chronicles and his neighbor on the paddle back.  We chatted and fished for a bit.  He ended up catching a beast of a redfish later in the day as I was already loading up the boat to head home.  The tide was coming back in after lunch and if  I were patient enough I probably would have had better opportunities at redfish in the afternoon.  It had been a long day on the water for me though and I packed it in.  There’s always next time I guess.

Following my trip with Blake I met up with the Bama boys, who were in Grand Isle that weekend.  That gave me another opportunity to fish with my buddy James, the idiot lawyer as he’s affectionately known in our circle.  The weather forecast had me scratching my head on where I thought we could do best that morning, Fourchon was what I came up with, a spot we’ve fished together in the past.  When winds are stiff I tend to lean on fishing in Fourchon due to the greater presence of mangroves, which seem to provide more of a wind block than your standard marsh grass.

We made our way to the ponds we’d fish and at my first stop I ended up catching a nice upper slot red on topwater.

A great start to the day, however, things were pretty slow going immediately after that.  We fished a few tried and true areas and had little luck, but finally there were signs of life.  I heard some crashing on a far bank and instead of being one redfish raising hell, it was a school!  Nothing gets your adrenaline pumping more than running down a school of reds.  I hollered at James that we needed to head that way and followed them as they went through a small cut onto a flat on the other side of some islands.  As I’m sitting in the cut I see them swim right in front of me – 4, 5, 6, 8, 12, damn, they just keep coming!  Not sure how many reds were in that school, but it was an awesome sight.  I threw a fly in the mix and immediately got a hookup.  While waiting on James to make his way over I decided it was a good idea to throw my Matrix shad in there too and soon I doubled up, bent rods in each hand!  Utter gluttony I know, but I couldn’t help myself.  Meanwhile those two fish kicked up enough sediment that James had a hard time spotting anything and was never able to pull another fish out.  He was left with a rod in hand as I was giggling like a schoolgirl, he got a pretty good screenshot of it from his GoPro. 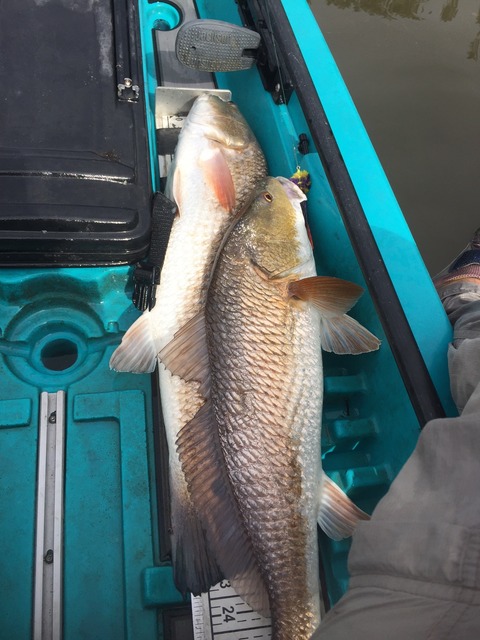 We lost the school after that and split up again.  I set up on a point for trout, and caught a few that were undersize, but kept getting distracted by reds that were crashing the shoreline at a nearby cut.  Of course I had to pull anchor and chase them down. 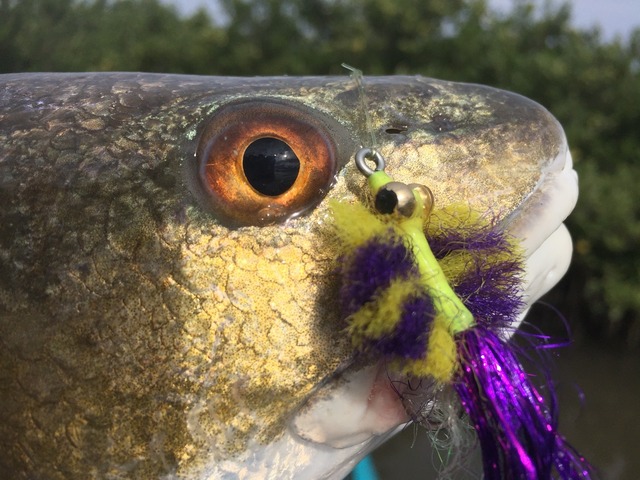 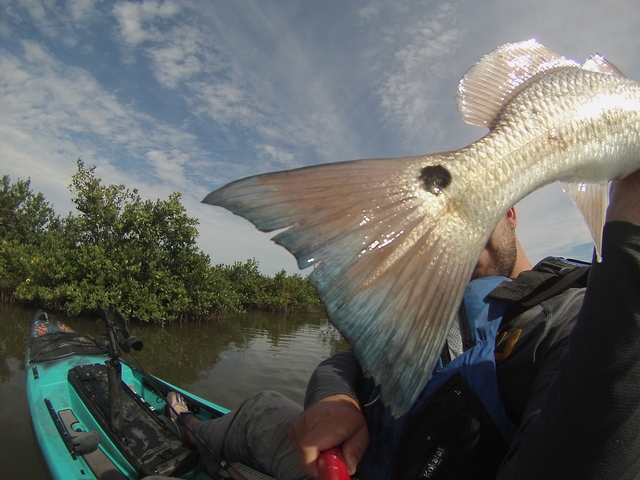 After the reds things slowed down through the mid-afternoon, they weren’t crashing bait like they had been earlier and everything went quiet for a while.  James and I eventually met back up and instead of heading out we decided to fish some marsh at the far end of a big pond. That marsh led to a cut that went from the big pond to a canal.  I worked each point in that cut and finally caught a decent fish, a nearly 19″ trout.

While I was hauling in that trout I hear James hooked up back in the cut, his reel peeling drag.  It was a big bull red and the fight was on!

Earlier in the day James had landed his personal best redfish at 29″, this beast was about to eclipse that, if he could get it in the boat.  The red had hit a topwater that James was throwing and it came from a bank in a cut that I had just worked – right place, right time.  After some good forearm pumping runs the red had given up and James was able to slide him over the bow for a brief photo op.

What a great way to end the day!  It always feels good when you’re not sure where to head in the morning and by the evening you know that you ended up making a pretty good decision because of the results. We paddled out as the sun was setting and made our way back to camp to meet up with the rest of the crew.  Jameson and Brooks from JK Media House would be getting in later that night, giving me an opportunity to paddle the new Cuda HD the next two days.   After the first two successful days of fishing I was hoping the action would stay hot as they were prepared to do a good bit of filming over the course of an entire week.

Was in the Houston area over Thanksgiving and on day one we made a trip to the Museum of Natural Science. That place was awesome, kids loved seeing all the dinos, I was fond of the fossilized fish #houstonmuseumofnaturalscience #texas #thanksgivingintexas #houston #choupique #gar #paddlefish #fossilizedfish #dinosaurs