Made it back on the water this past Saturday for BCKFC’s Redfish Rumble – the second tournament in their five tournament series. The event was held out of Sweetwater Marina in Delacroix but was open to all publicly accessible waters in St. Bernard and East Plaquemines parishes. The winner would be the person with the heaviest stringer of five slot redfish and one bass. In the past this event had always been held in West Plaquemines parish and never included a bass. I think the change was a good one; some of the prettiest water for redfishing is found in St. Bernard Parish and it is one of the few places I know of where you have the ability to catch bass and redfish on alternating casts. I love the fact that we now have a tournament that incorporates bass.

The tournament start time was 5:00am, which is a wee bit early when the sun doesn’t show itself until around 7:00am; so I started my trek down from Baton Rouge at 3:00am. I have not done a whole lot of fishing in St. Bernard or East Plaquemines so all of my scouting was done on Google Earth. Nothing new there, I do that for every trip whether it is somewhere new or not. I knew where a majority of folks would be launching and I wanted to fish somewhere different, somewhere without a big crowd, so I had a couple launch options in mind on the drive down. Option #1 didn’t work out. It was a pump station, but access to the pump station was gated so not wanting to trespass I headed to option #2. At option #2 there were a couple other guys launching, but that wouldn’t be a problem as there was plenty of water for the three of us – I was just looking to avoid the crowds. Water clarity at the launch was pretty good, even with the low tide, so I wasn’t looking to go anywhere else anyway.

I paddled out behind the two other guys and as they took the first cut I continued on, giving them ample room to fish. I made my way into the first pond and saw tails everywhere, for a second I thought, holy hell I’ve reached Valhalla! The horizon was just starting to light up as I began to fish so it was tough to see, but it didn’t take long to figure out that they were all gar. The pond was fairly shallow and covered in grass, the salinity couldn’t have been very high. I moved slowly through the area working weedless baits thinking maybe I’d get my bass. Then I saw a different tail and rather than move along the surface, it bobbed in place, I knew immediately it was a redfish, so I pitched a texas rigged Zoom super fluke jr. that way and it got hammered. I made a rookie mistake though, for some reason my drag was set super tight which made for a short fight and a green fish. I ended up reeling him too close to the tip top of the rod and as I got him in the net he flipped a few times and broke the tip section of my rod off. Not that big of deal since I had a few other rods, but still a bummer, at least I was on the board with a real deep copper colored 22.5″ red. I forgot how pretty the reds are when they come from the grass.

I kept at it in the same pond and soon saw another redfish tail dancing. This time I threw a 1/4oz gold spoon his way. The cast was way off, probably because I can’t think of the last time I threw a spoon, but it wasn’t too far off that I blew it. It was beyond him and way out in front, so I brought it back and dropped it dead in his path as he got close I gave it a twitch and started a slow reel, the redfish saw it and charged and soon after I had my second redfish in the boat. At 23.5″ it was a small improvement, but I was hoping for a little bigger.

I made my way out of the pond and into a bayou. There was no shortage of good water here, everything was covered in grass which made for pretty good clarity throughout. Blind casting I picked up a third redfish. Pretty fish too, he had 8 spots. At 20″ he went on the stringer, I was hoping to cull him later in the day. One word on stingers and redfish, if you run it through their lower lip and not through their gills they will stay alive. 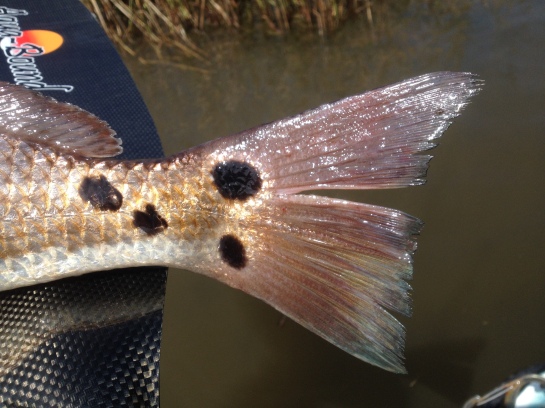 Moving through the bayou I was almost at a big bay when I see an entire redfish back out the water. He looked to be a pretty good size, maybe upper slot, maybe too big, it didn’t matter anyway because after making what I thought to be a good cast he spooked on the retrieve.

I worked the grass beds in the bay and came upon a redfish working the shoreline. This time when I made a good cast I was rewarded with another eat. This fish had some size to him too. After peeling drag a few times I brought him in the boat. At 28.5″ he was too big for the tournament. A real nice redfish, lots of fun to catch, but not the size I was after. 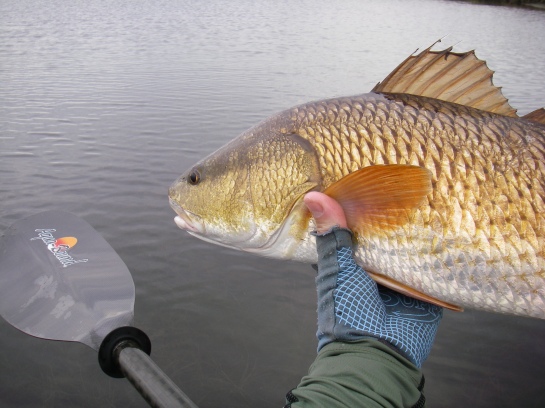 After a short talking to we parted ways. The bay failed to produce any more fish and I had drifted quite a ways. Rather than backtrack I sought out the same type of area I had caught them earlier in the day. I was already past the half way point so I started circling back to the launch, hoping I could finish out a limit and pick up a bass along the way. After a good paddle back up the bay and into a different cut I made it to a sting of ponds that were promising. A cast into fleeing baitfish landed me my fourth redfish. He went 22″ and I started to think my 23.5″ might be the biggest I would turn in – which usually isn’t how to break into the top five.

I continued my route through ponds and bayous blind casting to every likely spot, just trying to finish out a limit. Thankfully that fifth redfish didn’t make me sweat it out too long. He was caught on a 1/4oz gold spoon, just like the previous three fish. It was the best bait I had tied on for the conditions. I tried an inline spinner for awhile but it kept getting hung up on itself or tangling in weeds. Topwater failed to produce early on, so that got set aside the rest of the day.

The paddle back to the launch was pretty slow going, the tide had switched on me and I was fighting it all the way back. I picked up my stuff and hit the road to head to the weigh-in and made it there with 15 minutes to spare. My limit of reds came in at just over 21lbs, so they averaged around 4lbs each, but without a bass I had no shot at the top five. I ended up placing 9th (21.89 lbs), which isn’t bad considering we had around 70 people fishing the tournament. After the first two series tournaments I’m still in the mix, sitting at third, but it’s going to be tough to beat out those usual suspects.

A lot of familiar names in that top five, it always amazes me how these guys can consistently produce. There is no doubt about it, we’ve got some great fishermen in BCKFC. Steve took first thanks in part to a really nice bass, I think it was the biggest weighed in, a very fat marsh bass. At 6th place Eric Muhoberac’s stringer was also very impressive as it was only four redfish. Of course with a stringer like that he ended up being big fish winner as well with a 7+ lb red. Big congrats to the winners and a huge thanks to everyone in the club that made it happen and to all the sponsors that donated prizes.

After the tournament a group of us headed to Rocky & Carlo’s for supper. Health nuts be advised, here’s my meal: 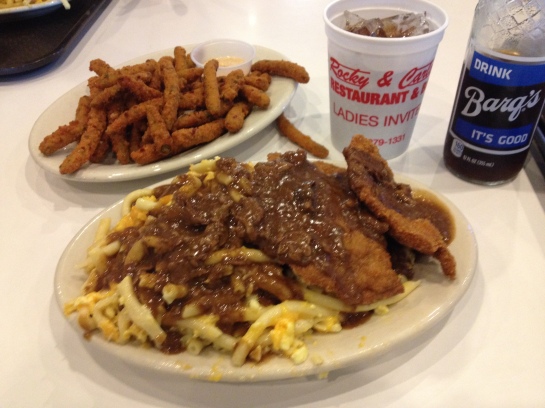 Veal cutlet and baked mac with brown gravy on top and a side of fried green beans for the table – yes, all of it was very good. It was my first Rocky & Carlo’s experience and it won’t be my last. In case you were wondering, catching a limit of reds and then having a meal with friends makes for a really great day.