First, a little Panama backstory. Back in October of 2012 I was fortunate enough to win a tournament and with that an opportunity at a kayak fishing trip of a lifetime fishing and filming an episode of Kayak Bassin’ TV with Chad Hoover. Unfortunately due to a sponsor conflict, going on a trip with Chad was proving to be very difficult. Lucky for me Jim Sammons joined the Jackson Kayak team during this time and with Heliconia Press producing both Jim and Chads shows, Chad saw an opportunity for me to join The Kayak Fishing Show on one of their shoots. Everyone involved thought it was a good idea and I got an invite to join them in Panama, and of course I accepted (no-brainer).

Having never done any offshore kayak fishing or really any fishing abroad there was a fair amount of prep work I needed to do before leaving. I borrowed rods and reels(thanks Blake Matherne) that would be sufficient for pelagic species and bought a lot of new tackle because everything I owned was intended for inshore and freshwater species. Expect to spend a few hundred dollars (On the low end – I’m cheap) on poppers, swimbaits, diamond jigs, circle hooks, and leader material.

I was joining a trip comprised of Jim Sammons – host of the show and fellow Jackson Kayak team member, Will Richardson – producer/videographer/photographer/wearer of many hats for Heliconia Press and James McBeath – director of marketing for Jackson Kayak. Our outfitter/guide was Hennie Marais with Paddle Panama who had his brother Peter along to help run a smooth operation. As it turns out Peter is a world class grillmaster and proved to be an excellent addition to the expedition team.

Since everyone was flying in from different parts of North America (the 2 Canucks, Jim from San Diego and myself from New Orleans) the plan was to rendezvous in the Houston airport while en route to Panama City. Unfortunately I had a very short layover and was running behind. I ended up being the last person in line at the gate and with no seat assigned I was rewarded with the last seat available – 41F – the window seat on the last row of the plane. Normally I’d complain, but I was really just happy to have a seat, especially after the gate agent informed me that my passport was 13 days away from being unusable on a trip to Panama. Apparently your passport has to be valid for 90 days when traveling to Panama and mine is good for 103 days. Phew…

I made it to Panama City, got through customs, picked up my bags (which made it despite my short layover), and met everyone as our taxi was being loaded up. Jim and Will I had only previously exchanged emails with while James I fished with in the Everglades, way back in 2011 when I first joined the Jackson team. We were hungry so naturally where does one go when in Panama City. Why T.G.I. Friday’s of course! 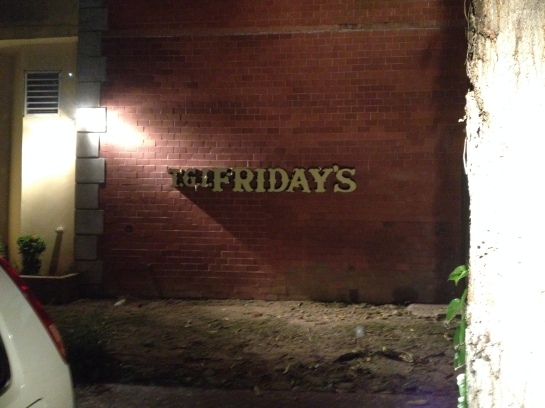 Apparently the restaurant Hennie wanted to take us to was closed and this was close by. Take comfort in knowing that the T.G.I. Friday’s in Panama looks exactly like every single one in America. It wasn’t all bad, they still had local beer. 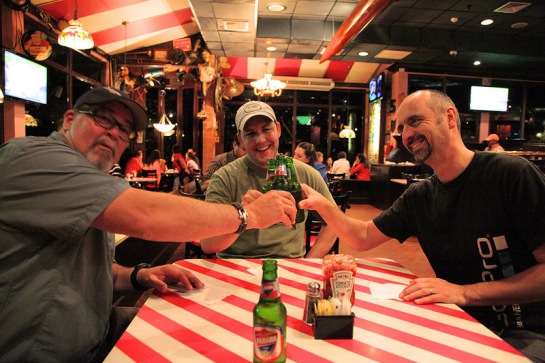 Weary from travel we called it a night after Friday’s. We were taken to our hotel, a little B&B called the Canal Inn. A cold shower and a stiff bed never felt better. I slept as well as I could but I was very excited about getting to our final destination, Bahia Honda, and going fishing.

Day 1 was travel by air, day 2 was travel by land and sea. We were looking at a 4.5 hour drive from our hotel to Santa Catalina, where we would then board a panga that would take us another 1.5 hours up the coast to Bahia Honda. We did finally get to eat some local food for lunch when we stopped in Santiago. It was buffett style and I have no clue what I ordered, but it was pretty good (Panamanian Fresca is more like American Fanta). We loaded up on supplies at a local grocery then continued on through the Azuero peninsula. 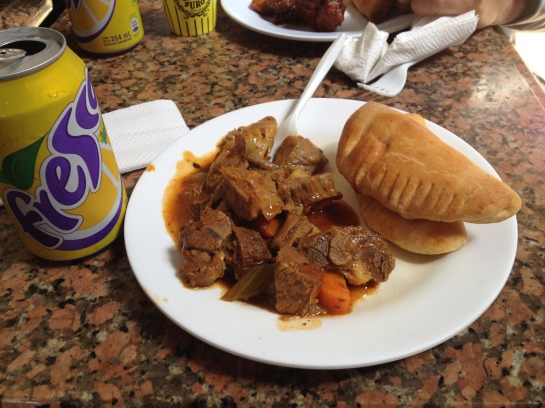 The drive through Panama was nice, everything looked so arid, but I guess that’s why it’s called the dry season. Sugarcane was the crop of note (in St. Lucia it was bananas), but the difference between Panamanian sugarcane and Louisiana sugarcane was the fact that theirs looked ready to harvest. Roads were surprisingly good, some rough spots here and there, but overall good, of course take my opinion with a grain of salt, Louisiana roads are terrible. We made it to Santa Catalina and drove right out onto the beach to load our gear on the panga. There we were greeted by our host for the week Edwin and through spanglish he and I discussed a little bit of fishing, enough to get me excited about the week to come. It was about this time that we realized we made a huge error. One of Jims bags was left back at the hotel. It had been left in our room during the commotion of loading the van in the morning. Important takeaway here is to always do a dummy check before you leave a hotel. We would get the bag back later in the trip, but it was a costly mistake for sure. Still, the Pacific Ocean was beautiful at this spot. Santa Catalina is a big surf destination in Panama, but it didn’t look like it here. 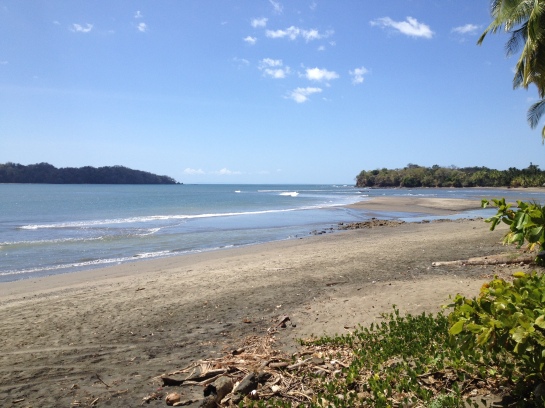 The boat ride up the coast was awesome. The water was so blue and the elevation of the mainland provided a really nice backdrop when cruising up the coast. Not seeing a bunch of other boats on the water was really refreshing as well. 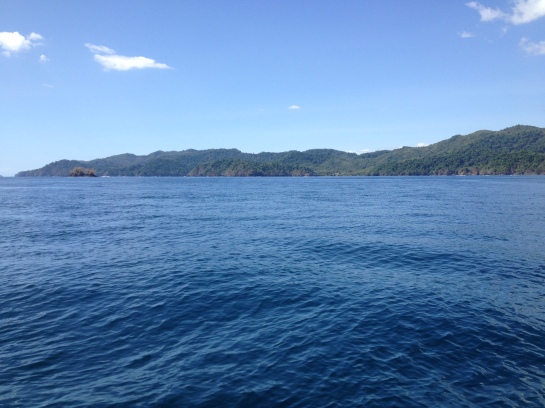 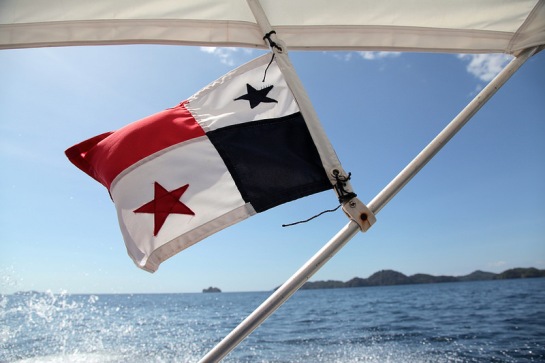 Our destination was Edwins house, which was located on the mainland in a protected bay just off the Pacific. Their set up was incredible, with two thatch roof bohios that served as lodging and a plumbed bathroom, it would prove to be a perfect base camp for the week. While Hennie and Peter were busy getting everything set up we started rigging up our rods, reels and kayaks. We had brand new boats, two Cuda 14s and a new Big Rig to use while we there. James chose the Big Rig, having fallen in love with it in Florida, Jim went with the lime Cuda 14 while I chose orange. 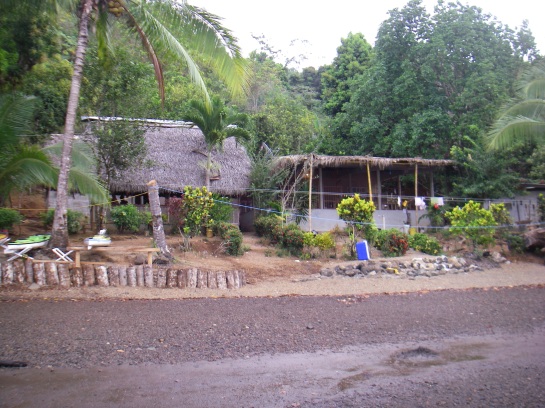 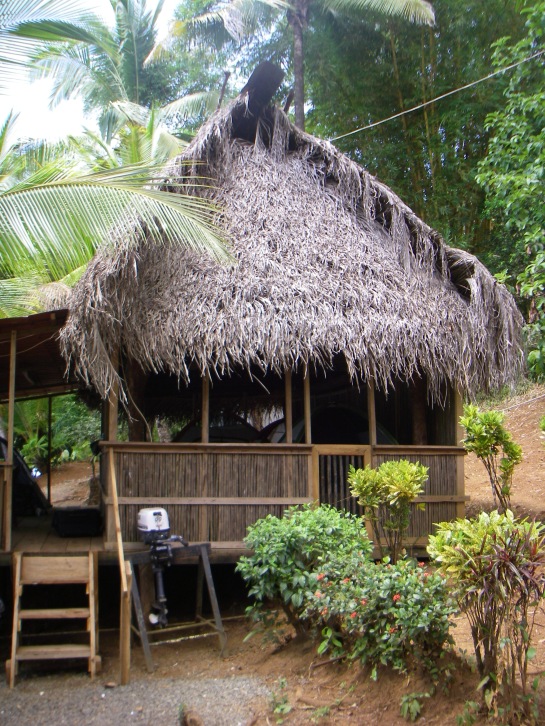 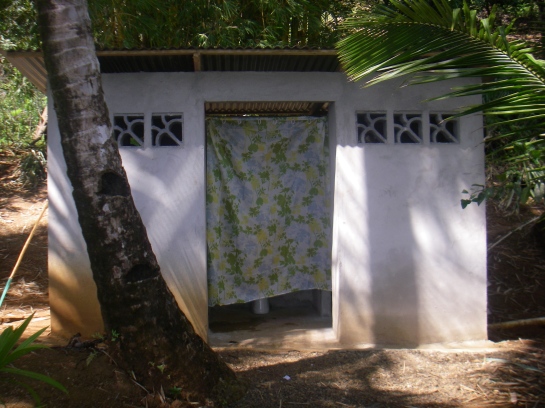 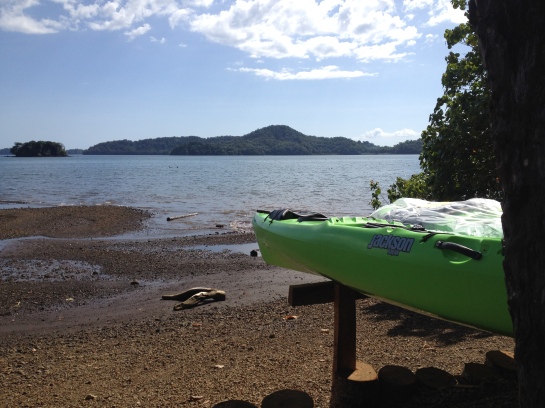 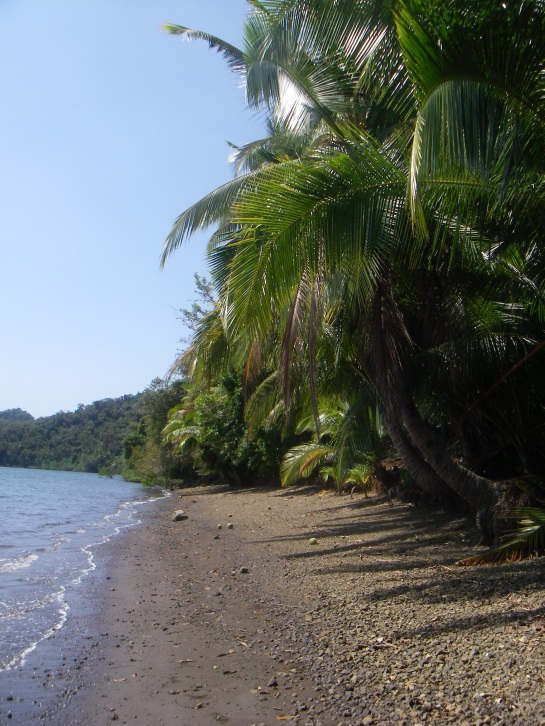 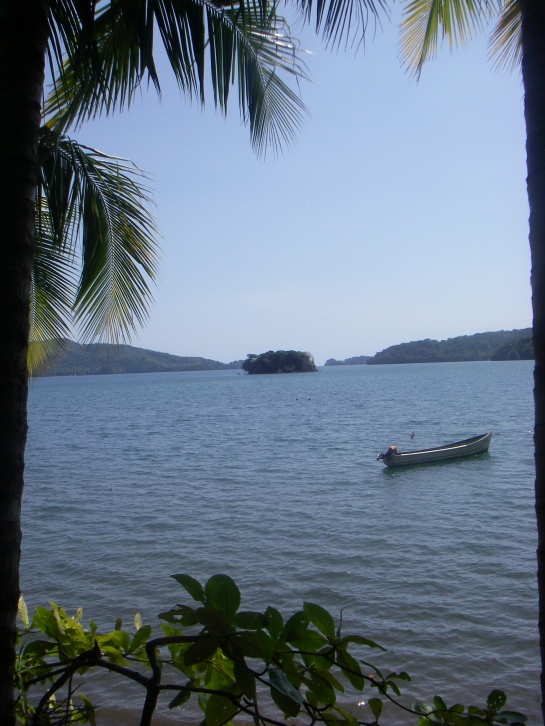 Once we were moved in and squared away it was time to hit the water. We would be able to get in a short afternoon fish before it got dark. I was dying to get on the water, you could tell from shore that bait was busting the surface all over the bay. The activity even picked up as we were on the water, but I was having trouble getting a bite. I was playing a cat-and-mouse game with the fish trying to get a lure to the surface activity while it was within casting range. On top of that all the lures I brought seemed too big for what these fish were feeding on. I had on the smallest lure I had, a 5″ soft plastic swimbait and did what I could. It was good enough and I was able to boat a nice little bonito. Catching fish on what I would consider a travel day was a great way to start the trip. Shortly after this fish we ran out of light and paddled back to camp. The short afternoon session was the perfect way to whet the appetite of this long traveled fisherman. I was looking forward to getting some rest and then hitting the big water bright and early in the morning. We had a long week ahead of us. 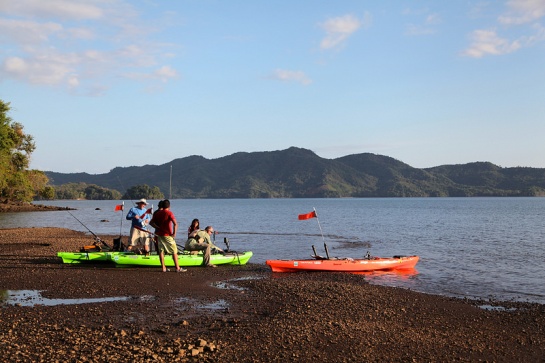 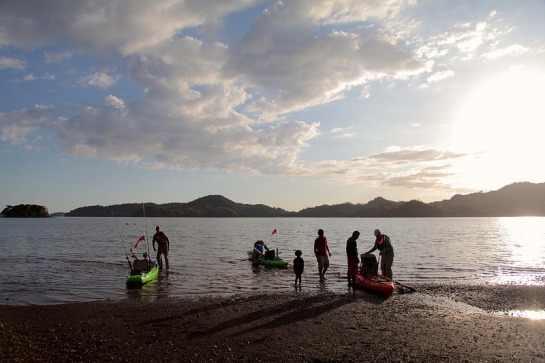 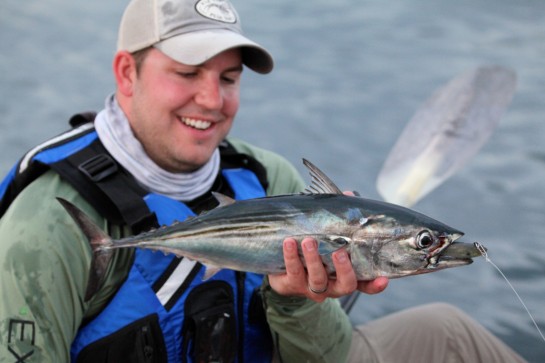