Got out again in the Kilroy this past weekend and with favorable conditions on the coast I made the long drive south to fish for reds.  I hit an area that is new to me, but was recommended by a friend at Paddlepalooza.  Another benefit to an already long list of reasons to attend a BCKFC tournament and stay through the weigh-in is just talking to and learning from your peers.  There is a lot that is lost in translation if all your research and knowledge-base comes solely from the internet.

I arrived at sunrise and worked a topwater early, but to no avail.  I was hoping to stumble upon a few trout, but that wouldn’t be the case as the day progressed.  Working Gulp under a cork began producing small redfish.  They were tagged and released and hopefully in the future Tag Louisiana will give me an update on these fish.

Conditions were pretty good throughout the day.  As you can see, winds were calm and it was very overcast – seemingly perfect conditions to walk the dog, but I didn’t have any luck.  It didn’t much matter as the water clarity was pretty good in the grassy areas and I was able to sight fish reds with either the fly rod or on spinning tackle using a good ‘ol tight lined Matrix shad. 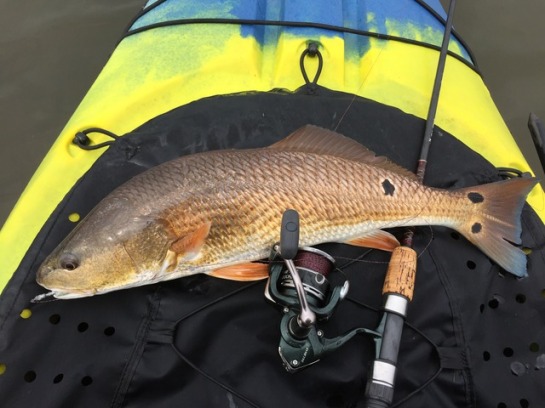 The reds went from 13″ up to 23″, so no big upper slot reds or junior bulls were had, but it was a lot of fun just catching consistent fish throughout the day.  Most of the fish I caught came on the fringes of the grass or around cuts and points, I didn’t mess around with any of the thick grass.  A few of the fish I caught were pulled from schools, which are always fun to see and hear.  You’ll just be minding your own business when all of the sudden around a point comes a wave of red terror, with bait popping out of the water in front of it, looking for any escape.  It doesn’t matter what you throw in front of the red mass, it just matters that you throw something.  It was a lot of fun trying to pull of the double by throwing the fly rod first, getting a hook set, then picking up the paddle tail and pitching it in the area.  I wasn’t able to connect this time around, but it is always a hoot to have the opportunity.