Earlier this month I spent the week at the beach for a much needed family vacation.  I had planned on doing a little kayak fishing at some point during the week, but when I got in beach-mode those plans sort of tapered off.  I brought an Orion 65 to use for keeping drinks in the room cold, freeing up space in the fridge for food.  This would be the first real opportunity for me to put it to the test.  We filled it with two 10lb bags of ice and room temperature beers and waters on day 1….

….and by day 5 we were left with cold water and still a few chilled drinks.  It was kept in an air conditioned condo the whole time and saw plenty of opening and closing of the lid.  Not exactly a real scientific test, but I was happy with how it performed.  I fully intended to take a daily picture, but I dropped the ball on that.  The only other shot I got was from day 3 when we had to add more beer…. 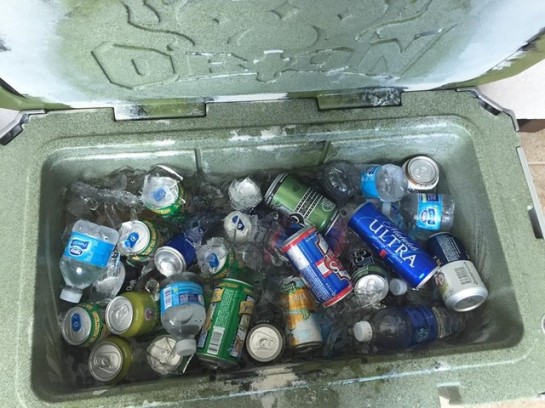 By the end of the trip I found the Orion to be more than adequate for my family vacation.  I know my research was hardly anything you could use for comparison sake, but more of a real world example. I’m not equipped for comparisons, I’ll leave that up to the professionals.  Just so happens one came out recently from the folks over at Rokslide Essentials – http://www.rokslide.com/2012-01-09-05-09-42/essentials/363-the-big-cooler-showdown

As you all are probably aware, I’ve been out.  Away on a vacation that didn’t include any fishing – shocking, I know.  I had a great time too.  I’ll share some pics soon, but a lot of other things happened in my absence.  The IFTD/iCAST show was last week and we saw a lot of new product hit the streets(pardon the drug reference).  Jackson Kayak wasn’t in attendance, they will be at Outdoor Retailer in August, but that didn’t stop them from making a few announcements.  We found out they will be coming out with their own line of coolers, Orion Coolers – made in their factory in Sparta, TN.  Like their kayaks, Orion Coolers will be outfitted to the nines straight from the factory.  They will come with YakAttack rails, aluminum bottle opener tie downs, and a non-skid standing pad.  Expect to see them this Fall, in a 25, 45, 65, and 85 quart capacities.